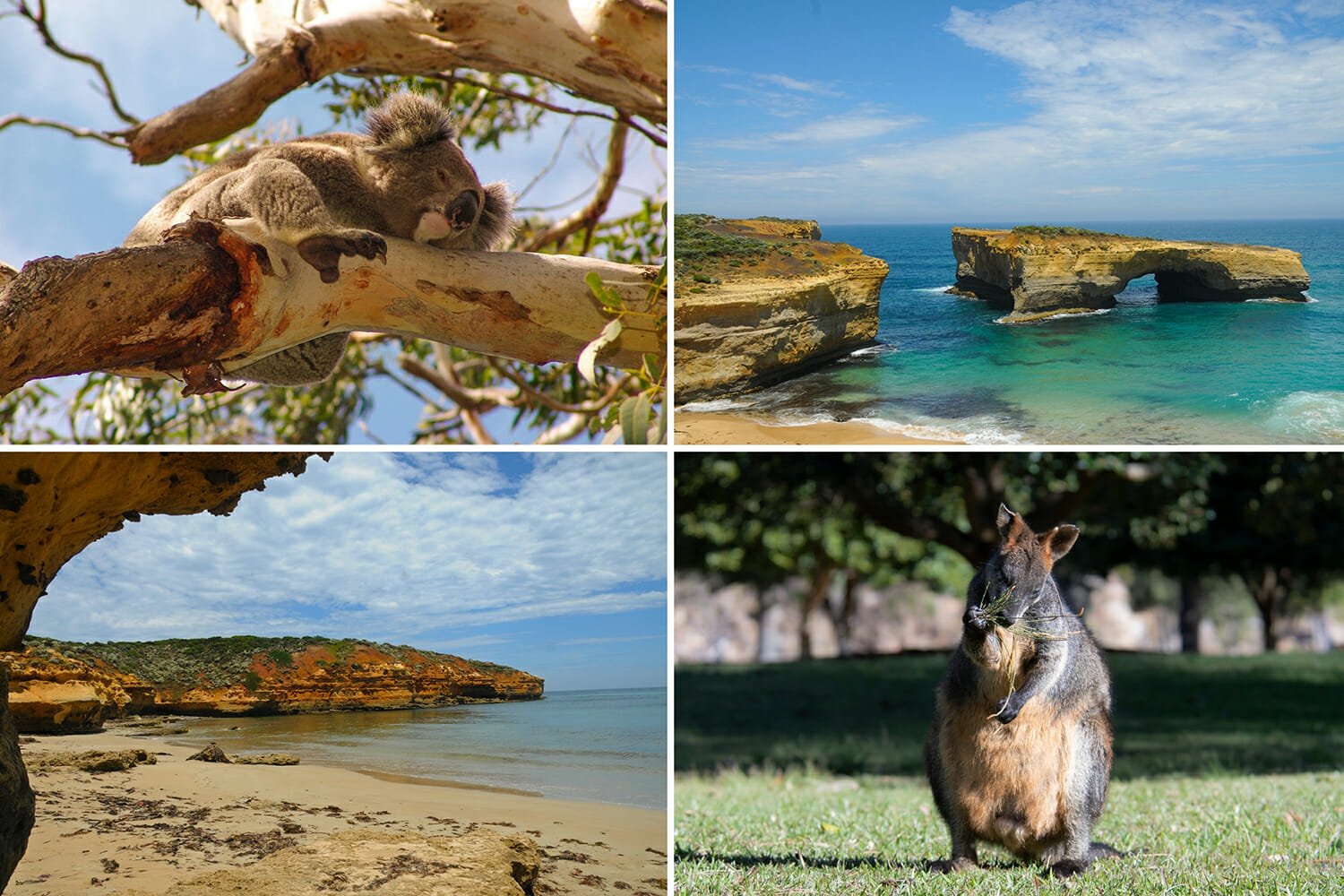 Great Ocean Road is Australia’s most iconic scenic drive. It follows the south-eastern coast of Australia through the rainforests of Great Otway National Park, past sandy beaches and rugged coastlines. It is also a good spot to see some of the Australian native wildlife.

Before you go: Great Ocean Road is one of Australia’s most popular holiday drives, especially during the school holidays in Victoria, so if you are planning to travel during these times, make sure to book your accommodation in advance.

Mt Rothwell is a wildlife sanctuary about an hour’s drive west of Melbourne. The 450ha property is surrounded by a predator-proof fence and has been converted to its pre-European state. The sanctuary supports an impressive number of rare mammals that are managed for conservation and research.

During a drive around with the rangers, we saw Eastern Barred Bandicoot, Southern Brown Bandicoot, Rufous Bettong, Brush-tailed Rock Wallaby, Black (or Swamp) Wallaby and a Common Ringtail Possum with a very small young.

Afterwards, the rangers took us to the pens where Eastern Quolls were quarantined prior to their release onto the sanctuary grounds.

The following morning we headed down to Torque – the start of the Great Ocean Road.

The Great Ocean Road is such a feast for the eyes, you stay in a constant state of awe for the entire drive. The road runs for 243 km along the spectacular coastline between the Victorian cities of Torquay and Allansford. We drove as until Warrnambool with a night at Port Campbell and then headed to Grampians National Park.

The first town along the Great Ocean Road is Lorne. The roadside trees in Lorne are good for spotting some of the Australian parrots, like King parrots, Crimson rosellas and, of course, the wonderfully obnoxious Sulphur-Crested cockatoos.

Leaving Lorne, the road hugs the coastline towards Apollo Bay. This is a stunning stretch of the road, travelling between the sheer cliffs of the Otway Ranges and the stunning coastal cliffs.

But before you get to the Otways, take a detour to Anglesea Golf Course to see the Eastern grey kangaroo. The sightings here are so common that they even run Kangaroo tours.

Another detour to take from Lorne is Lake Elizabeth near Forrest. This is one of the known hotspots where you can spot a wild platypus. They are shy animals and take some effort to find.  For the best chance of spotting one, take a tour with Otway Eco-Tours at dusk or dawn to canoe Lake Elizabeth in search of these stealthy critters.

We took a quick detour to Great Otway National Park to spot some koalas in the wild. Great Otway National Park protects the coastal rainforest habitat in the Otway Ranges. It is the perfect spot to experience the Australian wilderness, see waterfalls, like the famous Triplet Falls and spot some local wildlife, like the swamp wallabies and koalas. Although the best place for spotting koalas is Grey River Road in Kennet River Town.

Accompanied by professional ecologists, you will be able to see koalas snooze in the treetops, potoroos, and bandicoots forage on the forest floor, and kangaroos hop across the open areas.

A curious bit of trivia: the experience is designed by Brian Massey, who was the Greens Master for “The Lord of the Rings” trilogy, Art Director of ‘The Hobbit’ and landscape designer of the highly successful ‘Hobbiton’ in New Zealand.

Coming out of the Otways, the road hugs the coast and enters Port Campbell National Park. This is the most famous section of the Great Ocean Road, featuring an amazing collection of rock formations known as the 12 Apostles, which have been carved out of the headland by the fierce waves of the Southern Ocean.

Formed over 20 million years through weather erosion that separated them from the coastal cliffs, the limestone giants tower 45 meters above the crystal blue ocean. At the time the rocks were named, there were 12 structures, but over the years for of the pillars crumbled down leaving only 8 of the apostles standing today.

While not as old and dramatically contorted as the famous Glasshouse Rocks in Narooma, the Apostles are incredibly picturesque. They are stunning at any time of the day, but they are at their best in the golden light of the rising sun.

Just a few minutes down the road from the Apostles, Loch Ard Gorge is one of the most stunning beaches on the Great Ocean Road. The coastline is particularly weathered in this part of the drive, with many unexpected shapes carved by the elements in the rocks.

As you explore the coastline, keep an eye out for local wildlife. On top of kangaroo and wallabies, koalas and platypus, you can spot Nankeen kestrels nesting on the steep cliffs, herons and oystercatchers strutting along the beaches and Short-beaked echidnas foraging on the sides of the road and along forest trails.

If you visit the Twelve Apostles at dusk, keep an eye on the beach below as the sun moves lower in the sky. You could spot the Little Penguins as they emerge from the ocean onto the beach.

London Arch used to be a dramatic bridge connected to the mainland, so you could walk over to the tip of it. When the arch closer to the mainland collapsed in 1990, it left two tourists stranded on the isolated tip of the bridge until they were rescued by a helicopter.

Another dramatically weathered formation, The Arch can’t be approached from the road, so you end up looking down on it from above. It is a good spot to appreciate the power of the surf as it assaults the rocks and to visualize the fate of London Bridge.

Most people driving the Great Ocean Road, spend the night in the coastal town of Port Campbell. But if you are a nature lover, and feel like a splurge, consider staying at Alkina Lodge, a 20-km drive from the Twelve Apostles. The lodge gives you an opportunity to immerse yourself in nature and wildlife of Great Ocean Road. You can spot kangaroos, wallabies, koalas and a plethora of native birds at Alkina.

We took the road as far as Warrnambool, where we left the coastline and headed inland to Grampians National Park.

If you are visiting in the cooler months, you have a chance to spot Humpback whales on their migration along the coast. There is even a whale nursery at Logan’s Beach in Warrnambool, where mothers bring their calves to rest during their long journey.

If you have some time to explore around Warrnambool, check out the Tower Hill Reserve. Walk the trails in the reserve and might spot kangaroos, wallabies, koalas and even emus.

Stretching over 167,219 hectares, the Grampians is a series of rugged sandstone mountain ranges covered with forest and rich in wildlife. We only had one afternoon in the Grampians, but it was enough time to spot a swamp wallaby and some nice birds: A red-capped robin, Eastern yellow robin, a Whipbird and a White-throated treecreeper.

There are a number of dramatic lookouts in the park, and we made sure to visit at least one of them. Formerly known as the Jaws of Death, The Balconies tower over Victoria Valley, which seems to stretch forever. Luckily, it is one of the easier lookouts to reach in the park, lying only two kilometres from the Reeds Lookout Carpark.