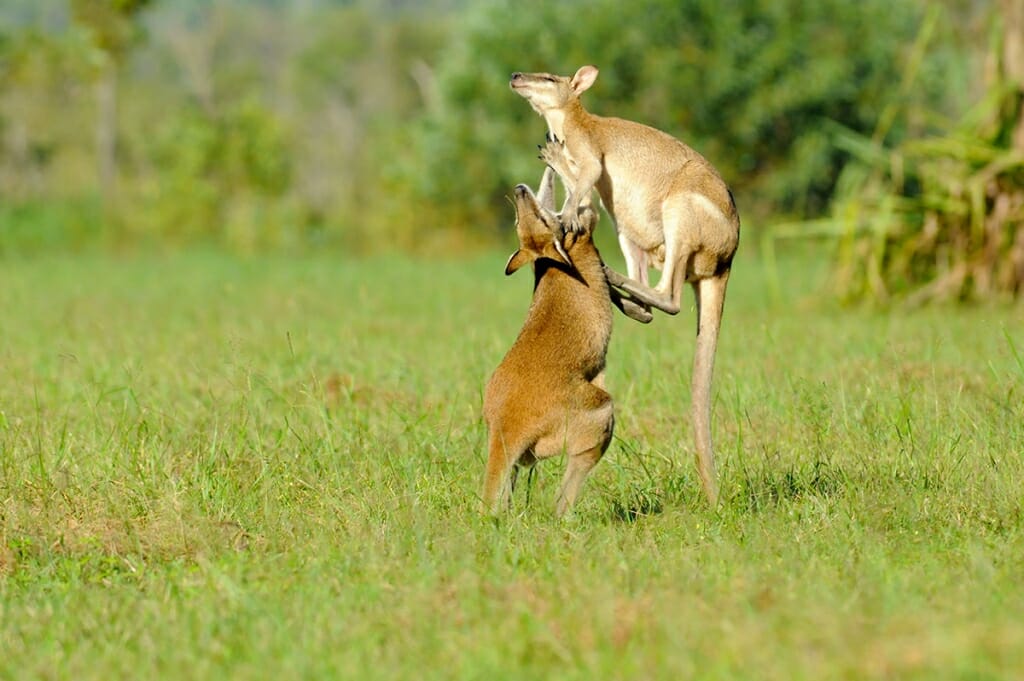 Driving from Kakadu to Darwin on Arnhem Highway we saw more birds and reptiles than you would see in a month in the drier parts of Australia. The countryside surrounding the highway could well be a National Park.

And there are plenty of eco-lodges along the way that offer various wildlife watching opportunities. We stayed at Mary River Wilderness Retreat and took a cruise on Mary River.

Mary River Wilderness Retreat operates boat cruises, and it is also possible to hire a smaller boat for a few hours and explore the river at your own pace. We did both and saw the Freshwater crocs, Saltwater crocs, eagles, kingfishers, and plenty of more common birds that we have already seen elsewhere on this trip.

In the afternoon, just before the boat cruise, I watched a group of Agile wallabies grazing on the lawn in front of our tent. And as I watched them, two young males decided to practice their boxing skills, giving me a few good photo opportunities.

There were many birds chirping around the lodge, the parrots being the most conspicuous and most colourful.

Apart from the magnificent Jabirus, there were Pied herons, Great and Intermediate egrets, Gull-billed terns, and a few Magpie geese on a nearby tree.

We also saw our first Water Buffalo along the highway – the largest introduced animal in Australia. These giant bovids were introduced to Australia between 1824 and 1849 and became a feral species, wreaking havoc to Kakadu wetlands and other areas. The only predators big enough to snatch a water buffalo are the saltwater crocodiles that share the wetland habitat with the buffalo.