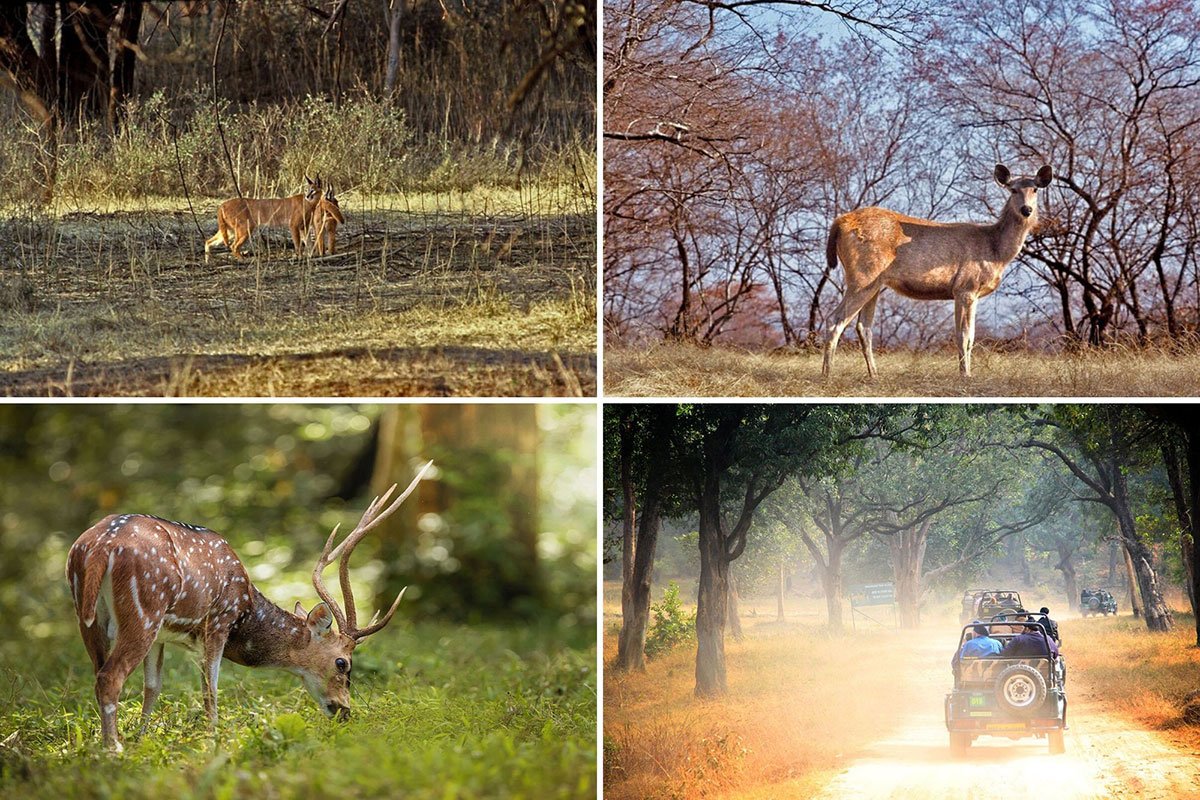 In this post hide
1. Sawai Madhopur
2. Wildlife safari on a communist-era bus
3. Ranthambhore National Park
4. Caracals in Ranthambhore
5. Crocs and jackals and eagles, oh my…
6. More in India

When I arrived at Sawai Madhopur – the first stop on my Rajastan itinerary, at 5 am,  it was still dark,  the only light was coming from the fires lit up on the street. A great score of rickshaws assailed me as soon as I set my foot on the platform.

I picked a guest house from the book and shouted out the name of it. A skinny man clothed in rags pushed his way through the crowd, tapped me on the shoulder and nodded with a smile repeating the name of the guest house. I took it as a sign of confirmation that he knew where I wanted to go and followed him to his rickshaw.

Fifteen minutes later, I was knocking on the door of the guest house. Another five minutes passed and I was still knocking. I was starting to despair when I heard the sounds of life inside. The door opened and a grumpy keeper with sleepy eyes and messed up hair let me in. Inside the guest house was as dark as the night outside.

While the grumpy keeper was recording my details I took a moment to look around. I was peering through a dark window of a souvenir shop when I heard the steps of someone coming down the stairs to the lobby. At first, I thought my eyes were having difficulty adapting to the perpetual darkness, but as he came up closer I saw to my amazement that it was a western man. I have never been so glad to see a westerner before.

His name was Nick and he was travelling through India with his wife Kate. They were in Ranthambhore to see tigers, just like me and it was time to leave for the morning wildlife safari. I barely had time to drop off my bags in the room when a great noisy bus rolled up at the gates and sounded the horn.

Wildlife safari on a communist-era bus

To start with, a bus is not exactly the type of a vehicle that comes to mind when most people think about a safari. But this bus defied all reason. It was as big as it was old. And it produced such an ear-shattering rattle as it moved that I was absolutely sure we woke up every single person in the village as we drove through it. The only animals we would see driving through the forest in this monster of a vehicle would be the deaf or the paralyzed ones.

The morning air was freezing but only a couple of the windows on the bus actually had glass in them. That was probably a good thing for the forthcoming safari though.

Ranthambhore National Park stretches across an area of 1,334km² on the eastern edge of the Thar Desert in Central India. Once the hunting grounds of the ruling family, today it is famous for its tigers which became diurnal in habit and are used to tourist vehicles.

The landscape of the park is dominated by dry deciduous forests and occasional dry stretches interspersed with stream beds.  The park is studded with remnants of its historic past. Old defensive walls, wells, mosques and other structures bear mute testimony to kingdoms and battles long forgotten. Overgrown with papal trees, they blend with their natural surroundings, creating dreamy, fairy-tale-like scenes in the jungle.

Six man-made lakes are the central focus of the park and many perennial streams criss-cross the entire park. The lakes gave rise to a number of adaptations among the wildlife that are unique to Ranthambhore. Sambar deer, for example, developed a habit of feeding on the rich plant life growing on the bottom of the lakes. The deer enter the water almost chest-deep to graze on the aquatic plants.

Tigers have also adapted to the aquatic features in their environment. Ranthambhore is the only place in the world where tigers have taken to driving their prey into the lake during the chase. Once in the water, the tiger uses its superior strength to capture its prey and to deliver the killing bite.

Ranthambore lakes provide an arena for a wide variety of social activities for the park’s numerous wildlife species. Sambar deer, Wild Pigs and Chital Deer congregate in large numbers on the lake shores and spend their days grazing, playing and relaxing in the open, which gives them a good opportunity to see danger a long way away.  The main predator in the lakes is the Marsh Crocodile. Ranthambhore has become well-known for its crocodile – tiger conflicts that arise over captured prey.

The smaller lakes and some of the big streams provide a cooling place for tigers during the dry months. In contrast to most cat species, tigers enjoy the water and can be often found submerged in a pool during the heat of the day. Unfortunately, I did not see any tigers in Ranthambhore during the four days that I spent in the park.

Having experienced the ‘bus safari’, Nick, Kate and I were prepared to go to great lengths to find a different mode of transportation. Nick managed to find a jeep in town and the three of us booked it for the remainder of our time in the park. The jeep came with a driver and a guide and was in excellent condition. The next three days were amazing.

In mid-morning of the first day we were treated to an incredible sight – a Caracal (Felis caracal) family – female with three cubs. Caracals are one of India’s most elusive wild cats and even the forest guides consider themselves lucky if they see one every year.

The family was not disturbed by our arrival – we stopped the jeep as far from the cats as we could. It was only due to the excellent spotting skills of our guide, that we saw them at all. The rusty coloured coat provides excellent camouflage for these cats in the dry landscape of an Indian forest.

We watched the cubs play for at least 20 minutes. Their mother remained in the shadows for most of the time, keeping watch over the surroundings, alert for the slightest sign of danger. The cubs, on the other hand, seemed completely oblivious to anything but each other.

Eventually, the female has seen or heard something she didn’t like and lead her family away. This amazing sighting easily compensated for the lack of tigers in Ranthambhore.

Crocs and jackals and eagles, oh my…

About a kilometre down the road from the spot where we saw the caracals, we came across a Golden Jackal scavenging on a tiger’s kill. He seemed to be the first to arrive at the scene and managed to enjoy his lucky meal in peace and quiet. Another notable predator of Ranthambhore is the Marsh Crocodile. This species is extremely adaptable and can live in any freshwater habitat, from large reservoirs to small streams. During extreme dry months, they make deep tunnels or even trek miles overland throughout India.

As we drove around the park for the next two days, we mostly saw more of the same species. The Nilgai or the Blue Bull (Boselaphus tragocamelus) – India’s largest antelope, Common Langurs and lots of Sambar deer.

The birdlife of Ranthambore is amazingly diverse, though I was so preoccupied trying to spot a tiger, that I paid little attention to the birds. One morning when we stopped for a cup of Indian sweet tea, called cha, a brilliantly coloured Rose-ringed Parakeet landed on a branch just in front of me.

A noisy Tree Pie was another species that attracted my attention during a tea stop. Crested Serpent Eagles were quite abundant in the park and easy to see due to its large size. These, plus the Egrets and the Stork at the lake made up all of my bird sightings at Ranthambore.