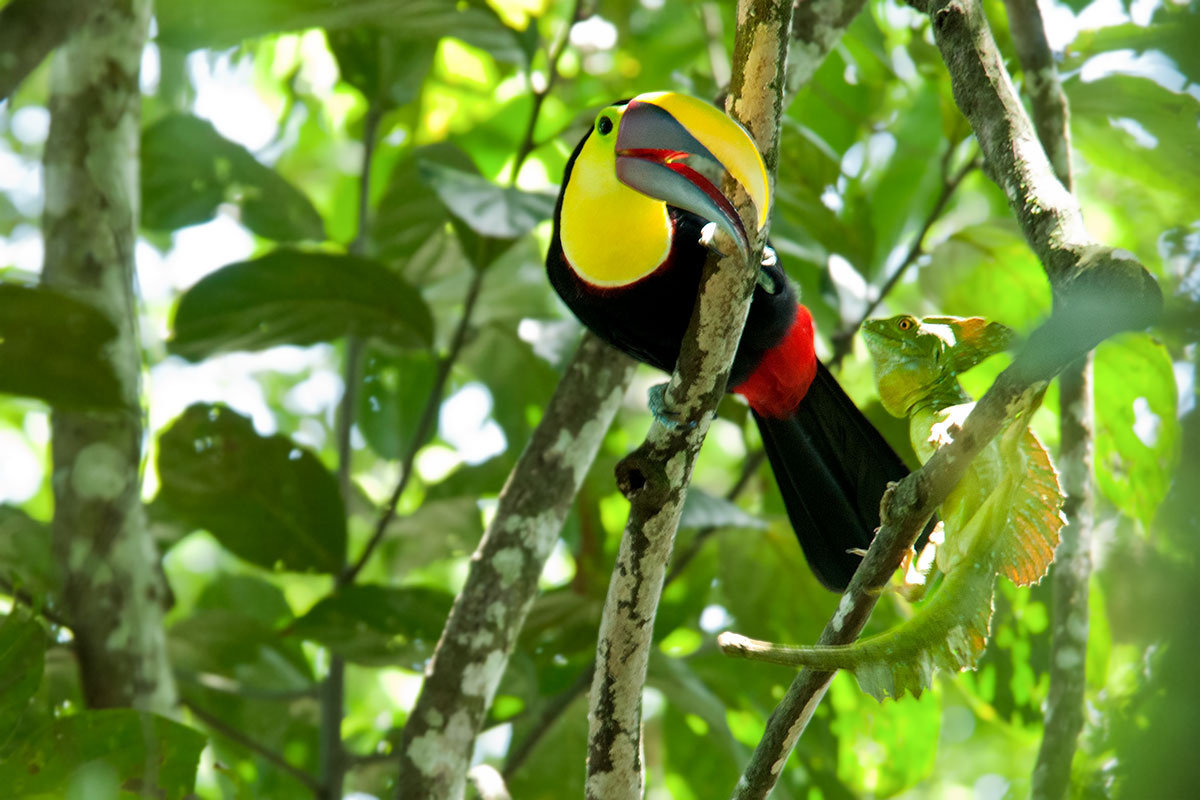 Keen to experience the magic of the tropical rainforest in Costa Rica? Love spotting wildlife on your travels? Then spend a couple of days wildlife watching in Tirimbina Lodge and Rainforest Center.

Tucked inside a protected patch of beautiful rainforest, Tirimbina Lodge in northeastern Costa Rica serves as a research station as well as a lodge. It is home to Costa Rica’s longest suspension bridge that stretches for 262 meters over Sarapiqui River. It is also one of the most affordable places in the country to experience the rainforest and its inhabitants.

Tirimbina is well known for its population of Honduran white bats, but as luck would have it, the recent floods have destroyed the patch of Heliconia where the bats used to roost, and the chances of finding them elsewhere on the property were pretty slim.

But there is so much more to Tirimbina than the handsome bats. We spent two nights wildlife watching at Tirimbina and had some of the best wildlife experiences of our entire Costa Rica road trip. I would highly recommend adding Tirimbina lodge to your Central American itinerary.

We decided to stay anyway and tagged along to the spotlighting walk to see what critters were out and about. The walk started with the crossing of the bridge, and that bridge is long. Very long. Thankfully the world below it was engulfed by darkness so you couldn’t really tell how high above the river you were.

The bridge had definitely seen better days when the wooden planks comprising the floor were not missing and the rails didn’t open into the black void now and then. But we did come across a Northern raccoon (and thwarted his bridge crossing plans!) and a Hoffman’s two-toed sloth in a tree by the side of the bridge.

Amphibians were out in force: Emerald glass frogs, Brilliant forest frogs, Broad-headed rain frogs and Dink frogs. We also spotted both: a Fer de lance and a False Fer de lance, as well as a White-headed snake.

Tirimbina lodge, while quiet has the feeling of an active research centre: insect traps stashed in the corner, a pair of mud-encrusted gum boots leaning against the wall. If you ever wondered about the life of a tropical field researcher, Tirimbina is a good place to get a taste of it.

We had an early breakfast at the lodge and as we set on the veranda of the still empty restaurant,  the air was filled with the crackling sounds of frog calls coming from every flower bed around us. There seemed to be frogs everywhere, we just couldn’t see them.

Eventually, our efforts paid off when we discovered tiny little Strawberry poison dart frogs. You would think it would be easy to see a frog with the vividly red body and bright blue legs among the brown leaf litter, but these guys are so small, it took some serious effort to locate them at first.

But once we knew what we were looking for, we soon became experts at finding them. They were literally everywhere around the restaurant.

Exploring the trails at Tirimbina

Once we’ve seen enough Strawberry poison frogs to last us a lifetime we headed to explore the trails in Tirimbina Reserve.

To get to the reserve from the lodge, you have to cross one of Costa Rica’s longest suspension bridges that stretches for 262 meters, 22 meters above the Sarapiqui River.

I was a little nervous crossing the bridge last night in total darkness, but in broad daylight I found the bridge to be even more intimidating, exciting and nerve-wracking. For once, you can see exactly how far you could fall. On top of that, you can see just how long it really is. It feels endless. And being a suspension bridge, it’s not the most stable terrain. So even if you are not afraid of heights, crossing this bridge is quite an experience.

The Canopy Bridge is not as long as the one over the river but it is higher above the forest floor. It stretches for 110 meters at the height of 35 meters and puts you right next to the birds and canopy-dwelling mammals.

From the trails, we returned to the lodge and spent the rest of the morning birdwatching on the lodge grounds. Of all the places we visited in Costa Rica, Tirimbina lodge was probably the best bird-watching spot. We saw some stunners this morning: the magnificent Keel-billed toucan, a Collared aracaris and a number of Black-mandibled toucans.

One of the toucans I was trying to photograph was very restless, constantly moving and shifting on the branch and making quite a racket.  Only later, when I looked at my photographs I discovered the reason for the bird’s restlessness.

Camouflaged among the green leaves a Green iguana was sitting on the same branch. Obviously, neither the bird nor the lizard felt like having company. And considering the size of the toucan’s bill, the iguana had a lot more to lose, than its perch.

The green iguanas were everywhere at the lodge. And most of them were much easier to spot, despite their perfect camouflage!

This was all well and good, but our main reason for coming to Tirimbina was to see the White Honduran bats. Unfortunately, the recent floods destroyed the bats roosting habitats and no one knew where the bats migrated to.

Our guide suggested visiting La Selva Biological station, where the bats could be found as well. We did just that. And for something different, we returned to La Selva for the night walk.

On our last night in Tirimbina, it started to rain about 4 am, and kept raining until 8 am. We fought the temptation to stay in our beds on a rainy morning and once it was reasonably dry we headed back to the Canopy bridge for the last bit of wildlife watching at Tirimbina.

The forest was quiet after the rain, but we remained on the bridge, watching the small stream meandering through the jungle floor below and hoping to spot a thirsty mammal coming in for a drink.

We were so intent on looking away from the bridge that I got a fright when out of the corner on my eye I saw a large shape approaching us along the top support cable of the bridge. When I turned around I could barely believe my eyes.

A female sloth with a young clinging to her belly was steadily making her way across in broad daylight. She was already no more than 3 meters away from us.

Since she looked a bit miserable, wet from the night’s rain, we decided that she was eager to get to the top of the canopy to find a sunny spot to dry out. And she was making impressive progress. Nowhere near as slow as I would imagine a sloth to move, she was weaving her way around the vertical cables of the bridge. She seemed incredibly agile.

All but ignoring us she passed right above our heads heading for the opposite end of the bridge. Once she got level with the trees growing next to the bridge she started looking for a way to climb up, but there were only thin and wobbly lianas within her reach.

We were certain she would realize the futility of her attempts and find a better spot to cross over. There was no way such an ungainly animal would make such a delicate crossing. But she proved us wrong. Without much hesitation, she grabbed the closest liana, lifted herself up and with just a couple of movements she maneuvered herself onto the tree. I was absolutely and totally impressed.

Once she made it onto the firm branches of the trees, she let her young go for a little wander – must’ve needed a rest after such an epic adventure.

Tirimbina Lodge can be reached by car – it is about a 2hr-drive north of San Jose airport.

The lodge offers the following tours: Night Walk, Bird Watching, Bat Program, Chocolate Walk, Natural History Walk, and a Self-guided Walk. The tours are conducted in English, but if you would like to practice your Spanish, this is a good opportunity to learn a few animal names.