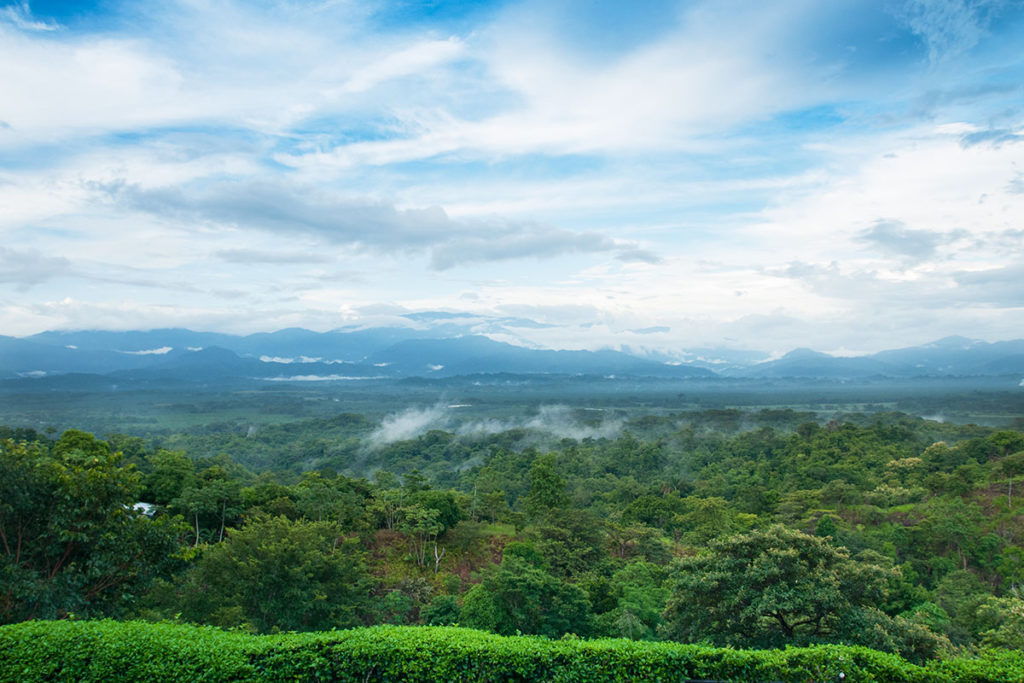 From the misty mountains of the continental divide, our Costa Rica wildlife watching itinerary took us to the sandy beaches of the Pacific Coast, where we spotted our first flock of Scarlet Macaws at the gorgeous Playa Hermosa (the one in Puntarenas Province, not in Guanacaste). The beach was indeed very handsome so we decided to stay for lunch and go for a swim.

When we pulled into the driveway of our rental house, Villa Amanecer, we thought we must’ve gotten the address wrong. It was a gorgeous two-story mansion on top of a hill with uninterrupted bird’s eye views of the tropical rainforest cloaked in mist and framed by the distant mountains. Quite a change from our little cottage in Monteverde, and easily one of the best places to stay in Costa Rica in the mid-range category.

The spectacular views were not the only surprise that our dream house turned up. As we were having dinner on the balcony, we heard some rustling noise in one of the trees growing by the side of the house. Always prepared like the best of Boy Scouts, we shined a torch on the tree and were greeted with a cheeky little face of a Kinkajou. It was feeding on mango fruits and was quite content to let us watch it for a few minutes.

In the morning Ruth, Peter and I took a wildlife watching tour to Damas Island to search for the elusive Silky Anteater. Very rare and hard to find elsewhere within its range, the tiny anteater occurs at high density in the mangroves around the island. No one knows why.   To be fair not much is known about the species at all.

Milenlli – our guide from Ave Natura quickly found the first anteater which was shortly followed by another one, much lower in the tree. Since they are a nocturnal species, most observations of Silky Anteaters during the day involve staring at a motionless ball of orange fur, coiled so tightly on itself that it is next to impossible to tell what part of the animal you are looking at.

After finding the anteaters Milenlli took us to a hollow tree that was home to a female Four-eyed Opossum and her young. Both were at home, snoozing peacefully inside their snug ‘nest’.

The majority of other wildlife sightings on the trip consisted of birds and reptiles with the only other mammals being a slightly different looking race of White-throated Capuchins.

We spent the afternoon wildlife watching in Manuel Antonio National Park. Unfortunately, like most other popular and easily accessible national parks anywhere in the world, Manuel Antonio was overcrowded and overdeveloped. It did contain an impressive array of wildlife though.

The most popular way of visiting the park is with a guide, but we chose to explore on our own. Haunted by the memories of the Kinkajou night walk in Monteverde, we ignored the countless groups of tourists clustered around their guides and staring intently into the canopy through a scope. No doubt a fair share of these sightings was crickets, spiders and iguanas, although a few had a sloth or an interesting bird in their sights.

We managed to find a Three-toed sloth on our own as well as a few Crab-eating raccoons on the beach and a troop of Squirrel monkeys on the way out of the park. The sloth was particularly special, so far we’ve only seen Hoffman’s two-toed sloths. Raccoons, on the other hand, are one of the most menacing species of Manuel Antonio wildlife. They congregate around Manuel Antonio Beach and can get quite aggressive when they are intent on getting food scraps from the beachgoers.

Back at the house, we had a few frogs – a Masked tree frog and an aptly named very nondescript Drab tree frog. We kept an eye out on the mango tree and even put some ripe mangos on the edge of the balcony, but the Kinkajou did not come out to play.

All in all, Manuel Antonio was a little disappointing in terms of wildlife watching experience. While the trip to Damas Island was a fantastic day in a gorgeous natural setting, the main National Park or at least the part of it open to the tourists felt more like a zoo. But between our mansion, Damas Island trip and a Kinkajour in our garden, we had a great time in Quepos.