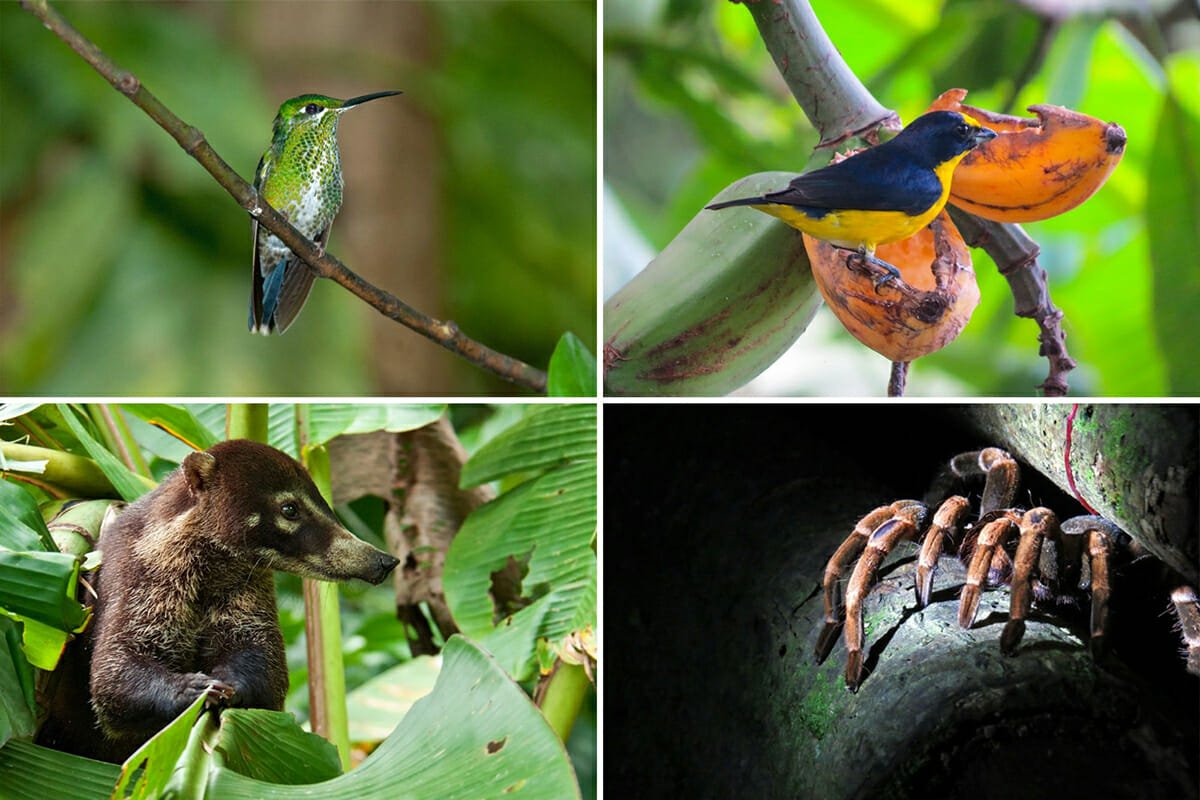 Before you plan a trip to Monteverde, check out our guide to Monteverde Cloud Forest animals and where to see them.

Monteverde Cloud Forest Reserve is a magical forest of thick, lush green vegetation shrouded in mist. The forest is so thick you almost never see the ground. Everywhere, the tree trunks are covered with vines snaking their way up towards the sun. And shaggy mossy tendrils of old man’s beard hang off the branches.

This lush vegetation hides an extraordinary diversity of wildlife. Monteverde Cloud Forest Reserve is a great place to see some of Costa Rica’s rainforest animals, from the country’s most famous bird – Resplendent quetzal to sloths and porcupines to frogs, vipers and bird-eating spiders.

One thing to keep in mind when planning a trip to Monteverde is that while most of Costa Rica enjoys a balmy tropical climate, Monteverde is located at the top of Costa Rica’s Continental Divide at 1,500 meters of elevation, and it gets quite cold, especially in the evenings.

A cloud forest is a fascinating, almost mystical environment. So here are some facts about these misty forests.

What is a cloud forest?

A cloud forest is a tropical or subtropical evergreen montane forest characterized by canopy-level cloud cover and, consequently, low levels of sunlight. Without sufficient sunlight, moisture from the clouds gets trapped by the vegetation and condenses into fog.

Cloud forests are characterized by shorter trees with gnarled trunks and branches and by the abundance of mosses covering almost every surface. These mist-shrouded mossy forests represent only 1% of the global forest cover.

Where can you find a cloud forest?

Apart from Monteverde Cloud Forest Reserve, you can see cloud forests at the top of Poas Volcano and in various pockets along the top of Costa Rica’s Dividing Range (a mountain range running through the middle of Costa Rica).

Cloud forest is not restricted to Costa Rica, of course. You can find it in many countries, including Mt Kinabalu in Borneo, Fiordland National Park in New Zealand, and Doi Inthanon in Thailand.

What is the difference between a cloud forest and a rainforest?

The main difference between a rainforest and a cloud forest is that the former forms at a low elevation and the latter at a higher elevation above sea level. Consequently, rainforests tend to be warmer than cloud forests.

In terms of appearance, the rainforests are dominated by taller trees with straight trunks, while the trees in the cloud forests tend to be shorter and have gnarled and twisted trunks and branches.
Cloud forests are much more humid environments, characterized by persistent fog, thick moss hanging off tree branches and an extraordinary abundance of epiphytes, like orchids and bromeliads.

The misty environs of Monteverde Cloud Forest Reserve are home to an astonishing diversity of plants and animals, about 2.5 per cent of the world’s biodiversity, to be precise. There are approximately 3,000 different plant species, over 100 mammal species, 400 species of birds and 161 species of amphibians and reptiles.

More than half of Monteverde cloud forest mammals are made up of bats. There are at least 58 different species of bats here.  All five species of Costa Rica’s wild cats occur in Monteverde: ocelot, margay, oncilla, puma, jaguar and jaguarundi, as well as three species of primates, over 15 species of long-tailed rats and mice, tapir, peccaries, coatis, rabbits and squirrels to name a few.

Of course, in a forest as thick as Monteverde Cloud Forest, animals are not easy to spot. They have plenty of cover to keep out of site. A good way to see wildlife is by joining a spotlighting walk at night (more on this later) for mammals and reptiles and a birdwatching tour during the day.

Hummingbird Gallery is a small courtyard of the Wildlife Photography Gallery & Souvenir Shop surrounded by the forest. It is easy to find right next to the entrance of Monteverde Cloud Forest Biological Preserve.

The gallery is filled with hanging nectar feeders that attract dozens upon dozens of hummingbirds.

Another critter who likes the nectar is the olingo. But to see the olingo, you’ll need to visit at night.

We visited the Hummingbird Gallery late in the afternoon, and olingo didn’t show. The hummingbirds, however, were out in force. Being there in that tiny garden surrounded by dozens upon dozens of tiny brilliantly coloured birds that beat their wings too fast for a human eye to see was absolutely awe-inspiring.

There are 14 different species of hummingbirds that visit the gallery, although we were only able to identify half a dozen of them. We saw: Violet saberwing, Green-crowned brilliant, Stripe-tailed hummingbird, Coppery-headed emerald, Purple-throated mountain gem, Steely-vented hummingbird, Green violet-ear and a few Bananaquits.

If you really enjoy your birds, it’s a good idea to join a birdwatching tour in Monteverde. The birds that inhabit this forest are spectacularly colorful.

Monteverde wildlife on a Night walk

The night is when it all happens in Monteverde. So if you want to see some of Monteverde Cloud Reserve animals, you’ll need to join a night tour. Better else, if you can, join the Day and Night Tour and have the best of both worlds – birds in the daytime and mammals at night.

If you only have time for the night tour (they usually run for 2 hours), this Monteverde Night Hike tour is a good option. It takes you to a private reserve away from the crowded trails.

You’d be very unlucky not to see Two-toed sloths and Mexican hairy dwarf porcupines on your night walk.

The dwarf porcupine, however, is a very curious creature. Unlike Asia’s porcupines which are rather clumsy and live on the ground, the Mexican porcupine is an agile climber with a prehensile tail. Also, unlike the impressive quills of terrestrial porcupines, the spines of the Mexican porcupine are short and only visible on its head. The rest of the spines are covered with long black fur on its body.

But it’s not all about the mammals, of course. The night tour is also a good opportunity to see snakes, like the beautiful eyelash viper, frogs, and even the tarantulas also known as bird-eating spiders. These giant arachnids are one of the more memorable animals in Monteverde.

If you just want to soak in the ambience of the cloud forest without the large tour groups, consider visiting the nearby Santa Elena Cloud Forest Reserve. It is much less crowded than Monteverde.

There is a network of walking trails in Santa Elena that take you to different areas of the park. To get the most out of this special forest, pick one of the trails that pass the watch tower with a fantastic view of the Arenal volcano (on a clear day). A visit to Arenal Volcano is one of the most popular things to do in La Fortuna, but if you are not going there, these trails are your chance to see the volcano from a distance.

For a longer walk, consider Sendero del Bajo and Sendero Encantado – an easy 4.7-km loop trail through the cloud forest where you can spot some of Costa Rica’s rainforest animals. Keep an eye out for the quetzal toucanets. You might also see some white-faced monkeys or howler monkeys. Even if you don’t see them, you should hear the howlers at some point.

For a shorter walk, you can take Sendero Youth Challenge. It’s only a 1.6km loop, and it passes the watch tower as well.

How to get to Monteverde

To visit the park independently and allow yourself more time for exploration, it is best to rent a car. It is an easy 3hr drive from San Jose via Route 27 or a 2.5hr drive from Liberia via Route 1.

There is also a public bus service from San Jose to Santa Elena town that departs twice a day (6.30 am and 2.30 pm). From Santa Elena, you can take a taxi to the reserve.

Where to stay in Monteverde

There are a number of lodges and resorts on the road leading to Monteverde. If you are looking to wrap yourself in comfort, consider Koora Hotel-a Cloud Forest Resort or Hotel Belmar. And for a touch of glamour in the jungle, there is Chira Glamping.

In mid-range, Monteverde House and the gorgeous Hospedaje Mariposa are both popular options.

Or you can stay within the reserve at Monteverde’s own La Casona lodge if you don’t mind simple lodgings.