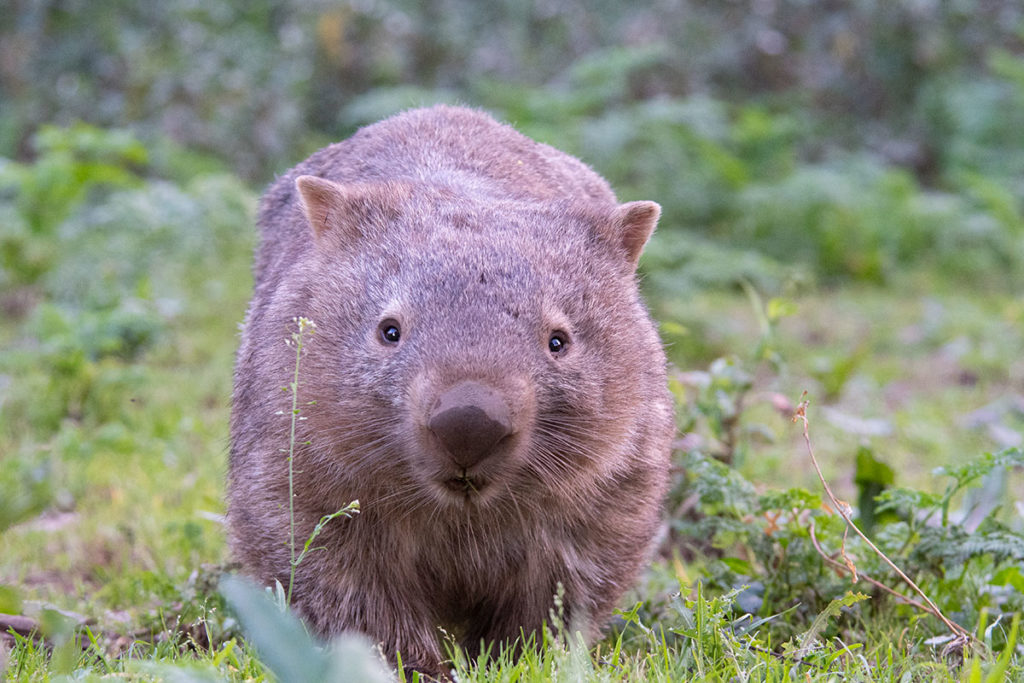 Wombats are some of the most iconic and adorable native Australian animals. But these barrel-shaped furry teddy bears can be quite elusive, especially around Sydney. Of course, you can see wombats in various wildlife parks in and around the city, but what is the best place to see wombats in the wild near Sydney? The answer is – Kangaroo Valley in the Southern Highlands. This beautiful valley, about a 2.5hrs drive from Sydney, is where you are virtually guaranteed to see wild wombats and kangaroos.

We met Dave, our guide from Perfect Day Sydney, at 8.30 am and as we loaded into his minivan he gave us the lowdown on what to expect: South Coast, Southern Highlands, Kangaroo Valley, rainforest walk, a blowhole, two waterfalls and a BBQ dinner in the company of wild Kangaroo Valley wombats and kangaroos. A 12-hour adventure packed with a dizzying variety of landmarks and locations.

A glimpse at the day ahead

So without further ado, we got our show on the road. It was a long but scenic drive past Royal National Park to our first scenic stop at the Sublime Point Lookout. Our welcome to the South Coast was a sweeping view over the coastal city of Wollongong and the ridiculous number of sandy beaches along this stretch of the coastline.

The next stop was the famous Kiama blowhole. This 260-million-year-old volcanic formation is at its best when the swells are particularly high and up to 50 litres of water can shoot up 25 meters in the air thoroughly drenching the brave bystanders.

But even on a beautifully calm spring day, the blowhole is a fascinating feature to watch. And listen. The sound of the water exploding from the chamber of the blowhole is a lot louder than you would expect. It is, in fact, this sound that sets up the expectation. You keep waiting for a bigger explosion of water reluctant to turn away from the blowhole in case you miss a particularly voluminous spray.

The signage at the blowhole viewing platform explains what happens below the blowhole. The blowhole was created by the weathering of the softer rock into a tunnel underneath the headland. And as each surging wave fills the tunnel a tremendous amount of pressure is created. Then as the wave retreats, the pressure is released, forcing the trapped water through the blowhole with a thundering “whoomp”.

Kiama blowhole also happens to be the largest blowhole in the world. And as with all biggest, tallest and oldest things, it attracts large numbers of tourists to an otherwise chilled coastal town of Kiama. In the pre-covid world, 900,000 tourists a year visited the blowhole.

And, of course, there is blowhole-themed merchandise in town. We happily munched on the wonderfully delicious Blowhole pies for lunch, enjoying the sunshine in the company of an Australian pelican camped up on top of a nearby street light.

From the glorious sunshine of the coast, we headed to the humid cool of the Minnamurra rainforest in Budderoo National Park. Minnamurra Rainforest Centre protects the rare remnant rainforest that once reached throughout the Illawarra.

Today, Minnamurra Rainforest is a popular weekend destination and when we arrived, about a dozen cars were queued up at the entrance gate. This could have taken a while, but one of the benefits of being part of a tour is queue skipping. Dave introduced himself to the park ranger and was given the green light to head to his reserved parking spot. I couldn’t help feeling a little smug as we drove past the queueing cars and through the park’s gate.

Walking the trails through this wonderful forest is a feast for the senses. The first thing you notice is that it is considerably cooler here than on the coast and that the air is thick with the scent of a humid forest. Then you start hearing the gurgling sound of dozens of little waterfalls and the soft chirping of the birds.

We took the Minnamurra Loop Walk and as we meandered along the elevated boardwalk and across suspension bridges we discovered a primeval world of strangler figs, giant bird’s nest ferns and shaded streams making their way in between moss-covered boulders.

Here and there, monumental tree trunks were lying by the side of the trail, as painful reminders of the region’s logging past. Dave offered some sobering facts – this area was the biggest supplier of timber for Sydney between the 1920s and 1970s. It was logged so extensively, that this small patch of rainforest is almost all that’s left of the once expansive ancient forests.

Our next destination was Belmore Falls in Morton National Park in the Southern Highlands. But the road that Dave intended to take was closed and we had to take an incredibly scenic detour via Macquarie Pass that twists and turns as it climbs to the top of the Illawarra escarpment through Macquarie Pass National Park.

This very steep, 8-km road with its many hairpin bends is one of the most famous roads in NSW. It is incredibly scenic, especially once you start getting glimpses through the canopy of the sheer wall of the escarpment that you are ascending.

As we drove along, Dave continued sharing some cool facts about the area. The Southern Highlands is part of the Australian Great Dividing Range – a mountain chain that runs for 3,700 km from the Cape York Peninsula in Queensland to the Grampians in Victoria. It is the fifth-longest land-based mountain range in the world, (after the Andes, Africa’s Great Escarpment, Rocky Mountains, and Antarctica’s Transantarctic Mountains). I have visited various parts of the range (like the Blue Mountains and Watagan Mountains near Sydney) but didn’t realize that it ran literally across the entire continent.

By the time we arrived at Hindmarsh Lookout in Morton National Park we were 500 meters above sea level. From this height, the Upper Kangaroo Valley looked like a lush green carpet framed by the sandstone walls of the Illawarra Escarpment. We would end our Perfect Day down in the valley with the much-anticipated walk with Kangaroo Valley wombats, but before that, we had a couple of epic Kangaroo Valley waterfalls to check out.

First up was Belmore Falls, a large plunge waterfall fed by the Barrengarry Creek. From a nearby lookout, we could see two drops of the falls as the creek plummeted down the exposed cliff face to a little pool below and then ran over the cliff again to be lost out of view in the thick forest below. Amazingly, as beautiful as the falls are, the lookouts were virtually deserted.

There was a single family perched on a rock at the falls lookout when we arrived and they looked like they’d been relaxing there for quite some time. There was enough space for all of us at the lookout, and after a few minutes of watching the falls, we left the family to their solitude.

We took a trail that ran along the edge of the escarpment and five minutes later arrived at another lookout a little closer to the falls. Yet still, we were not done with Belmore Falls. We drove to the top of the falls and across Barrengarry creek just a few meters from the point where it plummets over the lip of the cliff.

Luckily, there was a space in a small parking bay on the side of the road, so Dave was able to park the van and we went for a walk to the very top of the falls. From here, the flow seemed much more substantial and the pool at the bottom of the first drop of the falls wasn’t all that small. The second drop on the other hand was almost invisible from this angle. It looked like a small cascade if anything. It was fascinating to check out Belmore Falls from so many different perspectives.

Another 20-minute drive transported us from the tranquil setting of Belmore Falls to the buzzing atmosphere of Fitzroy Falls also in Morton National Park. The two settings couldn’t have been more different. Where the walk to Belmore Falls was a forest path, at Fitzroy Falls it was a major thoroughfare with a steady flow of visitors.

The lookout at Fitzroy Falls sits at the top of the 81-meter-high waterfall and you essentially look down at the wall of water gashing off the top of the escarpment. It would have been interesting to hike to the bottom of this waterfall for a different view, but we obviously didn’t have the time or the energy, by this point.

This concluded the scenic experiences of our epic Sydney day tour and it was time to continue our tour in Kangaroo Valley and to find some wombats.

And wombats we found! Dave drove us to a grassy lakeshore clearing and when we arrived three wombats were already out and about. As nocturnal marsupials wombats emerge from their burrows at dusk to spend the night feeding on grasses, herbs and roots. But some individuals are obviously more hungry than others – they were busily munching on grass in broad daylight.

While Dave was busy cooking our dinner, the six of us set out in search of close encounters with wombats. The animals around us were incredibly tame. Although there were still a few people around and eventually the three maverick wombats decided that they had enough attention and retreated to areas of thicker undergrowth.

By then, of course, our own dinner was ready and we didn’t need to be invited to the table twice. After such a long and eventful day outdoors we were as hungry as the wombats. And I could’ve sworn that Dave’s grilled burgers were the most delicious burgers I’ve ever had. Winding down from a day of adventure we lounged in our camping chairs in the warmth of the late afternoon sun, sipping wine and waiting for the rest of the wombats to emerge from their slumber.

Once we finally peeled ourselves off our comfy chairs and walked to the next clearing, the wombats were literally everywhere, chewing grass with single-minded determination. And as Dave predicted, they seemed to respect each other’s personal space and wandered a few meters away from one another.

We walked among them as the sun was moving lower in the sky, and after a while, Eastern grey kangaroos emerged from the thickets to browse next to the wombats. Above them, cockatoos and kookaburras called from the treetops. You could hardly imagine a more typically Australian landscape.

It was already dark by the time we walked back to the van happily fatigued from our epic Sydney day tour. The drive out of the valley was slow going at first. A wombat wandered onto the road, then another one, then a Swamp wallaby that couldn’t decide which way it wanted to hop off the road.

It is surprising how difficult it is to see the animals on the road. A grey blob low to the ground doesn’t stand out in your lights until you are almost on top of it. Which is why one of the first rules about driving in Australia is to drive slowly in areas where wildlife can easily wander onto the road.

So, what is the overall verdict? The Kangaroo Valley tour gives you absolutely the best chance to see wombats near Sydney! And with so many sights and experiences packed into one day and with such close encounters with wombats and kangaroos, Walking with Wombats Experience is the perfect Sydney day tour for anyone who enjoys nature and wildlife.

Intrigued? Check the availability below

4 thoughts on “Walking with wombats in Kangaroo Valley – Tour Review”