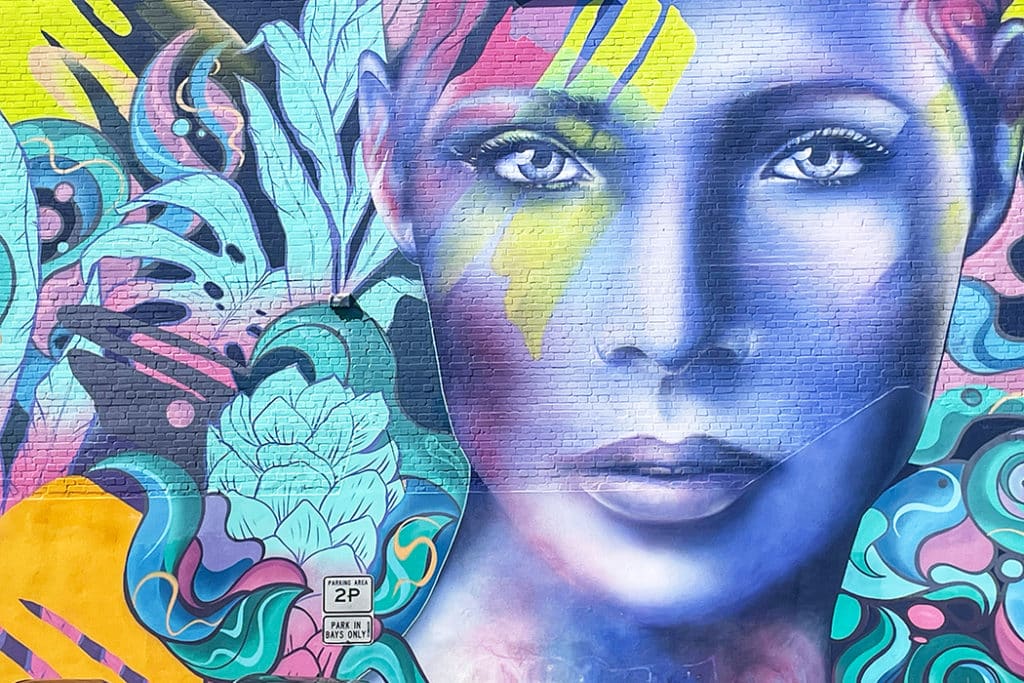 Ever wondered how to be a tourist in your own city? I sure have, especially in the last couple of years, but my romantic notions of getting lost in unfamiliar neighbourhoods always seemed to fall flat in reality. What was missing was that feeling of total immersion that travel to exotic faraway places brings.

I almost gave up on the idea until I had the opportunity to join a guided tour in my own neighbourhood. And that’s the secret: if you want to experience your city from a tourist’s perspective, to explore the hidden nooks and crannies beyond the familiar streets, and to acquire a wealth of local knowledge in a short period of time – join a guided tour. And if you consider yourself a foodie, a local Sydney food tour is the way to do it.

The 3-hour tour I took – Newtown Chewtown – Food & Street Art is offered by Sydney’s Local Sauce Tours and explores the popular eateries and street art scene in Newtown. I lived in Newtown during my undergrad years, and I thought I knew the neighbourhood reasonably well. Yet I was flabbergasted to discover Newtown’s connection to one of my favourite classical novels, Charles Dickens’s Great Expectations, or to the early days of Australia’s most famous rock band – AC/DC.

So whether you are a Sydney-based foodie or visiting the city for the first time, a guided food tour in Sydney is a fun way to road test a few good restaurants, explore vibrant neighbourhoods and learn the kind of stories you won’t find in the guidebooks. Here’s what to expect from the Newtown Chewtown tour with Local Sauce Tours.

Disclaimer: I participated in the tour free of charge, courtesy of Local Sauce Tours, but the views expressed in this review are my own, reflecting my honest opinion of the experience.

We met Justin, our host and guide for the afternoon, just outside Newtown train station. Our group was a mix of ages and backgrounds but with Justin’s effortless humour we ran a round of self-introductions and once we were acquainted we headed towards our first restaurant – a local favourite just off King Street.

On the way, we passed an unusual display in a Thai restaurant window of larger-than-life sculptures made from scrap metal and featuring characters from the Alien and Transformers movies. While we gawked at 2-3 meter tall alien invaders, Justin pointed out that the space above the restaurant used to be a recording studio where AC/DC had their jam sessions in the early days of the band.

Continuing on our way, we came across one of the largest, if not the largest, murals in Newtown (see image above the post). Painted by three different artists, Live Outside is one of the most striking murals in the neighbourhood, in my opinion, but since it’s tucked away in the backstreets, you can easily miss it if you stick to the main streets.

The first restaurant of the tour was the Rising Sun Workshop – an unusual combination of a motorcycle workshop on the ground floor and an award-winning Ramen bar upstairs. The unique atmosphere of community and authenticity at Rising Sun makes you feel like you are visiting your Japanese aunt’s place for lunch, somewhere in the back streets of Tokyo.

The trademark dish here is the breakfast ramen that comes with buttered-toast broth, bacon, egg and tomato. But since we were visiting in the afternoon, we sampled the delicious Ramen Scotch eggs and mixed Tsukemono pickles, washing them down with Orange wine and Pet Nat from the extensive wine & cocktail list.

After the Orient fusion, our next culinary destination was Australia. While opinions on what exactly constitutes Australian cuisine might vary, most Australians are quite fond of pies. And pies we found at the cosy Pie Tin. Decorated in industrial-warehouse style with stylishly-barred windows, the place reminded me of a boutique jail cell. Perhaps an intentional throwback to Australian convict history.

On the menu is a selection of home-style handmade pies with flavours ranging from classic Bangers & Mash and Sunday Roast Lamb to the more unusual Mexican Bean and Jerusalem Artichoke.

To walk off the calories from all the delicious food we consumed in the last hour, we took a Street Art stroll and meandered past some of the best-known murals in Newtown. And while I have seen some of the art before, Justin’s stories about the murals and the artists made me see them in an entirely new way. I won’t tell you the stories not to ruin the surprise, but I will mention one because it’s been haunting me ever since the tour.

This sad story relates to the large mural by Ox King titled The Promise. The painting is of Eliza Emily Donnithome – a 19th-century bride set to marry her Prince Charming at a big gala wedding at St Stephen’s Church. But the groom never showed.

Heart-broken Eliza became a recluse and spent the rest of her life in her house waiting for the arrival of her beloved, with the wedding feast still spread on the table and slowly turning to dust. She wore her wedding dress until the day she died in 1886. Today, you can find her grave at Camperdown cemetery.

Eliza’s sad story made international headlines and inspired Miss Havisham’s character in Charles Dickens’ novel Great Expectations. I walked past this particular mural many times in the past, and always thought it was a beautiful painting. But it’s the story of Eliza that makes it meaningful. And Justin’s tour is all about such stories of real people behind Newtown’s iconic street art and popular establishments. And these stories turn bricks and stones into the living fabric of the neighbourhood.

The walk wasn’t only about street art of course. Justin’s every other story started with: here’s the best pizza (or lamington/cake/Egyptian street food) place in Newtown. By the end of our short stroll, I amassed a mile-long list of shops and restaurants to check out on my next visit to Newtown.

Our dessert stop was one of the best surprises of the tour – the Turkish ice cream shop, Hakiki on Enmore Road. I’ve never heard of Turkish ice cream, and let me tell you, it’s like nothing you’ve ever tasted before. Thick, flavoursome, and creamy, it melts in your mouth but not in your cone, thanks to the secret ingredient of salep – the dried, powdered root of an orchid that grows in Southern Turkey. The proprietors, Nev and Zeynep Bagriyanik hail from the Turkish Ice Cream city of Maras, as do their ice cream recipes.

One of the most popular ice cream flavours at Hakiki is Melon Feta. Sounds unusual? Trust me, it works. And if you are not into ice cream, there are also various types of Baklava and Turkish Delights on offer, as well as Turkish coffee and tea.

Hakiki is a popular and buzzing place, and that’s another perk of being on Justin’s tour – you always get a table as well as a suggestion on the best options on the menu.

We finished the tour at Young Henry’s Craft Brewery and Tasting Bar – a vibrant and offbeat place where dogs are welcome as long as their humans have shoes on. While we sampled some pale ale and cider, Justin shared the last surprise of the tour – Newtown Chewtown Bingo card – a list of 25 uniquely Newtown experiences to sample and cross off the list.

To my surprise, I could tick less than a third, after living in Newtown for over 3 years. And that’s the point of the tour, no matter how well you think you know a place, there is always more to discover.

If you are keen to test your knowledge of Newtown, or simply want to spend an afternoon tasting scrumptious food, exploring street art and making new friends, check out Local Sauce Tours’ Newtown Chewtown Food and Street Art Tour.

Sounds fun, but not ready to book? Pin this post for later