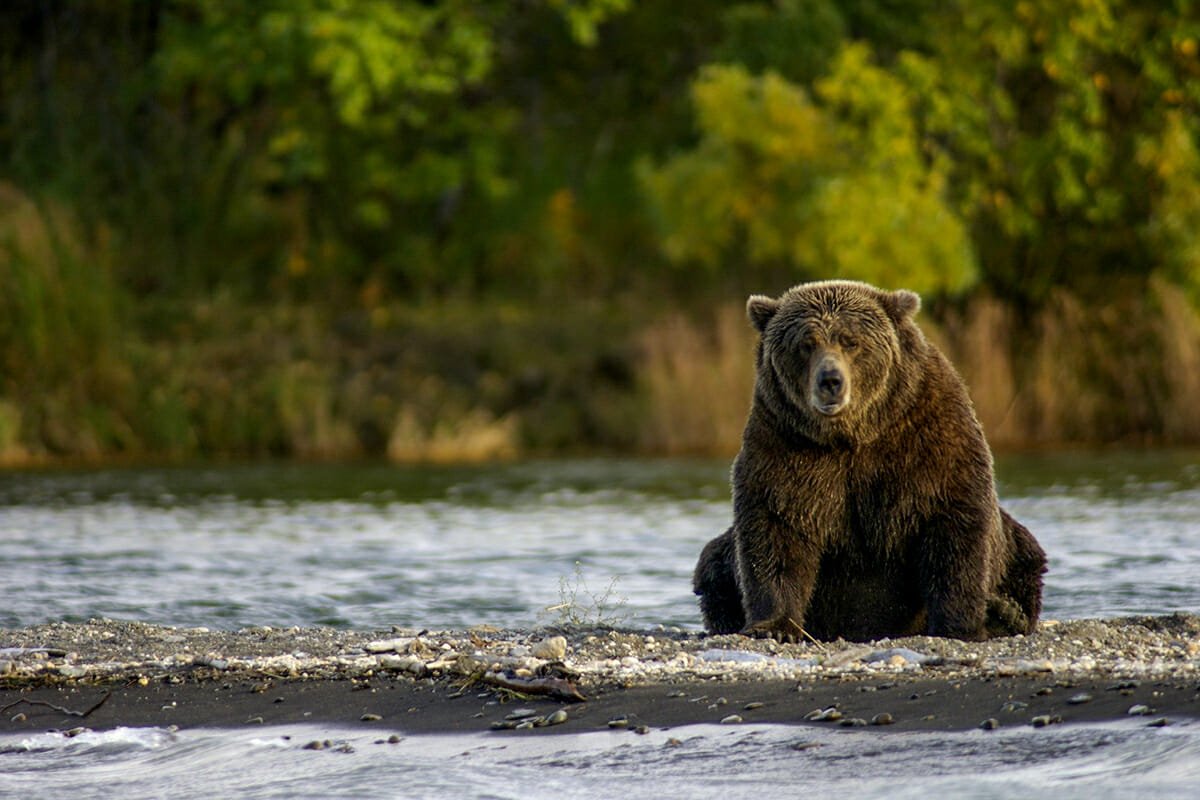 Want to go bear viewing in Alaska and see them salmon fish in the wild? Then read on to find out what it’s like to watch and photograph bears in Katmai National Park. Katmai is located in the remote corner of Southwest Alaska, approximately 1.5 hours via plane from Homer. And it is home to the largest population of protected brown bears in North America and is the best place to go bear watching in Alaska, and possibly the world.

Curious? This Brown Bear Tour to Katmai and Denali National Parks will let you see more bears than you ever dreamt of, not to mention the plethora of other Alaskan wildlife.

In planning our trip to Katmai, we found the best way to access Katmai is via plane from Homer given it is too far for a day trip from Anchorage. After reading many reviews and speaking with the owner, I made our reservations to go bear watching at Katmai through Steller Air Service in Homer.

Andrei was very helpful and made the reservation process very easy. We opted for the 8 am flight to Katmai as it was July 4th and were returning to Homer for their annual July 4th parade in the evening. The downside to going early is the crowds. In speaking with Andrei after the trip, he wished we had gone on the 3 pm tour but since we were in the parade, 8 am was our best option.

We ordered lunches from Sourdough Express for the flight back. Kevin was kind enough to deliver our lunches since we were without a car in Homer.

The best part of Katmai bear viewing is watching the bears fish for salmon. If you want to see this special event, the best time to visit Katmai National Park is between the end of June and July. We were there over July 4th and the salmon would be jumping!

The flight to Katmai was about 90 minutes from lift-off to touch down. This was my first time flying in a seaplane and the take-off was different and exhilarating – bumpier than I had imagined! We had a packed plane as there were 5 of us plus the pilot – be prepared for tight quarters and may not be for those with a fear of heights or a touch of claustrophobia.

Andrei was a great pilot and tour guide for the flight to Katmai. We saw mountains, glaciers and many other sights along the way. Seeing Alaska from the air offered a different perspective and should be on anyone’s bucket list for a trip to Alaska.

After being in the air for about 90 minutes, it was time to land at Katmai National Park. We could see the seaplanes lined up along the coast with visitors who had beaten us there.

Andrei deplaned first and just as the first person in our group stepped out of the plane, he stopped us. Bear on the beach! “Are you kidding me?” We just landed and already our first bear spotting. I thought it would be fun to count the number of bears we saw but I would soon realize it was quite impossible to track them throughout our visit.

Our first bear finally made his way down the beach and after deplaning, our first stop would be the National Park Visitor Center for bear etiquette training which is required for all visitors.

The Visitor Center is a short walk from the beach. Upon your arrival to Katmai, you stop at the Visitor Center for the Ranger-led bear etiquette video and talk. You learn how to act if you approach a brown bear on the trail among other things. While it is quite hard to behave the required way, it is imperative you follow their instructions as you will likely encounter a bear on the trail at some point during your visit.

READ MORE: 23 Stunning Canyons in the US to Add to Your Bucket List

As we started walking through the park, we were a little anxious about encountering a bear. When we flew into the park, we thought we saw a couple of bears on the beach. As we crossed the bridge, we realize this beach is just on the other side. (BTW, you aren’t allowed to stop on the bridge and the Rangers will yell at you if you make this mistake as we saw them yell at some visitors after we crossed).

We headed for the beach and there were two bears down the beach a little way. Too far for them to really see us, but as we were instructed we slowly backed away and continued our way toward Brooks Falls.

As we worked our way away from the beach, we started down the main trail to Brooks Falls. What do we see but another bear walking directly toward us! Since he/she was still a little further from us, we were able to walk slowly toward the gated area of the Lower River Platform.

We waited near the gate as the brown bear walked right by us headed toward the beach area we just left. All our instincts told us to turn around and run away. It was very difficult going against those instincts and following the exact instructions of the Rangers.

After the bear passed us, we continued our way to Brooks Falls. We heard there could be a wait for the platform, so making it there as quickly as possible was our goal.

We made the right turn to make the final walk to Brooks Falls and there was the biggest brown bear I’ve ever seen in the wild, in pictures or on TV. He walked slowly across the path about 30 yards ahead of us. We stopped in our tracks and waited for him to make his way through the forest.

Finally arriving at Brooks Falls, you place your name on the waitlist. It was approximately a 45-minute wait before we could enter the Brooks Falls platform area. The maximum number of people allowed on the platform at any given time is 40, so if you visit during the salmon run, you will most likely have to wait for your turn. Again, taking the 3 pm flight out could be an option to avoiding some of the crowds.

While you wait, you can watch the falls about 100 yards downstream at the Riffles Platform. We watched from this location and felt it was a great view. We saw the giant bear from the trail and soon started calling him the King of the river. It appeared he fished where he wanted, and all the other bears moved away from him.

Our buzzer finally goes off and it is our turn to go bear watching on Brooks Falls Platform. We enter the platform and become mesmerized by the bears in the falls, waiting on the perfect salmon jump. The good thing about limiting the number of people on the platform is that it is easy to see the bears– even for short people like myself.

I’m also amazed at the number of salmons jumping. You can see them jumping to get past the falls!

The bears wait in the falls, watching the salmon jump in front of their eyes. You can see them watch, and watch, and then grab the one they know they can catch. They hold it in their mouth as they make their way over to a good eating spot. I was surprised to learn they do not eat the entire fish. They eat the main meat and leave everything else for the birds. The birds anxiously await the leftovers!

Big ones, little ones and in-between are all great fishers. They spread out in the falls to not intrude on each other’s fishing areas. We didn’t see any wrestling or fights; all the bears were pleasant to each other as there was plenty of fish for all of them.

There is a National Park Ranger on the platform available for any questions. He also keeps track of how long people have been out there and will call you to leave if you overstay your time. Each person is allowed one hour on the Falls Platform.

Our 60-minutes on the platform were coming to an end. Instead of taking pictures, we took the last 10 to 15 minutes to soak in the experience. Katmai bear viewing is an experience I will never forget.

Before departing the park, we went to the visitor center for passport stamping, postcards and a few other souvenirs to document our visit.

Nancy Williams is the creative mind behind the Checking It Off the List blog. Follow Nancy’s adventures on her blog or connect with her on Facebook.