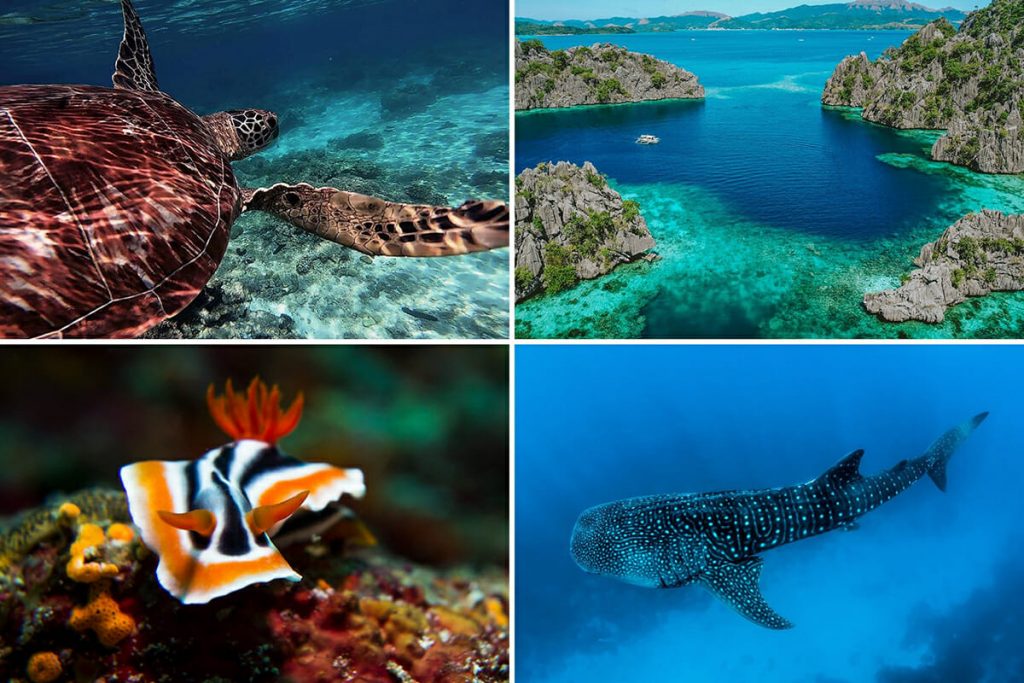 The Philippines is a developing nation and a paradise for nature lovers. This tropical slice of heaven is famous for its wide selection of stunning beaches, hidden lagoons and other breathtaking natural landmarks. If you are looking for adventure, and brave enough to explore the more remote parts of this planet, then a trip to the Philippines could be a perfect choice.

While the country is especially renowned for its land-based wildlife and isn’t by any means among the top safari destinations in the world, it does offer a relatively wide diversity of birds and small mammals. The real highlight, however, is diving in the Philippines. The marine underworld around the Philippines is considered to be the most diverse and rich in the entire world.

Now is the best time to visit the Philippines, as its popularity is growing every day. Before long, the country will be full of tourists just like Thailand, Vietnam or Bali and that elusive feeling of exploration will be long gone.

This guide covers everything there is to know about diving in the Philippines, with the focus on exploring the spectacular marine life. Even if you have never dived before you can still enjoy this wonderful place – and maybe even get certified while there if you have the time. Nonetheless, below you can find recommendations not just for diving, but for anyone who is into a fun-filled vacation focused around nature and adventure.

More about the Philippines

The Philippines is an archipelago nation consisting of over 7000 islands, 25% of which are inhabited. This offers visitors the perfect mix, as each island has its own style and vibe. While most islands are undeveloped and secluded, some of the more beautiful ones have already grown into full-scale tourist magnets.

The best time to visit the country is between October and May, with the summer beginning around March. Try avoiding the months of June through September as you might encounter heavy monsoon rains and tropical storms. Visiting on the rainy season does make the vacation much cheaper though, and it doesn’t really disrupt the visibility while diving.

Due to the long travel times, people usually devote at least 2 weeks to the Philippines. This should allow you to comfortably visit 3 or 4 islands. Keep in mind that transfers between the islands are quite a hassle at times, as delays and even cancellations are quite common. Try to avoid multiple transfers on the same day, and allocate a whole day to completing these.

Tubbataha Reef is a UNESCO world heritage site that offers the finest diving in the Philippines and quite possibly, the world. This is thanks to an extremely large and diverse selection of both marine and coral species – spreading over a huge area of more than 100,000 hectares in size.

The national park consists of 2 atolls and one reef, and lies at the heart of the coral triangle – an area which holds about 70% of the world’s corals! Diving conditions in this area are fantastic, with good visibility at depths of up to 45 meters. These give visitors a unique chance not only to see countless corals and fish but also dolphins, whales, sharks and sea turtles who all frequent this place.

Due to the nature of the place, snorkelling is not really possible and the only way to explore the park is by diving. This marine sanctuary is located far in the ocean and so access to it is only available through liveaboard diving trips. This means that visiting Tubbataha Reef is more suitable for experienced divers – with a required certification level of advanced open water at the very least.

The safari takes either 6 or 7 days to complete and includes between 4 and 5 dives each day. On some days, you’ll also enjoy a night dive. The boats size ranges but they can usually accommodate up to 12 guests, not including the staff. There are budget boats with pretty basic accommodation, but there are also luxury liveaboards which are nicer and offer a more of an all-inclusive twist to the experience.

The boats all leave from Puerto Princesa, The capital city of the Palawan province. It’ll take you half a day to reach the reef itself, and once there you will immediately start diving. So, it might be wise to arrive at Puerto Princesa a day or two earlier and visit the Underground river – another UNESCO heritage site, which has been voted as one of the ‘new 7 wonders of nature’!

You can even book a combined Palawan package, which can also include other fantastic locations such as El Nido and Coron. Even if your focus is solely on diving, it will be a shame not to spend a few days on the island itself and explore everything it has to offer. After all, it was voted as the best island in the world by Travel & Leisure magazine for a good reason.

If visiting Tubbataha isn’t enough to satisfy your craving for world-class diving, then there are other options that compliment that experience very well. While quite similar in nature, they have slight differences which help distinguish between each of them and turn each safari into a unique, one of a kind experience.

Apo Reef is like Tubbataha in many senses – it is also a UNESCO site, a natural park, and requires liveaboard and advanced diving skills. The difference there is mainly with what is on offer – Apo Reef has one of the largest coral reef systems in the world. Access to the site is much more limited and is usually done as part of a conservation mission. This could be a fantastic opportunity for you to explore one of the earth’s most special places while helping to make it cleaner and better.

If you wish to do a diving safari without actually living on a boat for a week or more, then the Visayas would be the best choice for you. This region is one of the largest in the Philippines, but the diving safari focuses mainly on the islands of Cebu and Bohol. You’ll travel by van and sleep at guesthouses or bed&breakfast type accommodation along the way, as you prepare for diving each day in a brand new location.

Cebu island is huge, and among its smaller towns you can find Moalboal and Malapascua – both are pristine diving destinations. The first offers the richest marine biodiversity in the world, while the latter gives you a guaranteed chance of encountering thresher sharks. While on a diving adventure in Bohol, you can explore  Balicasasag Marine Sanctuary and Pamilican Island for a chance to dive with sea turtles, dolphins and whale sharks.

Other islands for diving

The Philippines is a huge country with many different islands you could explore. Even if diving in the Philippines isn’t your primary focus on this vacation, it would still be a shame to not try it even once. After all, this place is considered among the best in the world. Even without any prior experience, there are plenty of islands where you can book a ‘discover scuba’ class which will introduce you to this amazing world.

Palawan is one of the most popular destinations in the Philippines. There are dozens of tourist spots in Palawan, but for a diving safari, make sure to add El Nido and Coron to your Philippines itinerary. El Nido is by far the more famous out of these two islands, known for its breathtaking lagoons and pristine beaches. It is the ultimate destination for couples who seek a romantic retreat. The town is quite developed and good hotels are very easy to find. This is also the case when it comes to dive shops which are extremely professional and well equipped. There are, however, a few things you need to know about El Nido to be prepared for your visit.

While diving in El Nido, the focus would be primarily on coral reefs. You could first explore the lagoons, then head out deeper into the ocean in search of the best diving locations. There are 5 different island hopping trails and they can all be combined with either snorkelling or diving.

Coron, on the other hand, is far less developed. This is primarily a backpacker’s destination, with the focus being entirely on stunning nature and diving opportunities. The area near town is famous for being one of the best places in the world for wreck diving. Since it was a place for many naval battles during WW2, there are no less than 15 different ships which have sunk in the vicinity.

If you venture to the more remote parts of Coron though, you stand a chance to encounter some of the most interesting creatures in the Philippines. The area up north is famous for its large population of sea cows (Dugong as the locals call them), while the area west of town offers large schools of barracuda fish and an occasional encounter with blackfin sharks or manta rays.

Camiguin island is one of the smallest provinces in the Philippines. This island is famous for its volcanic nature, with no less than 7 different volcanos covering its tiny surface. This leads to some of the most unique and interesting diving sites you will ever see, as well as fantastic options for hiking through thick jungles full of wild animals.

While it does offer the more usual diving attractions such as sharks and turtles, Camiguin’s most notable diving sites were created thanks to its volcanic activity. You can dive through the sunken cemetery – the remnants of an old town which was completely sunk by Mt.Hibok-Hibok’s violent eruption.  Or, you can go explore the black forest – a large coral reef system completely covered in ash by previous eruptions.

Donsol and the Bicol area

Many people who come diving in the Philippines to seeing whale sharks. These gentle giants are one of nature’s most special creations, and a chance to see them in the wild is something everyone would relish. The best place to do so is in Donsol, where whale sharks can be seen almost throughout the entire year.

If that wasn’t enough, Donsol is also very close to Mt.Mayon – one of the most beautiful and perfectly shaped volcanos you’ll ever see. The volcano is quite active, so make sure you check the readings before attempting a visit to the area. If it is safe, you can complete the hike to the summit within a single day, although longer hikes of multiple days are also highly recommended. These longer treks would allow you to better familiarize yourself with the local wildlife – especially renowned for the large selection of birds.

These two locations are very close to Manila and so they are a good choice for those who don’t have much time to travel around the Philippines. You could be at a nice beach resort within a few hours, and spend the next few days either relaxing on the beach or diving at some really nice diving sites.

Batangas is the closer of the two. Located just south of Manila, it will take you between 2 and 3 hours to reach any part of this province. On your way, you will also pass by Taal Volcano and Pagsanjan Falls, and should strongly consider making a quick stop there and checking those out. The best part of Batangas for diving is called Anilao, and it doesn’t fall too much behind the other places we have mentioned in this guide.

Puerto Galera is a beach town on the island opposite of Manila. You’ll need to drive to Batangas and then take the ferry to get there, so total travel time would be 4-5 hours. The diving there isn’t as good, but the major upside is the beaches. It’s a very developed tourist spot, so you can expect to find very good resorts and excellent places to eat and drink at night.