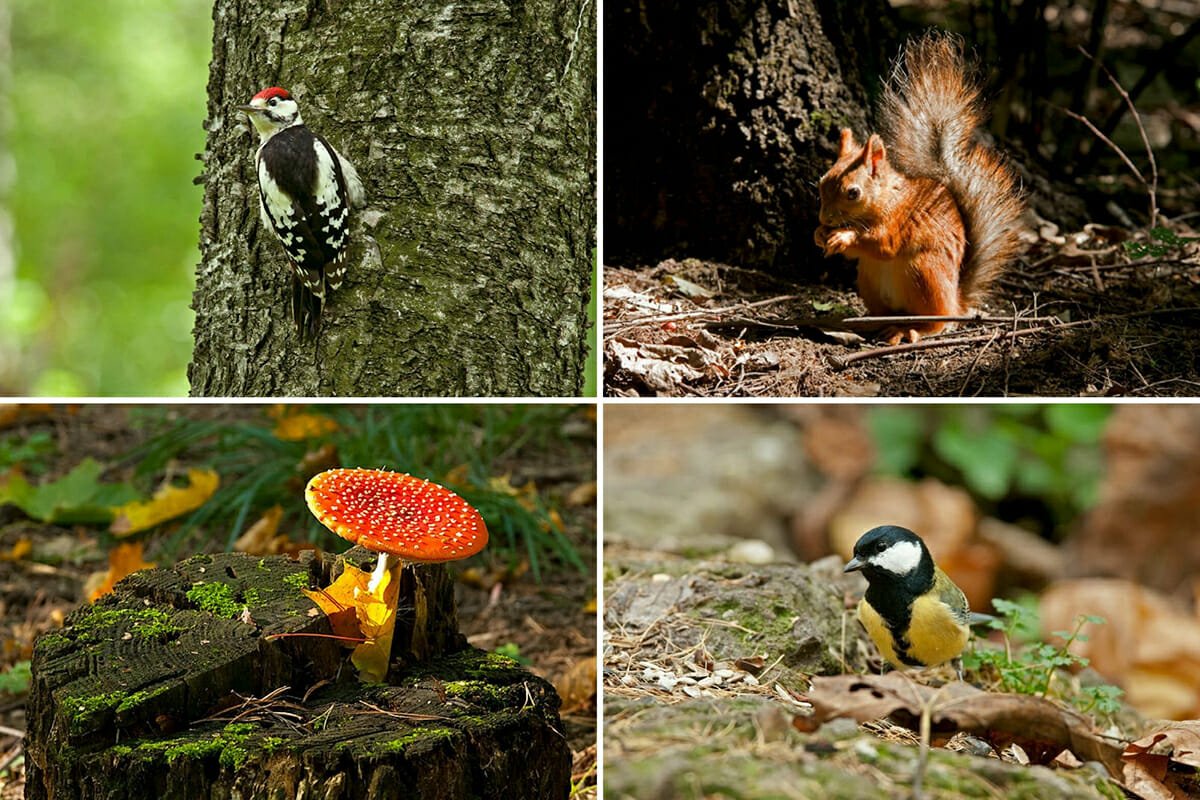 Despite the rapid rate of urban development, Moscow is still quite a green city. It is surrounded by large parks and tracts of forest on the fringes of the city, and its center is dotted with lush green city parks. Many of Moscow parks are also historical sites, established in the former residences of Russian nobility.

The parks are home to a few species of mammals and a wide variety of birds. The best parks for finding animals in Moscow are the Botanical Garden, Sparrow Hills (Vorobyovy Gory), Kuzminsky Park and Estate, Kuskovo, and Kolomenskoye. Over this summer I spent my weekends exploring the wildlife of Moscow parks. After living in Australia and Thailand for over 10 years, I was re-discovering Moscow nature with new eyes and a touch of nostalgia.

One morning I discovered a small creek in Kuzminsky park that was popular with birds, and after sitting quietly at that creek I saw more birds in about 30 minutes that did in a full day walking around the forest.

The ponds at Kuzminsky park turned up two species listed as ‘Threatened’ in Moscow Red Book. Black-headed gull and Common tern. Both species, though present in small numbers, seemed to make a rather good living on the abundant fish in the ponds.

I was told that spring came late this year and the gulls turned up a week too early, while the ponds in the park were still frozen. Hungry, the birds kept flying over the ponds and the surrounding city blocks screaming in incomprehension and desperation, until the weather turned and the ponds started to thaw.

The most common waterbird in Moscow city parks, however, is the Mallard duck. They can be found in virtually any park in the city that has a pond. Right in the city, there is another park – Chistie Prudy. It is a good place to see the Ruddy shell ducks.

While Patriarshiye Prudy park is the only park in Moscow where I found the Mute swans. The swans used to be common in Moscow, but over the last few years, they all but disappeared.

The best place for spotting waterbirds near Moscow is Biserovsky fish farm or ribhoz. To reach the farm, catch the train to Kupavna station and then catch the minivan taxi (marshrootka) to Biserovsky ribhoz.

Birds of the open fields

The boundary where the open habitat meets the edge of the forest was good for the Spotted flycatcher, Tree pipit, and Yellowhammer.

I found a nest of Red-backed shrike in the bushes and watched the family of shrikes keeping busy feeding their almost grown chick.

Birds of prey in Moscow parks

Birds of prey are harder to spot in the city. I have only seen a Northern Goshawk in Kuzminsky park. The bird flew very low across the path and disappeared into the forest.

I also found their nest – an impressive structure made out of large sticks, sitting in the fork of a pine tree. The forest floor below was littered with half-eaten pigeon carcasses, bird bones, whitewash and shed feathers of the goshawks themselves.

In the last few years, more and more birds of prey have been popping up in the city. Eurasian sparrowhawks, Common kestrels, Eurasian hobbies, Northern goshawks and Red-footed falcons are all frequently spotted in Moscow parks.

I’ve done most of my wildlife watching in Kuzminsky Park, but most of the larger parks have the same mammal species. Kuzminsky Park supports a number of mammalian species, but they are quite difficult to spot. Most species that is. The European red squirrels (Sciurus vulgaris) are virtually everywhere; they are one of the most common wild animals in Moscow city parks. They had their young in spring and now are busy raising the next generation. And since unlike their Asian cousins they can not glide, they have to do a lot of running around.

The Field mice (Apodemus agrarius) are reasonably common in the park, though they are not as conspicuous here as in Vorob’evy Gory.

There are also Wood mice (Apodemus sylvaticus) in the park. I only ever saw them in one spot – at a bird feeder near the Upper Lake, and this species is quite shy and hard to photograph.

I managed to grab one lucky shot when I noticed one of them run into a burrow under a bush. I aimed my camera at the burrow entrance and waited for it to come out.

The burrow itself was really cute – it had a mushroom growing in the spot where a human house would have a chimney. The little guy came out and let me take a couple of images of itself, its burrow, the chimney and all.

The park is also home to a large population of European mole or Обыкновенный крот (Talpa europaea). The forest floor is dotted with little mounds created by their diggings. Though to see the animal itself is no easy feat.

I’ve only seen a couple that turned up dead on the bank of a stream. One was taken by a Hooded Crow, but the second one, that turned up in the same spot a couple of weeks later, had no signs of predation on it.  These animals have an ingenious solution to fresh food storage and waste disposal situation.

In late autumn they collect a huge number of earthworms and stash them in large piles inside their tunnels. In the cold weather, the worms become very sluggish and can’t crawl away. But since they are still alive the mole has a store of fresh food that lasts it all winter. In the spring, as the temperatures rise the left-over worms simply slither away.

As I kid I saw a Water-rat and I am told they still live in the ponds. There is a good population of European red foxes in the park, though I haven’t seen any, as I haven’t visited the park after dark. There are also rabbits, hedgehogs and probably a few more species of rodents.

Some parks also support populations of the introduced Muskrat (Ondatra zibethicus). This species is native to North America and it has been artificially introduced in Europe in 1905. It quickly colonized most of Europe’s waterways and is well established now across the continent. In the former Soviet Union, Muskrat was prized for its fur and over 80 000 animals were released into areas of appropriate habitat. The species quickly established a population many times exceeding that of Europe. It has become a common part of Russia’s fauna.

The success of muskrat in Europe and Russia is attributed to its high reproductive rate and to the fact that it managed to fill an empty niche (rather than to the lack of natural predators). The only species that occupy similar habitats are a water rat and a beaver. First one is much smaller and the other one is much bigger and it switches to a different diet in winter.

The animal I was watching was feeding on the surface collecting weed and blades of grass and ferrying them over to its burrow under the bank of the pond. I watched it for at least half an hour. Every time it got disturbed it dove under and swam towards the bank. As usual, most people visiting the pond didn’t know the animal existed.

The only reptiles I came across in Moscow parks were the Red-ear sliders – the turtles native to South American. They are some of the most common exotic animals in urban city parks across the world. I saw them in Central Park in New York, in a few parks in Sydney – they are everywhere.

Given the harsh cold winters in Russia, only the hardiest frogs survive here. The only amphibian I have spotted in Moscow is the Eurasian marsh frog.

In late summer, Kuzminskiy forest explodes with mushrooms of various shapes and sizes. And of course, the more appetizing they look – the more inedible they are all the way to the psychedelic Amanita muscaria. The literal translation of its name from Russian is – Fly Killer. Much more sinister plants than the common fungi in the Asian jungle for example.

In winter, there are significantly fewer people in the park, there are even fewer animals, as not many of them are equipped to handle the freezing cold weather. Some go into torpor, others, like most bird species, migrate to greener pastures. But the snowy landscape gives the parks a completely different look.