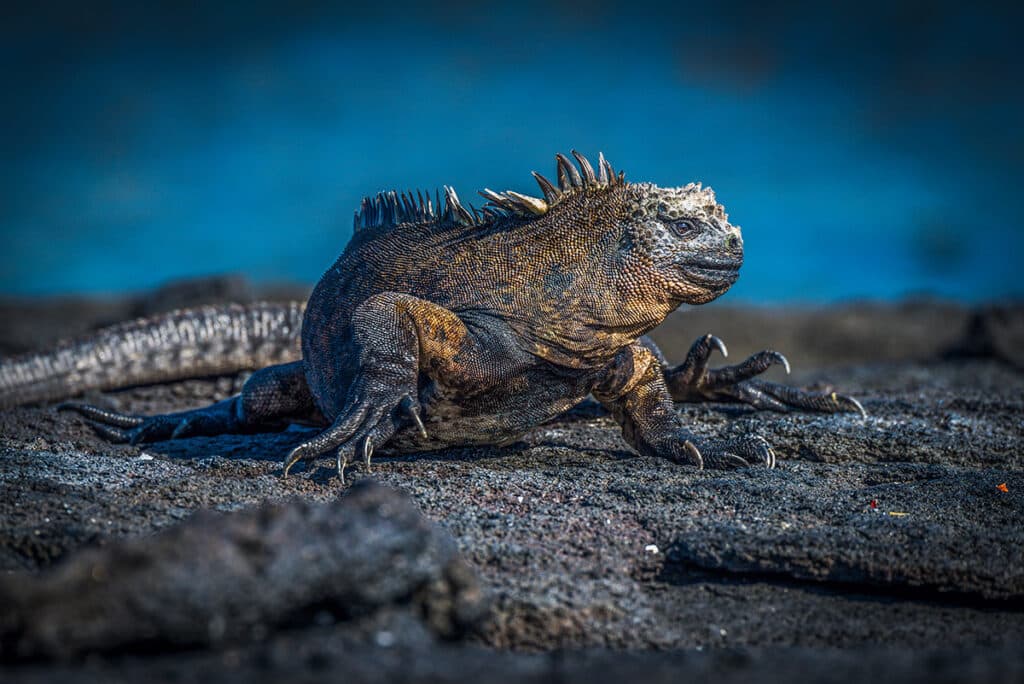 Traveling to the Galapagos archipelago is a living adventure. In fact, it’s the ultimate getaway to a remote destination, filled with rich marine life, unique wildlife, pristine beaches, and breathtaking views.

And while you’re traveling to the birthplace of Charles Darwin’s theory of evolution, why not explore the majestic landscapes, learn about the scientific history that took place on the Galapagos Islands, and see the endemic wildlife that lives only in this area?

Galapagos is famous for all the right reasons, and if you’re reading this article, you probably agree with us. We’re here to help you decide which islands to visit in Galapagos and the best things to do while exploring the area.

Top Things to Do in the Galapagos Islands

Before we go island hopping and learn a thing or two about the best Galapagos islands, let’s see the top things you can do in this majestic area. There are plenty of activities you can participate in, from swimming with marine animals to lazing on the beach to climbing a volcano.

Close-up encounters with endemic species are a hell of an adventure. However, enjoying a relaxing evening at some of the best beaches on the Galapagos is an experience of a lifetime as well.

The beaches on the Galapagos islands are different from those in Bali or Ibiza, or even Hawaii, where you can have a laidback and calm multi-day vacation. The way to explore Galapagos beaches is by going on an island-hopping adventure.

Most visitors to the Galapagos book a cruise to the islands, but if you want to visit more islands and get a proper island experience, you can check the Galapagos island yacht charter and consider your options. A charter cruise is a better option for a number of reasons, including the efficiency, availability, and flexibility of the itinerary.

Some of the most exquisite beaches to visit in the Galapagos are Tortuga Bay on Santa Cruz, Gardiner Bay on Española Island, Bartolome Island beach, El Garrapatero on Santa Cruz, Post Office Bay on Floreana Island and the unique Red Sand Beach on Rabida Island.

One of the best-known Galapagos animals is the Galapagos tortoise – an impressively large animal with a lifespan of 100 to 150 years.

No matter which Galapagos Island you’re visiting, you’ll have close encounters with local wildlife. You can sunbathe with sea lions, swim with sea turtles, or snorkel with penguins. The possibilities are limitless. But remember to keep a safe distance and avoid interacting closely with these animals.

One way to immerse yourself into Galapagos nature is to grab a paddle and hit the waters of the Itibaca channel. This channel divides the islands of Santa Cruz and Baltra and is flanked by lava rock cliffs and mangrove forests.

Make sure to keep an eye out for the white reef sharks in these waters; for more safety, you can hire a guide to take you through the channel.

Hike to an Active Volcano

That’s right, you can hike to the top of an active volcano in the Galapagos! The majestic Sierra Negra Volcano on Isabela Island towers nearly 4,500 feet (1370 meters) over the island. Once you reach the top, you can peer into Sierra Negra’s enormous crater – the second largest on the planet.

Sierra Negra is the most active volcano in the Galapagos, with the most eruption in the summer of 2018. But don’t worry, seismologists are keeping a close watch on the volcano’s rumblings and will close off access if it becomes unsafe to visit.

The Galapagos is an archipelago made up of 19 islands that stretch for 137 miles between the northernmost Darwin Island and the southernmost Española Island. Many of the islands can be visited via the land-based option, while some can only be reached on a multi-day cruise or a sailing adventure.

The three biggest islands are Isabela, Santa Cruz, and San Cristobal, and you can visit several smaller islands on day trips from either one of them.

There are no ‘bad’ islands in the Galapagos, but if you have limited time, you’ll need to decide which are the best Galapagos islands for you. Read our recommendations below to help you narrow down your choices on which islands to visit if you would like to maximise your wildlife-spotting opportunities.

Easily reachable from San Cristobal, Española Island is one of the best Galápagos Islands for wildlife enthusiasts. It is home to Suarez Point – the world’s last breeding colony of Waved Albatrosses. For the best chance of seeing the albatrosses, visit between April and December.

The island is also a good place to observe the blue-footed booby mating dance (June – August).

Other bird-watching highlights include a colony of Nazca boobies and the endemic Española Mockingbird.

The island even has its own kind of iguana – Espanola marine iguana or Christmas iguana – the only species that is red and green in color.

And once you are done with your bird-watching activities, relax alongside the sleepy sea lions on one of the Galapagos prettiest white coral sand beaches at Gardner Bay.

Isabela Island makes up 58% of the land mass of the Galapagos and is the largest island on the archipelago. It’s more than 1 million years old, yet it is one of the younger Galapagos islands with active volcanoes.

Isabela island was formed by six volcanoes: Wolf, Darwin, Cerro Azul, Alcedo, Ecuador, and Sierra Negra, making this area one of the most volcanically active worldwide.

If staring into the glowing vents of an active volcano crater sounds like your type of adventure, then don’t miss a hike to Sierra Negra volcano.

The bay of Isabela Island is also the perfect place to mingle with Galapagos Island sea lions. Just don’t forget that you are a visitor to their home and respect their space.

If you are keen to see a high concentration of wildlife in a small area, head to Las Tintoreras. It is a tiny island or an islet just 10 minutes off Isabela Island. Often referred to as the “mini Galapagos”, Las Tintoreras is a marine wildlife haven. You can spot the Galapagos penguins, snorkel with sea turtles and see a huge colony of marine iguanas. And don’t miss Shark Alley for a chance to encounter some of the predators attracted to the islet by such a high concentration of prey species.

For something a little more low-key, visit the tranquil town of Puerto Villamil, famous for its beautiful white sand beaches and lagoons that are home to pink flamingos.

Santa Cruz is the main tourist hub in the Galapagos and a convenient base for exploring the nearby islands. It’s home to Charles Darwin Research Station and Academy Bay, a famous harbor that was named by the California Academy of Sciences Expedition in the 20th century.

What makes Santa Cruz one of the best Galápagos Islands is an almost endless variety of things to do and places to explore.

Tortuga Bay, along the island’s southern coastline, is one of the best places in the archipelago to encounter Galápagos’ marine turtles. Visit between January and February, and you might spot the turtles laying their eggs. Your best chance to see the hatchlings emerge and make their way to the sea is between April and May.

To see the terrestrial cousins of the turtles, the long-lived giant tortoise, make your way to Rancho Primicias.

One of the most interesting hikes in Santa Cruz takes you to the island’s thickly forested highlands to Los Gemelos, which are twin volcanic craters that were formed by the collapse of the roof above the volcanic chamber.

Also in the highlands, In Bellavista village, are the Lava tunnels, formed when the outer surface of lava flow hardened while the molten lava inside the shell continued to flow.

Back on the coast, there are popular diving sites, including beginner-friendly Las Grietas, where you have a good chance of spotting sea lions, penguins and sea turtles.

San Cristobal is the smallest of the three main islands and has the most relaxed atmosphere. The island has been dipped in colonization since the town of Puerto Baquerizo Moreno was used as a penal colony. And now it’s a coastal village where locals go fishing. There are numerous snorkeling and diving spots, including Isla Lobos and Kicker Rock.

Kicker Rock is one of the most iconic formations in the Galapagos. Its actual name is León Dormido (Sleeping Lion), and it is a 140-meter-tall ancient volcano cone. Here, you can dive (if you are an experienced diver) or snorkel with sea lions, white-tipped sharks, eagle rays, and sea turtles. Occasionally, Galapagos sharks, hammerhead sharks, and dolphins might turn up as well.

La Loberia beach is home to a sea lion colony, as well as marine iguanas, lava lizards, and a few bird species.

San Cristóbal is also home to one of the most iconic hikes in the archipelago – Cerro Tijeretas, famous for the sweeping vistas of Wreck Bay and Kicker Rock.

Floreana Island is within easy reach from either Santa Cruz or San Cristobal and can be visited without joining a cruise.

It is one of the best Galápagos Islands for spotting Darwin finches, as well as pink flamingos, blue-footed boobies, and Galápagos penguins. Green sea turtles and sea lions are also a common sight on Floreana.

As far as snorkeling sites go, Devil’s Crown is considered one of the best snorkeling points in the entire archipelago.

Hopefully, this guide helped you get a better idea of what you can expect from an adventurous trip to the Galapagos. While you might have your preferences, budget, and bucket list, some of these islands must be on your itinerary!

Check the latest vaccine requirements, travel restrictions, and visa requirements before your trip.