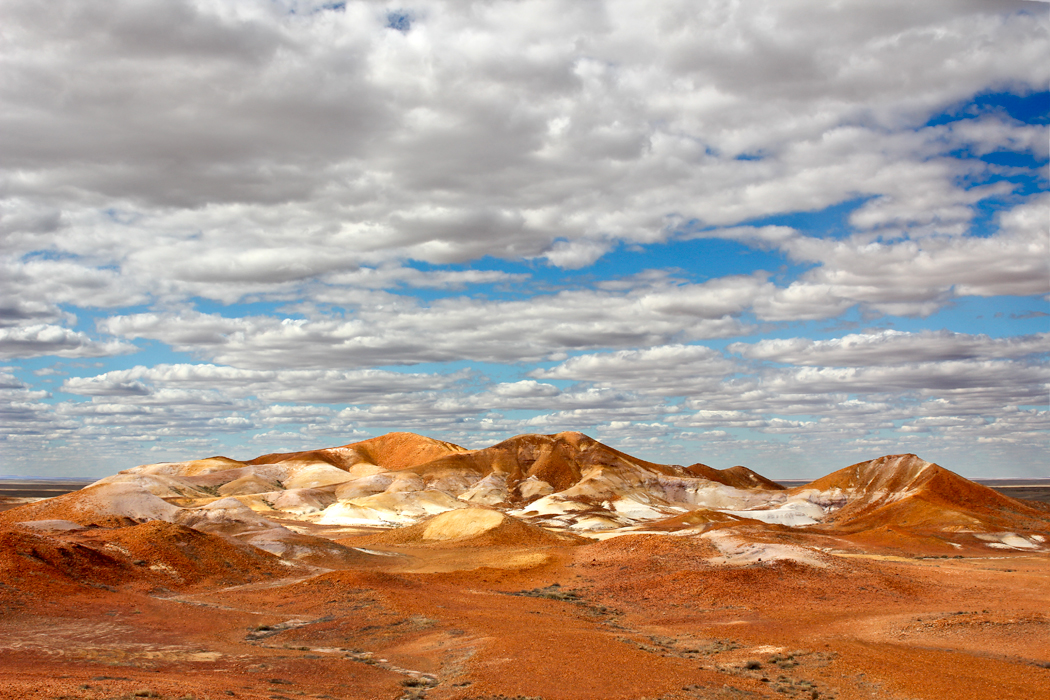 Located in one of Australia’s harshest environments, the Kanku-Breakaways Conservation Park, commonly referred to as simply Breakaways, Coober Pedy is one of the most striking hidden gems of the Australian Outback.

The reserve is easily reached from the opal-mining town of Coober Pedy, just 32 km away, but its dramatic weather-beaten landscape would be more at home on some extra-terrestrial world in a galaxy far-far away.

The Breakaways are made up of a series of orange, white and red eroded hills rising over the desolate rocky plane. It is thought that the landscape of the Breakaways formed through the evaporation of an ancient inland sea, triggered by the continental shift that warmed the climate. The formations of the plateau would have been a chain of islands rising out of the ancient sea.

The rocky plane at the foot of the multi-coloured hills is known as the stony gibber desert in Australia, and, here it looks remarkably similar to the images from the surface of Mars.

The reserve’s striking appearance makes it the perfect backdrop for alien and post-apocalyptic movies. Vin Diesel’s “Pitch Black” – the first film in the Chronicles of Riddick series was filmed right here in the Breakaways.

While devoid of predatory monsters that decimated the characters of Pitch Black, the Breakaways Reserve has its fair share of challenging conditions, such as ground temperatures of up to 65 degrees Celsius in summer.

The Breakaways lie 32 km north of Coober Pedy and can be reached via Stuart Highway (23 km) or Kempe Road (15 km).

There are two lookouts on the escarpment that you can drive right up to for breathtaking views of the valley and the colourful hills. These hills have “starred” in a number of other films including “Mad Max Beyond Thunderdome” and “Ground Zero“.

As you continue on the road from the lookouts, it takes you to the rocky plain below. Here you can go for a walk to check out the hills at a close range. This area is a photographer’s paradise, so make sure to bring your camera to the Breakaways.

Once you are done exploring, follow the road to the famous Dingo fence – a 5,614 km construction built in the late 1800s to exclude dingos from the sheep country in south-eastern Australia.

Near the fence, the landscape changes from the Martian surface to the moonscape with cracked clay ground peppered with small rocks. Known as Moon plain, this area appeared in a fair share of movies as well including “Priscilla Queen of the Desert” and “The Red Planet.” Pay attention to the ground here and you may find some fossilized seashells.

From the Moon Plain follow Kempe Road back to Coober Peddy. All up, it’s a 70km round trip.

Before you head to the Breakaways, make sure to pay the vehicle entry fees ($10) at Coober Pedy Visitor Information Centre at the District Council of Coober Pedy on Hutchison street

You can also find Riddick’s spaceship  – “Hunter-Gratzner” parked in front of an opal store in the centre of town.

There are plenty of things to do in Coober Pedy to fill a couple of days. We used the town as an overnight base on our epic Adelaide to Darwin road trip. Depending on how much time you have in town, here are some fun things to do:

Where to Stay in Coober Pedy

Coober Pedy is famous for its underground lifestyle, so to properly experience the town, you should stay in one of the underground accommodations. Here are some of the best options.

If you are looking for peace and comfort, Dug out B&B apartments. the most highly-rated accommodation option in Coober Pedy should be your first choice. Located a 5-minute drive from the central part of town it is quiet and peaceful and offers stunning sunrise views. The apartments are modern, well-stocked and feature very comfortable beds.

Di’s Place is a touch of luxury underground. This quirky underground three-bedroom palace features beautiful stonework, a spa bath and a large outdoor veranda with a BBQ and laundry. Di herself is a wonderful host who makes you feel like you are visiting a friend’s place.

In Ali Underground apartments, you have a choice of sleeping in a queen-size bed dug into the wall or in the open plan area of the studio. The apartments have everything you need and strike the perfect balance between modern comfort and a traditional dugout.

If you are looking for a place of your own that won’t break the bank, Holly Place is a two-bedroom apartment with a very comfy king-size bed in the master bedroom, a fully equipped kitchenette, a bathroom and a parking spot.

If you like your rooms to be spacious and be right in the thick of it (in relative terms, in Coober Pedy), consider Comfort Inn Coober Pedy Experience. The rooms and the common areas are quite spacious and have a number of interesting ‘cave’ features.

1 thought on “The Breakaways, Coober Pedy & the Dingo Fence”