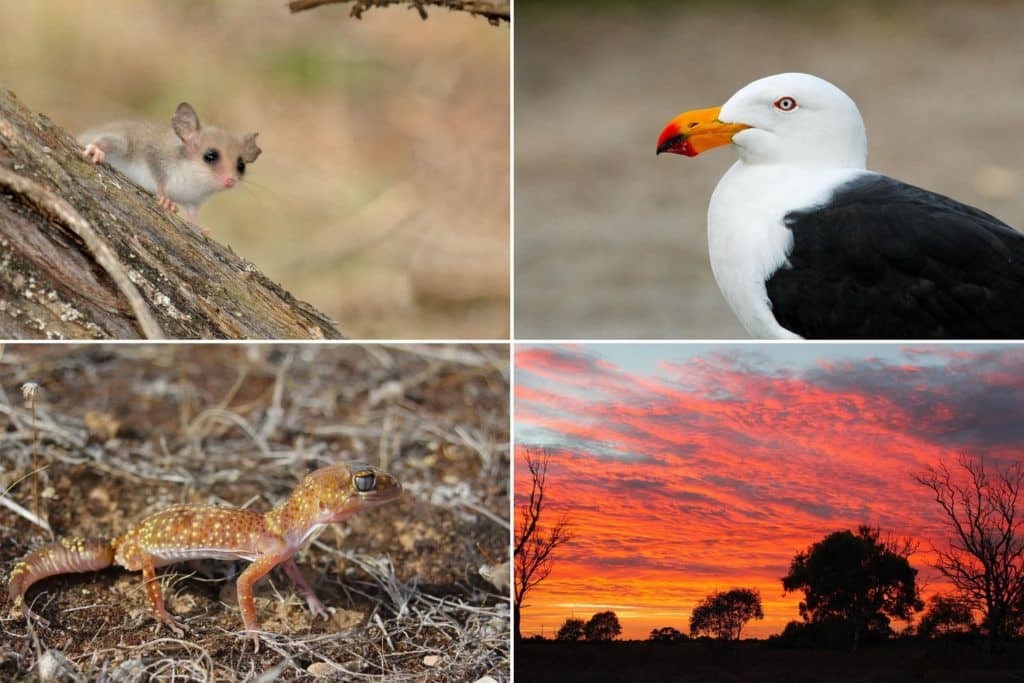 By the time of my second survey at Dakalanta Sanctuary, I was mentally prepared for the specific challenges of doing a wildlife survey on the Eyre Peninsula, or rather on this particular remote rocky property. Namely, digging trenches in solid bedrock in 40-degree heat and having no running water, which meant no showers after working up to your elbows in dirt for days on end.

Another plus was that this year was quite dry so the rodent populations, particularly the introduced House mouse we at reasonable densities. My last survey at Dakalanta coincided with a period of rodent boom that was triggered by above-average rainfall in the region and I remember mice digging underneath my tent all nights long.

When the last survey finished and I was packing up my tent, I discovered that the mice have dug an elaborate network of underground tunnels under my tent. No wonder I could feel them scurrying underneath the tent!

Like most AWC sanctuaries, Dakalanta used to be a working farm. And of all the sanctuaries I visited in the South-East region, Dakalanta was most heavily scarred by development. Most of the landscape of the property is cleared pasture with a hard rocky surface beneath the short grass. Life, however, always finds a way and miraculously, some of Eyre Peninsula wildlife species managed to persist on the property.

Despite the hardships and the lack of creature comforts, Dakalanta has one major thing going for it – a large population of Western Pygmy Possums. With their huge eyes, huge ears and a prehensile tail that is rolled into a tight coil when the animal is at rest,  pygmy possums are the cutest species of Eyre Peninsula wildlife. After spending a few hours in the pitfall trap, they look like sleepy, grumpy mini Yodas.

For an arboreal species, the pygmy possums spend a significant amount of time on the ground, which is how they get caught during the pitfalling surveys.

Each morning, as we turned up to each consecutive site to check the traps, we were crossing our fingers to find a pygmy possum in one of the buckets. And in most cases we did. Dakalanta has quite a significant population of these adorable little critters.

The only other small mammal we found in Dakalanta was the feisty little dasyurid – Little long-tailed dunnart. No bigger than a mouse, whatever the dunnart lacked in size, it makes up for with attitude.

Another favourite of Dakalanta surveys was the Barking gecko (Underwoodisaurus milii). Not only did it look like a beagle puppy, it also had some serious moves when it performed its threat displays. The ‘dance’ routine involved the gecko standing tall on its legs and bouncing gently by bending and then straightening its knees.

On the opposite end of the reptilian size scale are the Dakalanta’s Shinglebacks – the huge skinks with conspicuously blue tongues. We’ve seen quite a few of them while moving between the survey sites.

One afternoon we came across a large Eastern brown snake hunting at our camping site. It found something of interest in a small underground burrow and kept trying to get it out by inserting its head into the burrow and writhing its powerful body trying to get a grip on whatever it was hunting.

After about half an hour it got frustrated and slithered away. And of course, we followed it. The fact that it is one of the most venomous snakes in Australia only added more excitement to the encounter. But eventually, the snake got so bored with us – it actually yawned!

Most of Dakalanta has been cleared of native vegetation, but in the south of the property, there is still a sizable patch of river red gum woodland. These gum trees provide perfect roosting hollows for owls and many other critters.

We took the opportunity to check some of the roosting sites for pellets and accidentally flushed out a Barn owl. It hopped out of the hollow and literally hung around for a bit by holding on to the tree with one foot.

Using ‘pellet collection’ as an excuse, I returned as often as I could to the patch of river gums. It was a good spot to find Australian Ringnecks and Mulga Parrots.

Apart from the creature comforts, I was keen to find the Rock parrots that are endemic to South and Western Australia.  I glimpsed on an earlier trip to town. And there they were, feeding on seeds in the exact same spot on the coastal rocks in the late afternoon.

They were surprisingly quiet, which is an unusual trait for a parrot. They just minded their own business, probably concentrating hard on being blow off the rocks by the gale-force wind. The coast was also a good spot for watching the impressively large Pacific gulls, soaring over the ocean.

The following morning, before departure we had a quick walk along the coast but did not see many birds apart from some Oriental plovers down on the beach and a Singing honeyeater hopping among the rugged rocks.

The farmland around Elliston was teaming with Cape Barren geese – handsome birds about the size of a domestic goose.

2 thoughts on “Wildlife Survey on the Eyre Peninsula, South Australia”