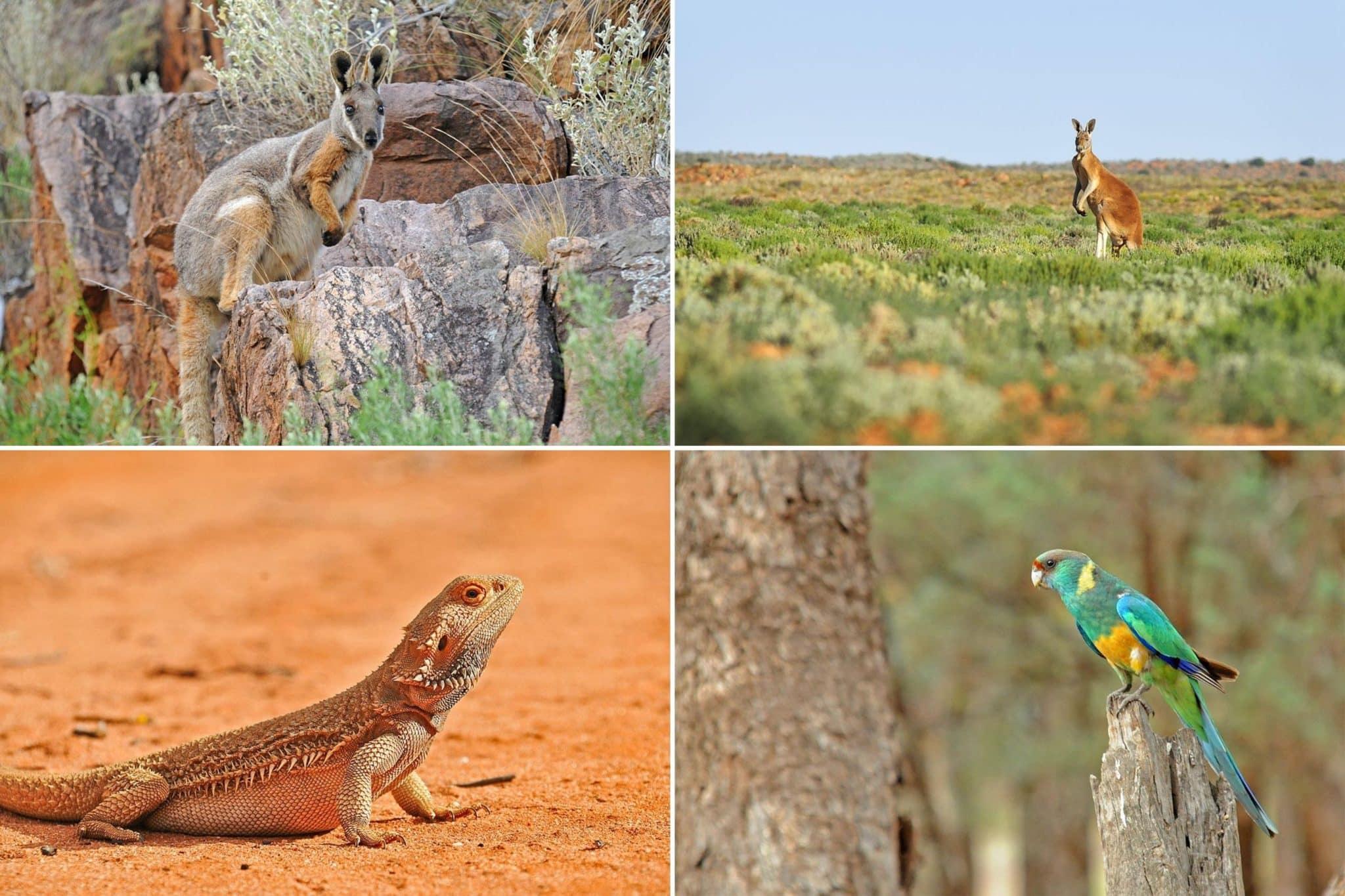 If you are looking for a good place to see some of the iconic Australian wildlife species amidst beautiful rugged scenery, look no further than Flinders Ranges National Park in South Australia. I visited Flinders on many occasions, for wildlife surveys and camping holidays, so it seemed like a good idea to share my tips on finding and viewing wildlife in Flinders Rangers. But first, let me introduce the incredible landscape of Flinders Ranges.

When talking about the Australian landscape, mountain ranges are not an obvious topic of conversation. Australia is generally quite a flat continent, with an average range of elevation of only 330 meters, which is probably one of the lowest in the world.

This is because Australia is the world’s oldest continent and its mountain ranges withstood millions of years of geological upheavals and weather erosion. So what Australian mountains lack in size, they make up in age.

Flinders Ranges is the largest mountain range in South Australia and one of the most ancient environments on the planet. The oldest evidence for animal life on earth was found fossilized here, suggesting that animals may have been present on earth at least 70 million years earlier than previously thought.

An entire new geological period, the Ediacaran (635-542Mya) had to be established to mark the appearance of these strange primitive sponge life forms.

What animals live in the Flinders Ranges?

Flinders Ranges stretch for 420 kilometres across South Australia. This timeless landscape is a medley of towering mountain peaks, dramatic gorges, dry river beds, a number of protected areas and an abundance of wildlife.

The most handsome of Flinders Ranges animals is the Yellow-footed rock wallaby. About half the size of a kangaroo, this species is superbly adapted to the rocky environment of the rangers. Apart from their amazing agility, the Yellow-footed rock-wallabies are equipped with a rusty-grey coat that makes them almost invisible among the rocks.

It does take a leap of imagination to see a hopping animal as a specialist of rocky outcrop habitats. But if you watch these wallabies race among the steep cliffs, it seems like the most natural thing to do.

The best time to look for yellow-footed wallabies is in the early morning and in the late afternoon when the wallabies sun themselves on the rocks of the gorge. Like most wallabies, yellow-footed rock wallabies live in colonies that consist of several breeding females, their offspring and a dominant male.

Thanks to the establishment of permanent waterholes for domestic stock, other native Australian animals such as Red Kangaroo, Western Grey Kangaroo, and Common Wallaroo are quite abundant in the Flinders. The more open areas of the park are good for spotting the larger macropods and they can be seen throughout the day, but early morning and late afternoon are still the best time for spotting the animals and certainly for photographing them.

A convenient place to find kangaroos is the environs of Wilpena Pound campground. The Pound is of the most dramatic Flinders Ranges attractions. It is a large natural amphitheatre that covers nearly 80 km². The campground nearby is the perfect base for exploring the area.

You don’t even have to leave the campground to see some of the local inhabitants. Western Grey Kangaroos – perhaps the most abundant of Flinders Ranges animals, are quite happy to relax at the campground during the heat of the day.

Common Wallaroo is smaller than the kangaroo and bigger than the wallaby, hence its name – Wallaroo. They can be easily spotted in the open grassy areas of Flinders Ranges.

Most Australian animals are unique, but none are more so than the Monotreams – the egg-laying mammals. In Flinders Ranges you have a good chance of spotting a Short-beaked echidna. Between the months of June and September you could even spot an echidna train – a female echidna followed by a few eager males.

The smallest species of wildlife in Flinders Ranges are harder to find – they are tiny, well camouflaged and active mainly at night. You may not spot them on a wildlife safari in Flinders, but they are very much a part of the local ecosystem. During wildlife surveys, we recorded two species of Dasyurids – Australia’s marsupial predators in the area. The Common dunnart and the Little long-tailed dunnart are both about the size of a mouse. But what they lack in size they make up in attitude!

As you drive around Flinders you are likely to spot Wedge-tailed eagles – Australia’s largest bird of prey. The smaller raptors common in the park are Brown falcons, Nankeen kestrels, Black kites and Black-shouldered kites. At night, you might spot barking owls and southern boobooks.

One bird that will be hard to miss is the Emu. Standing over 2 meters tall, these birds tower over the landscape like giraffes on the African savanna. Be careful not to run into a male Emu on foot, especially if he is tending young chicks. Male Emus get quite aggressive when they feel that their brood is threatened.

The rocky environment of Flinders Ranges is great for spotting reptiles. One of the most common reptilians in the park is the Bearded dragon. In early spring (September – October) when these lizards emerge from their winter burrows they can be found on virtually any surface in the park – on the rocks, on the sandy roads, on fence posts and even in the tree branches.

If you approach them they may flatten themselves to the ground trying to merge with the terrain to avoid detection. Please look out for these guys on the roads when you travel around the park.

The rocks around Wilpena Pound are good for spotting Tawny dragons and the colourful Red-barred dragons, as well as a multitude of different skink species. The trails in the park are also good for Sand goannas and Shingleback lizards.

At night, the reptile world is dominated by geckos, like the Barking gecko, Bynoe’s gecko, Velvet gecko, Beaked gecko and Marbled gecko. Geckos are harder to spot, so here are some images from the wildlife surveys in the area. A few geckos and a very cool legless lizard that looks just like a small snake – Butler’s legless lizard

The best way to see wildlife at Flinders Ranges is by exploring the area on foot. There is a range of walking trails throughout Flinders Rangers National Park from short strolls to multiday adventures. I only did the walks around Wilpena Pound during my camping holidays in the park and they were great for spotting reptiles and birds.

One of the best Wilpena Pound walks is the Wangara Lookout Hike. The walk is 7km return and takes about 3.5hrs to complete.

The trail starts at Wilpena Visitor Center and follows Wilpena Creek through the Pound Gap. This is a great spot for birdwatching.

When you arrive at the info shelter, continue along the tail to the Hills Homestead. The open area around the homestead is a good place for spotting Kangaroos.

From here the walk climbs to the two lookouts on the pound edge. The climb is quite hard, but the views of the ancient pound from the lookouts are absolutely worth the hard work. The rocks of Wilpena Pound are great for spotting sun-baking reptiles.

Wilpena Pound Reserve also offers some leisurely guided walks. The 2-hr walk into Wilpena Pound takes you to the Hills Homestead with an option to climb to Wangara Lookout.

Or, if you are keen to learn about the history of life in the Outback, you can opt for a cultural 2-hr walk to the Old Wilpena Station.

How big are the Flinders Ranges?

Flinders Ranges stretch for over 430 kilometres (265 mi) from Port Pirie to Lake Callabonna. There are a number of protected areas within the ranges, including Ikara- Flinders Ranges National Park, Bunkers Conservation Reserve and Buckaringa Wildlife Sanctuary managed by the Australian Wildlife Conservancy (AWC).

Do you need a 4WD for Flinders Ranges?

Generally, no. I have visited the park in a two-wheel-drive car and had no problem accessing any of the areas. However, since most of the roads in the park are unsealed, they may get quite muddy after heavy rain which would be problematic for the low-clearance cars. Check the forecast before you go and if it rained recently, stick to the main roads in the park.

Where to stay at Flinders Ranges

Wilpena Pound Resort is a lovely, wildlife-friendly resort near Wilpena Pound. It has a number of accommodation options ranging from camping to air-conditioned safari tents to resort-style accommodation.

The Wilpena Pound Campground, operated by the National Park has 40 powered campsites and over 300 unpowered bush campsites (starting at $14 for unpowered sites). The campground has three amenities blocks, laundry facilities, and a payphone. A nearby general store sells groceries, petrol and firewood.

How to get from Adelaide to Wilpena Pound

Fun things to do in Flinders Ranges

If you are looking to maximize the wow factor of your visit to Flinders Ranges, or if you are short on time take a few guided/organized activities.

At the end of the day, whatever you decide to do in Flinders Ranges, you will have an incredible experience that would leave lasting memories to keep reliving.