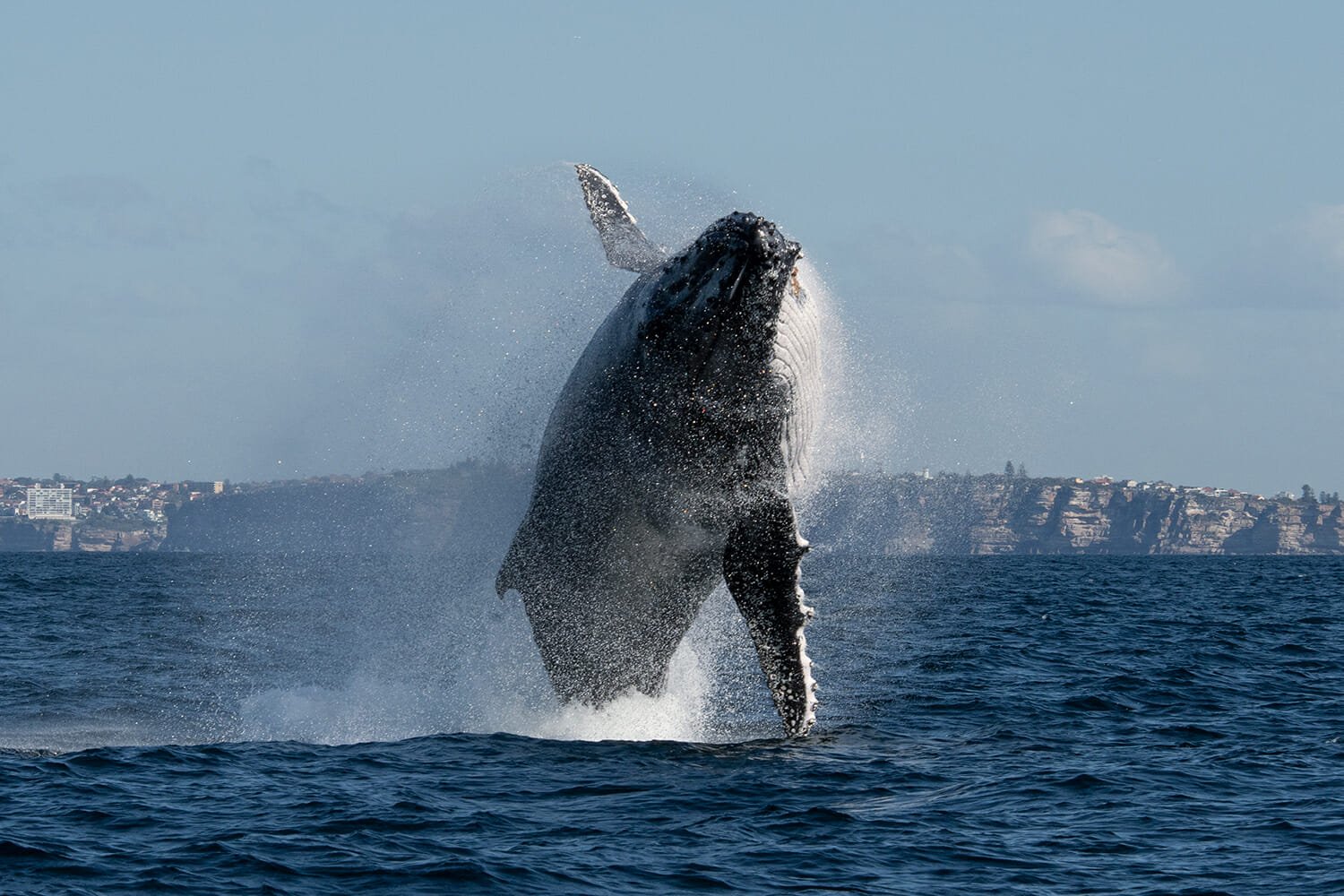 September is an exciting time to be out in the open ocean just outside of Sydney Heads. Humpback whale migration is in full swing and it is one of the most epic wildlife spectacles in Australia.

The boat is gently rocking under my feet, as I scan the glistening surface of the ocean, just off Sydney coast, for telltale blows of the surfacing whales. Suddenly, a 30-ton giant propels itself out of the water right in front of me.

It shoots up, arching its back and spreading its pectoral fins like an oversized ballerina until gravity pulls it back and it slams hard against the surface and disappears in a spectacular splash.

“It’s going to it again. Keep your eyes on the water”, urges the skipper.

We have been following a pair of humpback whales and they appear to have a pattern of four-minute dives followed by two consequent breaches.

This time we are ready. Holding our collective breath, we watch in awe as the gleaming body breaks the surface and launches upwards, water streaming down its sides. It twists sideways in mid-air and crashes back with a thundering slap.

“This, ladies and gentlemen, is a juvenile humpback whale,” announces the skipper. “It still has quite a bit of growing to do.”

I can hardly imagine an animal larger than this teenage acrobat. Yet a fully-grown humpback weighs on average 40 tonnes and can reach the length of 18 meters – a meter longer than our boat.

Once the splash clears up, a giant pectoral fin rises into the air, like a sparkling-white sail, followed closely by a barnacle-encrusted tail. The whale is rolling around just below the surface, full of energy after the summer-long feeding frenzy.

Humpbacks spend their summer feeding on krill in the freezing waters of Antarctica. Protected by a thick layer of fat, known as blubber, the whales can easily withstand the subzero temperatures of the Southern Ocean.

“But they can’t reproduce in the cold,” the skipper continues his informative commentary. “Newborn humpbacks don’t have enough blubber to survive in Antarctica”.

So each year, humpback whales undertake the 5,000-kilometre migration along Australia’s eastern coastline to the warm waters of the Great Barrier Reef, where they mate and give birth to their young.

Born in the tropical waters and weighing about two tonnes, the calves consume up to 600 litters of mother’s milk each day. And, according to the skipper, humpback’s milk contains a whopping 60 percent fat.

The newborn calves need all the nutrition they can get. Their main job is to fatten up quickly for their first journey to Antarctica in a few months’ time.

Meanwhile, things are heating up on board the Explorer, as more whales start breaching slightly further out. It appears that our playful juveniles piqued the interest of another pod of humpbacks nearby. One after the other, the excited cetaceans jump out of the water, as if it is a competition.

The experts estimate, that more than 30,000 whales take part in Humpback whale migration along the eastern coast of Australia between June and October. It is one of the most epic animal migrations on earth, and it is happening right on Sydney’s doorstep.

However, the numbers have not always been this high. Humpback whales were almost hunted to extinction in the 19th and 20th centuries. By 1978, when whale hunting was finally banned in Australia, there were about 300 whales left in the east coast migratory population.

The hunting ban was the key turning point for the whales. Over the next four decades, the humpbacks made an epic comeback from the brink of extinction. The experts believe that the current population has reached its pre-exploitation numbers, and it keeps growing at about 11 percent each year.

We see living proof of this growth when we spot a tiny calf travelling close by its mother’s side. It is no more than a couple of days old and has the distinction of being the first calf spotted off Sydney this year.

So while some cities in the world are all about culture with just a bit of nature thrown in, like swans living on Vltava River in Prague, or stalks nesting in Segovia, Sydney is surrounded by epic nature home to amazing wildlife, even if its culture is only a few centuries old.

In this post hide
1. What you Need to Know
1.1. Seasickness
1.2. Warm clothes
1.3. Sunscreen
2. More Wildlife Tours From Sydney

What you Need to Know

Whale watching tours depart either from Darling Harbour Wharf or from Circular Quay and last 3-4 hours. The whale watching season runs from May to November. From May to August, the whales are heading north to Tropical North Queensland and from mid-August to November, they head back south to Antarctic waters.

The best way to experience Humpback whale migration is from the boat, but you can also spot the whales from the shore. Here is the complete guide on whale watching in Sydney from land and from the ocean.

There is nothing worse than getting seasick and missing all the action. If you suffer from seasickness, don’t forget to take tablets, like Travacalm before you board the cruise. Also check the sea conditions, including wind speed and wave height prior to heading out to see.

While Sydney winters can be surprisingly warm and sunny, it is usually quite windy out in the open ocean, so it is best to bring a warm jacket on a cruise with you. Especially if you prefer sitting at the front of the boat.

While you pull on your winter woollies, don’t forget to put some sunscreen on your face. It may not feel like it when you are on board, but a few hours’ of exposure to the blazing Australian sun can be quite unkind to your skin.