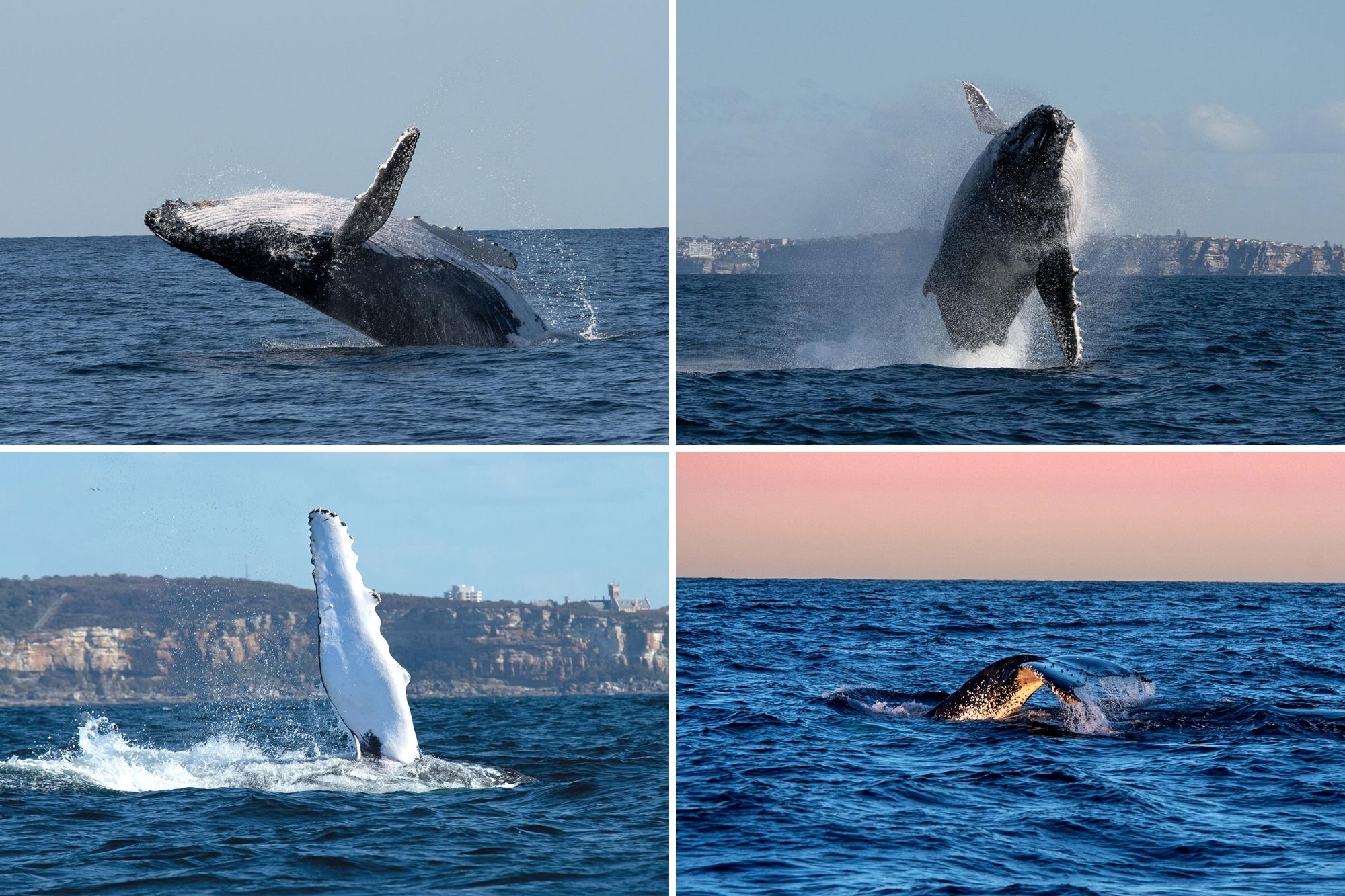 Sydney sprawls over one of the most beautiful natural harbours in the world. With hundreds of kilometres of coastal walks and over 70 sandy beaches framed by the endless expanse of the Pacific Ocean, Sydney is the perfect spot for whale watching.

The whale watching season in Sydney lasts from late May to early November and during this time, thousands of Humpback whales cruise past the city on their epic migration.

I have been watching whales in Sydney for a number of years, starting with university ecology field trips.  Over the years, I have tried and tested most of the whale watching spots along the coast and the majority of whale watching cruises. Here, is the guide to the best whale watching in Sydney based on my experience.

Each year more than 30,000 Humpback whales cruise past Sydney on their 10,000-kilometer migration between their feeding grounds in Antarctica and their breeding grounds in the warm tropical waters of the Great Barrier Reef.

When can you see whales in Sydney

Between May and August, Humpbacks make their way to the tropical waters and between August and November, they travel back to Antarctica. So anytime between late May and early November is a good time for whale watching in Sydney and along the NSW South Coast or North Coast.

What whales can you see in Sydney?

Sydney whale watching season is the season of Humpback whale migration. But there are other whale species you can see off Sydney. Southern Right whales are occasionally seen on whale watching cruises, as well as Common and Bottlenose dolphins.

For a more unusual adventure, you could sail much further into the open ocean on a Pelagic tour (more on this below) where you can see whales that don’t come as close to the shore as the Humpbacks. The open ocean will give you a chance to spot Minke whales, Dwarf Minke whales, False Killer whales, Melon-headed Whales and other rarities.

What can you see when whale watching in Sydney?

As the whales cruise along, they put on quite a show. Humpbacks are often referred to as the acrobats of the ocean because they engage in a number of behaviours that can be observed above the surface. They have quite a number of tricks up their sleeves.

The most dramatic of humpbacks behaviours is the breach, where the whale launches itself into the air, often becoming completely airborne.

The experts are still uncertain what causes 40-tonne whales to leap out of the water, though a number of explanations have been offered. The most widely accepted theory is that a breach is a form of communication. And considering the amount of disturbance a breach causes underwater, it seems like an effective way to get your message across.

Another theory is that whales breach to dislodge parasites from their skin, or even to shed some of the excess blubber that the whales put on during their summer-long feeding buffet in Antarctica.

Whales are curious animals and occasionally they pop their heads out of the water to have a look at what’s happening on the surface. Interestingly, during spy-hopping, whales don’t use their tail flukes to stay upright. Instead, they use their pectoral fins to tread water, much like humans do.

Humpbacks are highly social animals and the experts believe that pec slapping can be used as a flirting technique by female humpbacks. The amorously-inclined females also release a scent, which together with the sound of the pectoral slap sends a message to the nearby males that she is ready for some attention.

On the southern migration, when the females are leading their young calves on their first journey to Antarctica, the mothers teach pectoral slapping to their young.

After every few breaths at the surface, humpbacks take a dive for four to eight minutes. And as the whale goes into a dive it often lifts its tail fluke out of the water. Scientists often use the unique patterns of scars and barnacles on the whales’ flukes to identify individual animals.

Rolling in the water

Another thing humpbacks like to do is to roll around just below the surface. When they do that, their pectoral fins and tail flukes rise above the surface.

Whale watching from land in Sydney

So what are the best locations in Sydney for whale watching? There are a number of vantage points along the coast, many of them lie along spectacular coastal walks.

Below are some of the most popular locations, and you can find the full list of vantage points in Sydney on wild about whales website. You can even download an app to your phone to be up-to-date on the latest whale sightings.

My all-time favourite coastal walk in Sydney is Bundeena to Marley beach track. It follows the dramatic cliffs of the Illawarra coastline and provides endless opportunities for spotting whales. Another good spot is the lookout at Wattamolla.

Whichever spot you choose, spend some time scanning the ocean for the whales’ blow and you will be surprised how close they come to the shore.

Getting there: To reach the coastline of Royal National Park, catch a train to Cronulla and then a ferry to Bundeena. From Bundeena ferry wharf it’s a short walk to the National Park. Alternatively, you could drive to Wattamolla and take a stunning coastal walk to Curracurrong Falls.

Located within the Kamay Botany Bay National Park, Cape Solander is probably the most popular whale-watching spot in Sydney. This is where Sydney’s official whale watching count takes place each year.

There are information boards at the lookout with all kinds of information on humpback whales and their migration. And if you prefer to watch for whales on the go, take the clifftop track to Cape Bailey Lighthouse.

Getting there: Catch a train to Cronulla and then local bus 987 to Kurnell. Then it is a 2.8km scenic walk from the bus stop to the lookout.

The North Head is one of the headlands that mark the boundary between Sydney harbour and the open ocean (the other headland is, unsurprisingly, the South Head). It towers 80 meters above the ocean and you can see the whales coming for miles.

Lying within the North Head Sanctuary, the Fairfax lookout can be reached by the short and easy Fairfax walk through coastal shrubland. The views from the top sweep over the dramatic bluff of the South Head and the endless expanse of the ocean.

Getting there: Catch a ferry to Manly and then bus 135 from Manly Wharf to North Head.

About 50 kilometres further north, Barrenjoey Headland in Kur-rin-gai Chase National Park is home to the northern beaches’ most famous landmark – the Barrenjoey lighthouse.

The walk to the lighthouse along the Smugglers track is a little steep, but once you reach the top, the sweeping views over Palm beach, Central Coast and the Pacific Ocean are more than worth it.

Getting there: Take L90 bus from Wynyard

Lying opposite the North Head, the South Head is the second sentinel guarding the entrance to Sydney Harbor. The headland can be explored along a well-used footpath from Watson Bay.

The best whale watching spot on the headland is the Gap Bluff – the rocky bluff with panoramic views of the North Head, northern coastline and even the city.

Getting there: Take a ferry to Watsons Bay.

While it is great fun to spot whales from the coast, nothing compares to watching a 40-ton animal jump out of the water within a few meters from you. This is why whale watching cruises are one of Sydney’s most popular tourist activities.

The best time to go whale watching in Sydney is during the southern migration when females return to Antarctica with their young calves. If you are lucky, you may witness a mother teaching her calf to breach. The lesson usually consists of a few breaches by the mother followed by a series of breaches by the practicing calf.

For serious enthusiasts, there is something else entirely. Also departing from Rose Bay, Sydney Pelagic & Nature Watching Tours offer full-day adventures to Brown’s mountain – an underwater mound 15 nautical miles off the Sydney coast.

These tours don’t concentrate on the migrating humpbacks but head out further into the open ocean where it is possible to see different species of whales. I have seen Dwarf Minke whales & False killer whales on these pelagic trips as well as Common and Bottlenose dolphins and Sea lions, not to mention a number of species of Albatross and other pelagic birds.

Many of the tour operators often offer good deals on the whale watching cruises. Go Whale Watching, for example, often has a 50% off deal for bookings made via their website.

Another good source of deals for whale watching cruises in Groupon. There are always a few options available during the humpback migration.

Another thing to keep in mind is that if you would like to take more than one cruise with the same company, and I recommend you do that to see a wide range of whales’ behaviour, check with them for the best deal they offer to the returning customers.

Preparing for the whale watching cruise

To get the most out of your time on the ocean, you will want to make sure that you are as comfortable as you can possibly be. And with the unpredictable weather and sea conditions, there are two main things you will need to cover

There is nothing worse than getting seasick and missing all the action. If you suffer from seasickness, don’t forget to take the tablets, like Travacalm before you board the cruise. Also, follow the advice of the fellow Sydney blogger Lyn Lindfield at The Travelling Linfields and check the sea conditions, including wind speed and wave height prior to heading out to see.

While Sydney winters can be surprisingly warm and sunny, it is usually quite windy out in the open ocean, so it is best to bring a warm jacket on a cruise with you. Especially if you prefer sitting at the front of the boat.

While you pull on your winter woollies, don’t forget to put some sunscreen on your face. It may not feel like it when you are on board, but a few hours’ of exposure to the blazing Australian sun can be quite unkind to your skin.

For a truly ‘once in a lifetime’ experience, consider taking a helicopter flight and watching the whales from above. This is the most amazing way to see the whales, simply because you are able to see the entire animal from the air.

For the best deal on the flights, book directly with Blue Sky Helicopters via their website. The one-hour flights start at AUD $500.