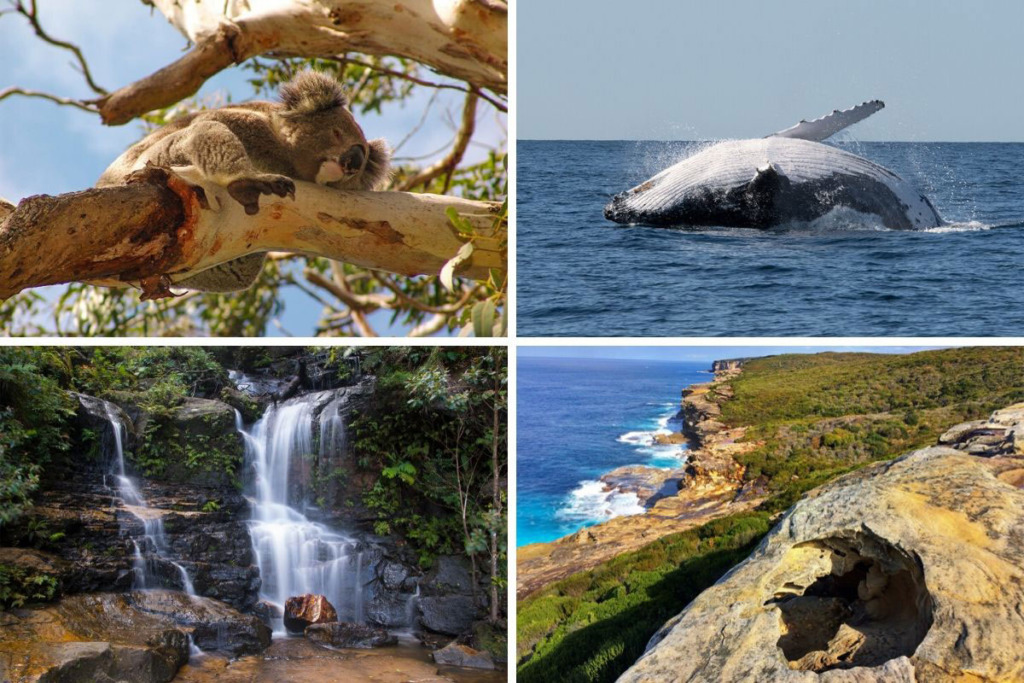 Three months in lockdown during COVID-19 pandemic and we are all itchings for adventures in Sydney. I, for one, desperately missed being out in nature, immersed in epic landscapes and surrounded by sites, smells and sounds of nature.

Luckily, Sydney is surrounded by national parks most of which are within easy reach of the city. In the north, there is Kur-ring-gai Chase and Berowra Waters National parks, In the west, the magnificent Blue Mountains, in the south, the Royal National Park and, in the east, there is the endless expanse of the Pacific Ocean. We are spoilt for choice when it comes to outdoorsy things to do in Sydney.

Here are my top 6 nature adventures in Sydney. If you are looking for things to do to stave off the isolation blues, here is some inspiration.

Each year 35,000 Humpback whales undertake an epic return journey between Antarctica and the Great Barrier Reef and they travel past Sydney in each direction. Taking place between June and October, Humpback migration is the most extraordinary wildlife spectacle that happens right on Sydney’s doorstep.

Whale watching tourism industry is strictly regulated in Australia to minimize disturbance to the animals, but whales often seem to be as curious about us as we are about them. While the boats are not allowed to approach the whales closer than within 30 meters, whales often approach the boats themselves. And if you happen to come across a group of boisterous juveniles you may be treated to aquatic acrobatics show that you won’t be likely to forget.

Only a 1.5hr drive from the city center, the Blue Mountains can make you feel like you are in a different world, and, perhaps, a different time. You can put your body through the paces on steep, rugged trails from the dramatic cliff tops to the lush forest on the bottom of the valleys. Or you can meander along the flatter trails, like Prince Henry Cliff Walk and let yourself be engulfed by the vastness of the landscape surrounding you. Whichever trail you take, it will be one of the best hikes in Sydney.

Here are some of the most adventurous day-hikes in the Blue Mountains:

There is plenty of wildlife in the Blue Mountains, so keep your eyes peeled for the colourful parrots, lyrebirds, kookaburras and if you are in the lower mountains, kangaroos.

Sydney has a spectacular coastline and the best way to enjoy it is to take a coastal walk. For something closer to the city, do the 10km Manly to Spit track. It gets quite busy during the day, so the best time to start this track would be about 7.30-8 am.

For something a little wilder, head to Royal National Park, home to some of Sydney’s best hiking trails. There are many walking tracks in Royal, but some of the most stunning ones are those that run along the coastline. The entire coastline of Royal can be explored on a two-day Coast Track. But if you don’t have 2 days for a hike, you take walk smaller sections of it and see the spectacular coastal scenery on an easy day trip.

Here are some of the most beautiful parts of the coastline:

Not only is Sydney surrounded by National Parks, but there are also plenty of large parks within the city where you can spot some of the wild creatures we share our city with.

Even if you are not a keen birdwatcher, spotting the stunning black cockatoos or the incredibly long-legged stilts and avocets is unlikely to leave you unimpressed. Centennial Park is a great place to see the black cockatoos, pelicans, black swans and a huge variety of other native Australia birds. The Bicentennial Park is home to one of Sydney’s last remaining patches of mangrove habitat and to a breeding colony of black-winged stilts.

Further west, the Australian Botanic Gardens at Mt Annan is one of Sydney’s best-kept secrets as far as birdwatching spots go. It also happens to be the best place in Sydney for spotting Eastern Grey kangaroos as well as wallabies.

Or if you would like to get up-close and personal with some of the Australian native mammas, like wombats and kangaroos, take this amazing day tour to Kangaroo Valley and spend an afternoon literally walking with wombats.

Sydney’s islands are something I discovered only recently. There are of course the small islands in Sydney Harbour, like Cockatoo Island, Fort Dennison and Shark Island, but they mostly function as tourist destinations. The islands I am talking about are the small offshore communities where people live year-round. These communities are like modern-day fishing villages where no one fishes.

If a day trip doesn’t satisfy your thirst for adventures in Sydney, make a weekend of it and spend a night camping in the bush. You can even camp in Sydney, on Cockatoo Island or at the Glamping site in Lane Cove National Park, but for a wilder adventure and to get away from it all, I prefer the campsites in the surrounding National Parks.

Here are some of my favorite campsites near Sydney: