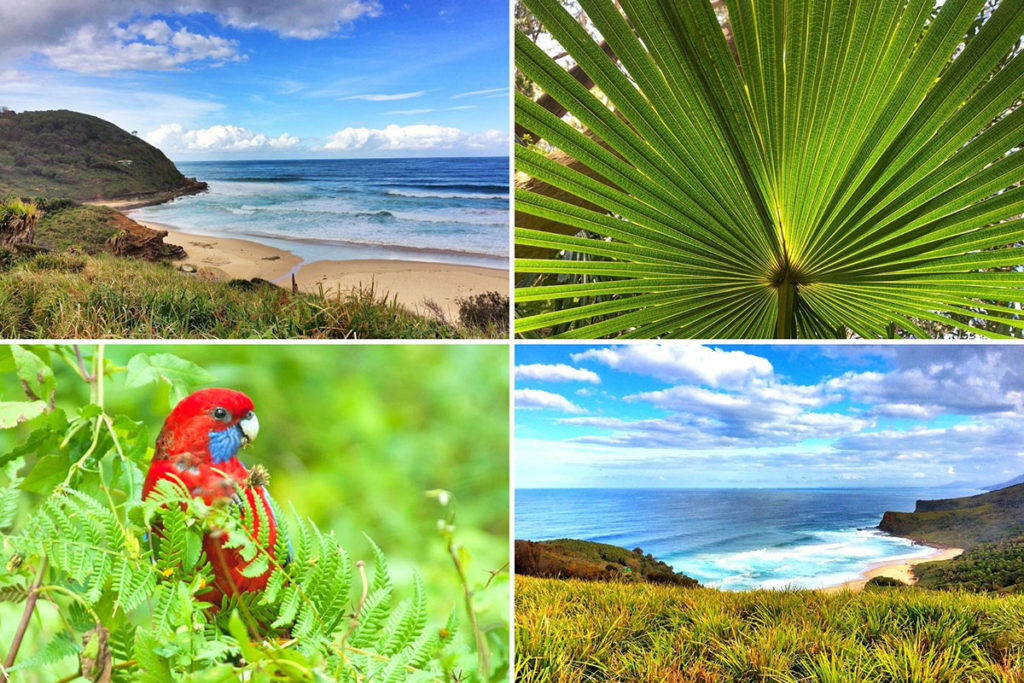 Palm Jungle Loop Track is one of the more adventurous coastal walks in Royal National Park. It covers about a quarter of the 26-kilometer Coast Track and returns via a fire trail through red gum forest. Only an hour away from the city centre, Palm Jungle track offers the best of all worlds: towering cliffs of the rugged coastline, eucalypt forest, rainforest gullies, beaches, grasslands and even a palm jungle!

I took this track for a Saturday adventure combining a coastal walk with a bit of bird watching. And bird watching along the Cliff Track turned out to be superb.

How to get to Palm Jungle Loop Track

Drive: Palm Jungle Loop Track starts at Otford Lookout. It takes just over an hour to drive to Otford Lookout from the city centre along Princess Hwy/A1. Here is the location on Google Maps.

Train: Catch a train from Central to Otford, then walk up to Lady Wakehurst Drive. Cross the road and walk about 500 meters north, following the signs to Royal National Park and Coast Track. There is another lookout to the south, but that’s not the one you want. The walk from the station via Beaumont Road Fire trail is quite steep, so the adventure starts as soon as you get off the train.

The trail starts at the beginning of Cliff Track at Otford Lookout and immediately ducks into the tall eucalypt forest. It meanders along the cliff tops over a narrow and rocky forest path. Most of the time you can glimpse the vivid blue of the ocean between the gnarly trunks of Red Gums. In winter, the giant flowers of Gymea Lily erupt from their grassy base and shoot towards the crowns of the gum trees.

This is a beautiful part of the walk and a good spot for bird watching if you can take your eyes off the trail – the rockier parts of the track take some navigating and you will want to look where you put your feet.

Soon you pass sign posted Werrong beach turn off. This is not the turn off you want. Continue following the Cliff Track for another 1.9 km until you reach signposted turn off to Palm Jungle & Burning Palms Beach.

After about a kilometre, the trail widens into a soft and sandy fire trail that runs all the way to Garawarra Farm. Keep an eye out for Eastern spinebills, Golden whistlers, Eastern yellow robins, Crimson rosellas and Superb fairy wrens. If you are visiting in late winter-early spring, male Superb fairy wrens are particularly … well, superb in their breeding plumage.

The bird you’ll hear most often on this trail – Eastern whipbird is harder to see, as it keeps concealed among leaf litter and thick vegetation. If you do decide to look for it, look for an olive-colored bird with white cheeks and black crest.

Once you take the turn off to Palm Jungle, the track narrows and starts to descend into the cooler and wetter rainforest as it enters the Palm Jungle – a unique forest of cabbage tree palms and tropical plants. Cabbage tree palms like growing in moist gullies where nutrient-rich soils are fed by the water draining off the coastal escarpment. Here the trail twists up, down and around, over lichen-covered boulders, through rainforest gullies and across small creeks.

Now and then there are gaps in the canopy that allow you glimpses of the underside of the cliff that you are descending from.

In the past, I have seen Superb Lyrebirds in Palm Jungle and I was keen to try to find them again.  However, this part of the trail is so steep and narrow that it forces you to keep your eyes on the ground, rather than on the surrounding forest.

You can still listen out for the scraping sounds in the bush, of course, but as hard as I tried, all I got was a Green catbird that swiftly flew across the path and disappeared in the dense undergrowth.

At one point the trail climbed onto the top of the cliff again and the forest was briefly replaced by shrub. Immediately bird chirping filled the air. Eastern spinebills, New Holland honeyeaters and Little wattlebirds hopped erratically from branch to branch, probably as excited about the sunshine as I was.

After about an hour, the forest suddenly ends and the trail bursts out onto the open grassland that stretches out all the way to the ocean.  An elevated walkway leads across the headland towards Burning Palms Beach.

The head-spinning change of scenery from closed forest to sweeping coastal vistas makes you feel like have been transported to a different world. On the right sandstone cliffs rise out of the brilliantly blue ocean and on the left, forest-covered escarpment towers over the grassland. Burning Palms beach is virtually deserted on a cool winter day.

You can also take an optional detour to the Figure 8 rock pool from this track, one of the prettiest natural rock pools in Sydney.

Burning Palms beach is home to one of Royal’s shack communities, like the one at Bulgo Beach. The first shacks were built by the miners from the nearby mines in Helensburgh during the Depression in 1930s. The struggling miners built these ramshackle tin sheds and survived on fish, rabbits and home-grown vegetables.

The shacks were passed down in the families have now become heritage-listed weekenders. Although, the shack settlements remained almost unchanged since the 1930s. Since Burning Palms can only be reached on foot, any construction materials have to be carried in along the steep trails. There is no mains electricity, but many shacks now have solar panels and provide their inhabitants with basic creature comforts.

Despite their bare bones construction, the shacks are quite pretty, most of them painted in different colors. It’s worth taking some time to check out a few shacks while you are at the beach.

After relaxing on the beach, brace yourself for the most strenuous part of the track – a pretty steep ascent to the top of the escarpment. The trail up the grassy slope can muddy and slippery after the rains, which adds an extra challenge. Though you’ll be lucky going up that trail, I wouldn’t want to walk downhill here on a muddy day.

As you climb higher, your efforts are rewarded by some more dramatic views of the Burning Palms beach and the surrounding headlands. Eventually, the grassy slope gives way to the rainforest and wet eucalypt forest towards the top of the escarpment and soon the gate of the Garawarra Farm marks the end of the assent.

From the farm, 5.5km fire trail leads back to Otford. It is a pleasant change from all the ascents and descents as it is almost completely flat at about 250 meters above the sea. And while you know that the cliff edge is just off to your left, you can neither see nor hear it from the trail.

Yet again you are transported to a different world, one of the tall eucalypt trees, primeval ferns and chirping birds. It is an incredibly peaceful walk through a typical Australian bush.

The birdlife along the trail was similar to what I encountered at the start of the track, though not as active late in the afternoon. I picked up a few more Eastern yellow robins and Eastern spinebills, a couple of Laughing kookaburras and a pair of Australian ravens.

I finished the track back at Otford lookout in the rapidly disappearing daylight and within half an hour I was speeding away on a Sydney-bound train nursing some sore muscles, covered in mud halfway up my legs, feeling more content than I had in weeks.

If you happen to finish the track before 4pm, head to Otford Pantry cafe (22 Lady Wakehurst Drive) for a cuppa and a snak to reward yourself for the adventurous walk.