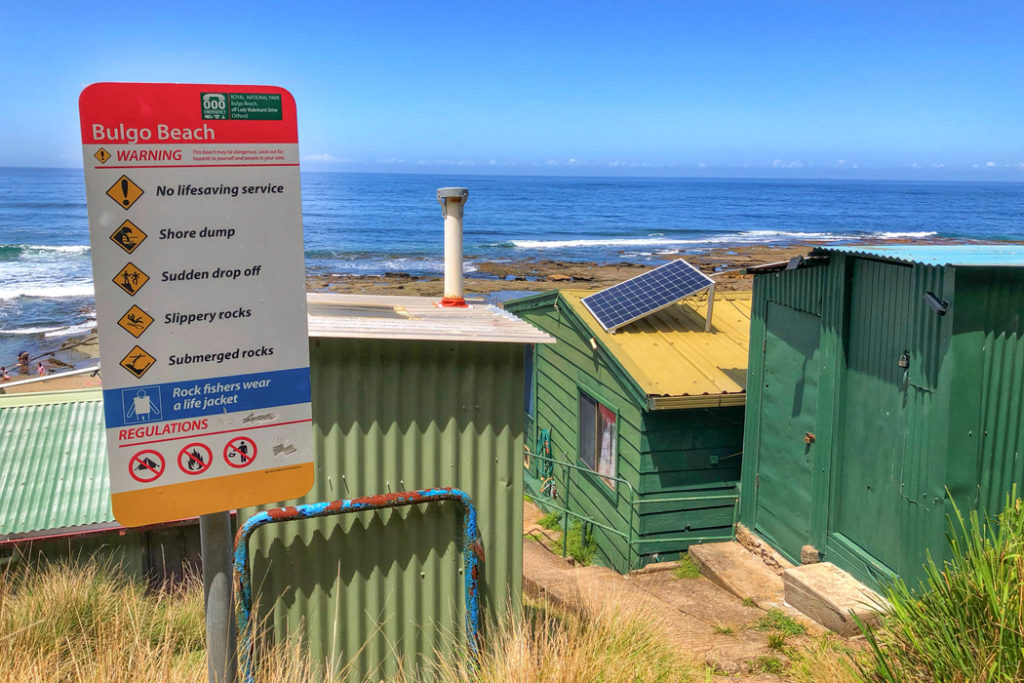 Bulgo beach is not technically in Royal National Park, but rather on the southern edge of it (location on Google Maps). It is unusual in that it is home to shack village – an aggregation of the Heritage-listed rustic fishing huts, some of which are still occupied while others the owners visit only occasionally. It is definitely worth a 20-minute climb down the cliff to walk along Bulgo beach among these unique huts and let yourself be transported to the 1920s to a much simpler lifestyle.

As an added bonus, because Bulgo beach is not inside the National Park, you can take your dog for a swim with you. It’s not one of the designated dog-friendly beaches in Sydney, but no one is going to stop you.

How to get to Bulgo beach

Bulgo beach is located in Otford on the fringe of Royal National Park. You can either drive to Otford Lookout or catch a train to Otford and walk about 1 kilometre to the lookout. You get the first glimpse of the tin shacks on the beach from the lookout. From the top of the escarpment, the shack village appears to cling to the bottom of the cliff separated from the surf by a 300 m long narrow band of coarse sand.

The beach can be reached by a steep but relatively short trail. To get to the start of the trail from Otford lookout, walk 500 meters south towards another unnamed lookout on Lady Wakehurst Drive, across the road from Otford Pantry Cafe. The trail ducks downhill from the roadside walk just before you reach the lookout.

Like most coastal trails in Royal National Park, Bulgo trail is very picturesque. After the initial steep descent, it levels out and heads gently downhill along Bulgo Track. After about 250 meters, you come to an unsignposted intersection with Bulgo North Branch Track running downhill. Follow this trail and keep left all the way down to the beach. It’s fairly steep, but nothing too serious on the way down. It’s much harder work on the way up!

When the forest opens up, you get stunning views of the ocean and can get your first glimpses of the shacks on the beach.

As you walk down Bulgo beach track, you start to pick up signs that you are on your way to a fishing community. The fishy smell is the first giveaway. Some discarded fishing equipment also points towards a fishing lifestyle. This trail is the only way to reach the beach, so it is heavily used by the residents.

The trail emerges right in the middle of the shack village. One look at the shacks is enough to realise how old this village is. Most of these shacks date back to 1930s, the time of Depression when the striking coal miners from the nearby pits in Helensburgh moved to the beach where they could live on fish, rabbits and home-grown vegetables. If 1930s sounds historic, some sources suggest that the first shacks were built as early as 1890s.

Or you can listen to “shackies’” stories here.

Today there are 53 shacks on Bulgo beach and together with shack or cabin communities at Little Garie, Era and Burning Palms beaches, it is one of the largest remaining groups of recreational cabins in NSW. These shacks are quite well equipped in comparison to some tin shack communities in the state, like the Tin City in Anna Bay that has absolutely no amenities. Most of Bulgo beach shacks have solar panels so the residents can enjoy some creature comforts.

You can go for a walk along the rock shelf to the south of the shack village. There are a couple more shacks along that way clinging to the rocks above the rock shelf.

Bulgo beach is not the best swimming spot. The rock shelf that extends from the beach makes the bottom too rocky and slippery and it drops quite sharply not far from the shore. The sand ab Bulgo is quite coarse as well, in many places turning into pebbles.

You can splash around at the beach just north of the shack village. Between the last shacks and the rocky headland. I’ve never actually seen anyone swim at that beach, but locals often sunbathe there and enter the water to cool off.

On my last visit to this beach, this adorable creature trotted up to me and very expressively let me know she was looking for a playmate. She even found a disintegrated tennis ball and placed it at my feet. So we played a few rounds of fetch.

At the southern end of the village, there is a tidal rock pool that it protected from the surf by a retainer wall. It is not visible during high tide, but if you find yourself on the beach when the tide is low, you’ll have an opportunity to dip your toes or go for a swim during the warmer months.

Like everything else at Bulgo beach, the pool has a rich history. It was blasted from the 100-kilometer wide rock platform that fringes the beach, in the 1930 as a safe place for local kids to swim and to store the day’s catch.

The trail to Bulgo beach only takes 20-30 minutes (a bit longer on the way back up), so you could easily combine your visit to Bulgo beach with some exploration of Royal National Park.

If you are keen for another climb to a beach, check out Werrong (nudist) beach (check this post for details about Werrong Beach track). Or you could take a hike through beautiful red gum forest along the Cliff Track between Otford lookout and Garawarra Farm. This track starts as a narrow rocky forest path, but after a couple of kilometres it widens into a soft and largely flat fire trail. This area is perfect for bird watching and wildflowers in late winter-early spring.

Once you are done exploring, head to Otford Pantry café (22 Lady Wakehurst Drive) for a hot cuppa or a cold drink if you are visiting on a weekend. Its located right across the road from the start of the Bulgo beach trail and sells a selection of pies, sandwiches, pastries and tarts.