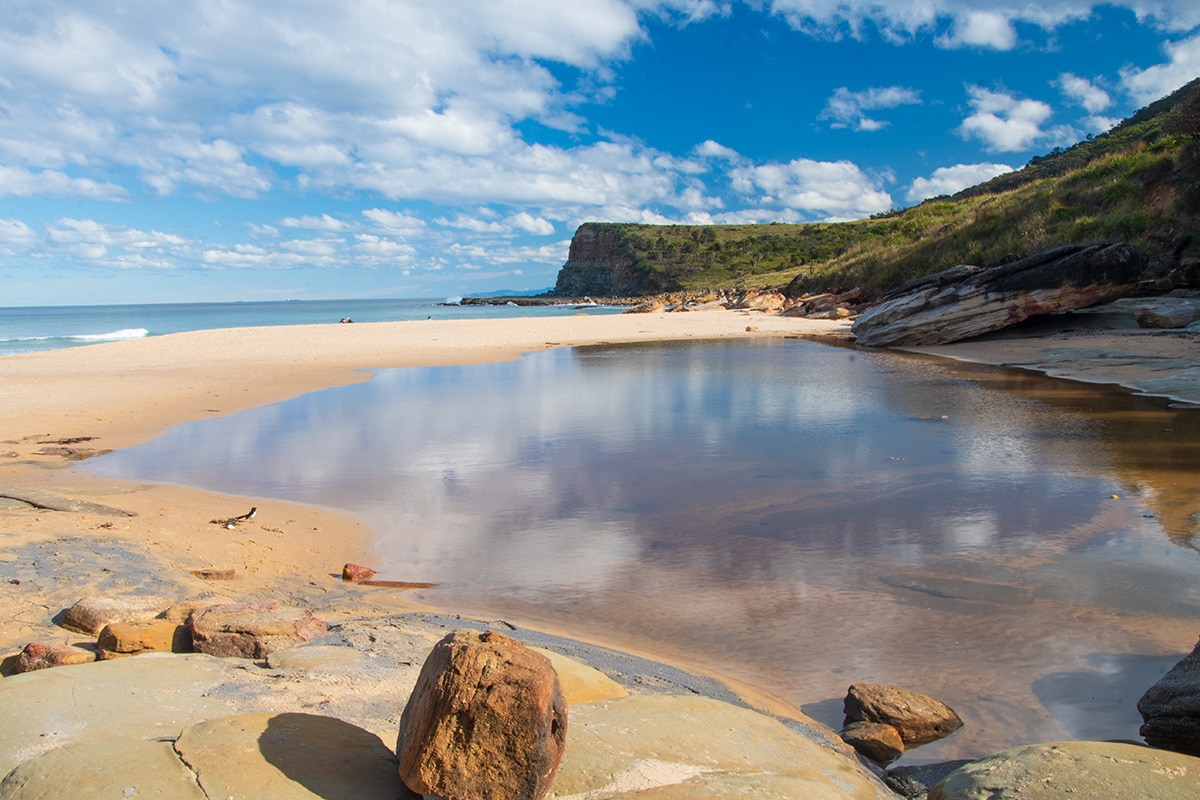 Burning Palms beach is one of the prettiest beaches in Royal National Park. It can be accessed only on foot by several different trails: Palm Jungle Loop trail from Otford (convenient if you are travelling by train), Garie Beach to Burning Palms trail, and the quickest, but steepest walk from Garawarra Farm carpark via the Burgh Ridge Track. This guide introduces the track from Garawarra Farm carpark.

Garawarra Farm used to be one of only two private properties in the Garawarra area. It was taken back by the state in 1930, although it remained leased until 1971. Since then, the farm has not been operational. So don’t expect to find an actual farm at Garawarra Farm carpark.

The carpark is just a large clearing with bathrooms and an information board that serves as the starting point for several walks, including Burning Palms Beach loop and Figure 8 Pools.

Mobile reception is quite patchy at the car park and virtually nonexistent on the rest of the walk.

The trail at a glance:

The trail to Burning Palms Beach heads downhill through atmospheric wet eucalypt forest, and soon you start getting glimpses of the ocean, which at this stage appears to be above the level of the trail. It’s a super interesting optical illusion.

After the initial gentle descent, the trail gets quite steep, enough to give you jelly legs by the time you reach the beach. But the views of the Burning Palms beach and the headlands of the Illawarra coast from the trail are stunning and will easily keep your mind off your legs.

You also start getting first glimpses of the colourful beach shacks clinging to the grassy slope near the beach.

About halfway along, you emerge from the forest on the open grassy slope and come to a signposted fork in the trail. Going straight ahead, the trail joins the Coast Track and follows it to Burning Palms beach.

The trail that veers to the left also joins the Coast Track but leads in the opposite direction – towards Era Beach. This is a good trail for spotting Swamp Wallabies early in the morning and late in the afternoon.

You can follow the elevated metal boardwalk towards Era Beach for 10-15 minutes until you reach the headland at Semi Detached Point. The shrubs and the grassy clearing here is where you would see the wallabies at the right times of the day. The animals are quite habituated to people here and are not too bothered by people walking by. It’s a good place to watch them for some time.

If you are not too interested in the wallabies, walk straight ahead until you reach the intersection with the Coast Track.

Once you join the Coast Track, the trail follows the signs to ‘Burning Palms’, winding down the slope past the rustic beach shacks. There are about 20 shacks remain at Burning Palms beach. And another 180 or so on Bulgo, Era, and Little Garie beaches.

Most of these shacks date back to the 1930s, the time of the Depression when the striking coal miners from the nearby pits in Helensburgh moved to the beach where they could live on fish, rabbits and home-grown vegetables. If the 1930s sounds historical, some sources suggest that the first shacks were built as early as the 1890s.

The shacks were built by private citizens who had to not only buy all the materials but also carry them down the track you just walked.

Unlike the Bulgo beach shack community, where the huts are clustered together, at Burning Palms, they are more spread out and surrounded by vegetation which makes them even more scenic.

Such shack communities were once common along NSW coast, however most have been demolished as part of coastal development. The shacks of Royal National Park are the largest remaining coastal shack communities in Australia. Another community can be found in Tin City in Port Stephens.

Once you pass the cabins, the trail becomes a metal walkway that soon changes to a narrow bush track until it emerges on the beach.

Burning Palms beach is an idyllic 500-meter-long stretch that can only be reached on foot. This means the beach is never crowded, even though it lies on the way to the Instagram sensation – the Figure 8 Pool. The pools can be accessed only at low tide, so if you plan to visit them, check the tide times on the National Parks website. Or you might like to join an organized tour to Figure 8 Pool.

Like most beaches in Royal National Park, Burning Palms is a surfing beach. But unlike other beaches, it has its own Life Saving Surf Club that was founded in 1939. The volunteer life guards patrol Burning Palms beach from September to April each year on Sundays and Public Holidays. And on Saturdays during December and January.

The beach is considered fairly treacherous with strong rip currents. So if you are visiting when the beach is not patrolled, it’s best to take it easy and not venture too far.

Even if you are not swimming, Burning Palms beach is a gorgeous setting to spend some time in. The rocky platforms at the ends of the beach provide comfortable purches and photogenic viewpoints.

Once you are relaxed enough to start the climb back to the top of the escarpment, retrace your steps along the Coast Track and Burgh Ridge trail.