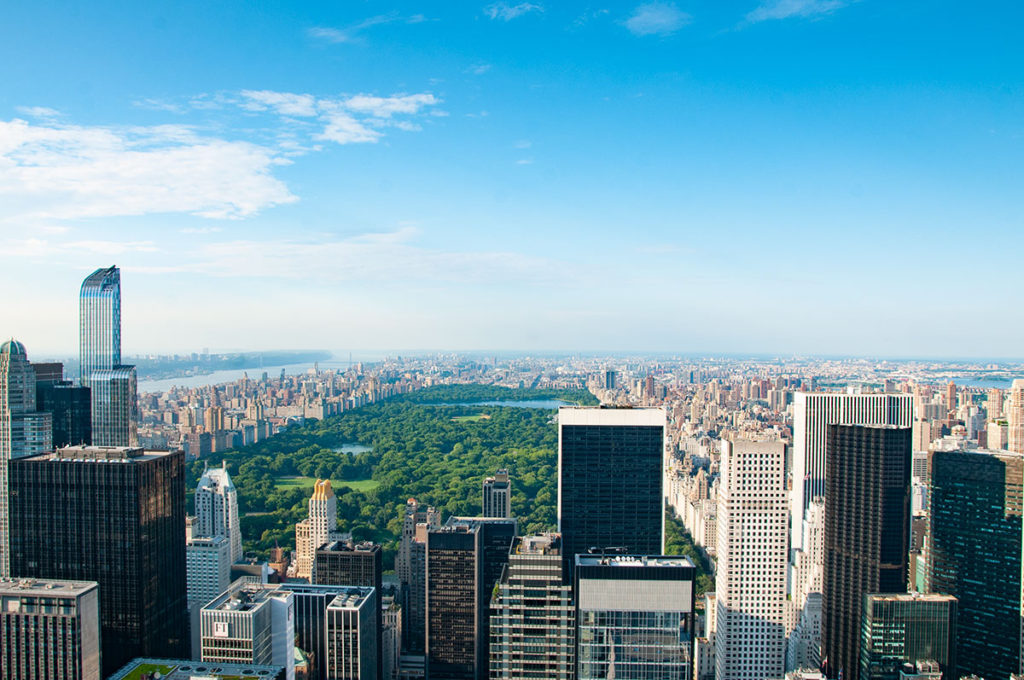 I am not much a of city traveller – I prefer wild landscapes for my travels, but there are cities in the world that everyone has to visit at least once. And New York is at the top of that list. So when I had to fly via New York to a friend’s wedding in Costa Rica, I extended my layover and spent two days exploring the world’s most famous city.

My ‘Two days in New York on a budget’ itinerary included an eclectic mix of movie-nut / wildlife nerd / first-time in New York kind of sites. There is something for everyone in New York. For me, this was a low-budget detour from my month-long Costa Rica adventure so I didn’t visit any bars or expensive restaurants or seen any shows on Broadway. Instead, I concentrated on New York’s underrated attractions and visited Niel DeGrasse Tyson’s Planetarium at the Natural History Museum to see a meteor, a browsed antique maps and books at Argosy Bookshop and watched fireflies in Central Park, in between visiting the iconic landmarks.

New York has some of the finest hotels in the world. And I don’t mean just the super-luxurious 5-star establishments, but also some really quirky and unique boutique hotels like the High Line Hotel in Chelsea for example, but these places are quite pricey. And my mission on this trip was to keep the costs down.

I found a lovely room on Airbnb in Williamsburg, within a 5-minute walk from Marcy Avenue train station which made it easy to travel to Manhattan each day. Here are some practical tips for finding the best Airbnb anywhere in the world – it’s a skill every traveller should master.

If you are in New York on a limited budget, the one thing you need to do is work out the city’s subway system. It is confusing and inconsistent (different on weekends and weekdays) so it takes a bit of brainpower to make sense of it. But once you do, it will take care of your transportation costs.

Another major expense, is food, of course. To manage the cost of your meals, you’d need to plan where to eat in New York. There are plenty of inexpensive options, and I am not talking about fast food. You’ll just need to do a little bit of forward planning.

Another cost-saving activity is, of course, walking. I walked across Manhattan for two days and it gave me an opportunity to feel the rhythm of the city, to watch people going about their days and to feel like an explorer rather than a tourist.

Since I only had a couple of days, I decided to spend one day exploring Downtown Manhattan and the other day head to Midtown.

The first order of business was to experience sailing towards Manhattan with the Statue of Liberty welcoming you to the land of freedom and opportunity. The best way to see the Statue of Liberty for free is by taking the public ferry to Staten Island and back. The Whitehall Ferry Terminal (on the Manhattan side) is across the street from the South Ferry train station.

The terminal is huge and purpetually busy, but once you are on the ferry, most locals are not keen on sightseeing, so they take the seats inside the cabin, leaving the outdoors part of the ferry to the tourists. I do the same riding the ferries in Sydney :)

Ferries leave quite often and the ride takes about 25 min each way. The wildlife nerd in me was happy to see a Common tern and a Herring gull while waiting for the ferry.

The ferry ride is a lot of fun in good weather and you get fantastic views of Manhattan’s skyline and of the Statue of Liberty. Thanks to Hollywood, most people in the world are familiar with New York’s iconic landmarks from movies and TV shows. The Statue of Liberty probably features in a few hundred films, but to me, it is the site where an FBI agent, Olivia Dunnum crossed between parallel universes in J.J. Abram’s Fringe TV show.

Funny how places can seem so familiar when you are looking at them for the first time. Was the Statue of Liberty exactly as I imagined it? Mostly yes, but perhaps a little smaller, a little less imposing.

Once the ferry returned me to Manhattan, I took a stroll through downtown, past the Battery Park, the Charging Bull and Wall Street, on towards the 9/11 Tribute Museum. I didn’t visit the museum, but my mind was flooded by the terrifying images of the attack and its aftermath. Those images, I am sure, left permanent scars on the psyche of billions of people.

Once I got a little tired of walking, I jumped on a bus heading uptown and it took me within meters of my next destination – The Evolution Store (120 Spring Street). It’s a curiosity store that sells a variety of nature/science/art… well, curiosities. It’s what you’d imagine the library of a Victorian explorer to look like – gruesome and fascinating at the same time.

In the afternoon, I headed to Little Italy and Chinatown. Little Italy in particular, was very busy, buzzing with bars, restaurants and souvenir shops. The aromas wafting in from some of these restaurants were absolutely mouth-watering. So after an obligatory purchase of a New York souvenir in the form of a canvas print, I turned my attention to dinner options. When in Rome, do like the Romans, so once I spotted my namesake restaurant, Margherita NYC, I figured pizza was a theme-appropriate choice.

The one event I attended in New York in my two days in the city was Hunger Games Exhibition at Discovery Times Square. I came across it while I was still in Sydney and it luckily coincided with my trip.

I spent my morning wandering from set to set from the Tribute Train to President Snow’s office, to Hob – the black market of District 12, to the Hall of Justice and District 13, gawking at Katniss’ spectacular dresses and various bits and pieces from the film set.

From the world of Panem, I emerged into the overwhelming brilliance of Times Square. This place looks like the national finals in the heavyweight advertisement. Dozens of giant digital screens and billboards compete with each other for pedestrians’ attention. I wouldn’t be surprised if Times Square was visible from space. This is the best place to appreciate how New York is a city that never sleeps

For any self-proclaimed nerd visiting New York for the first time, a visit to the American Museum of Natural History is a must. So, from Times Square I caught the train to 81st Street and headed to the museum.

The museum is chock-a-block full of interesting stuff, you could write an entire post about it. Some of the highlights are a massive iron Willamette Meteorite (it flew through space to get here!) and a skeleton of Anatotitan – a Duck-billed Dinosaur (so Australian platypus is not all that original after all).

But what’s really cool at the museum is Haiden Planetarium headed by Niel deGrasse Tyson of ‘Pluto had it coming’ fame. During my visit, the planetarium was showing the Dark Universe. Can you imagine watching a supernova explode above your head, hear it in Dolby surround sound and feel your chair vibrate with the power of it? It is a mind-blowingly immersive experience.

From supernovas and dinosaurs, it is back to the movie magic on the streets of New York. The upper west side for me is the world of Gossip Girl. I have to admit, I’m not a huge fan of the show, but I once spent a year at a remote wildlife sanctuary in the Australian Outback where we didn’t have TV reception. At some point, someone brought a hard drive full of tv shows and I spent weeks watching all seasons of Gossip Girl. And the association with the Upper west side stuck.

From the museum, I strolled across Central Park to Argosy Bookshop (116 E 59th St). This family-owned shop stocks en enormous collection of antiquarian and out-of-print items: books, maps and art prints. It is a pleasant escape from the buzzing streets of the city, almost like a museum in its own right.

Staying with the book theme I headed to midtown and to New York Public Library, a building that’s in my mind is associated with the post-apocalyptic film – The Day After Tomorrow.

The nearby Rockefeller Centre was my next iconic New York destination. Not the building itself, but the observation deck – Top of the Rock located on the 70th floor of the tower. It is a little pricey ($38) but the views of Central Park and Manhattan are absolutely worth it.

A quick tip: To avoid the queues, get your tickets online (here) beforehand.

This is going to sound strange, but I was looking forward to visiting Central Park more than many other spots in New York. I wasn’t staying in the states to do any wildlife watching in North America and Central Park was my only chance to spot any critters from this continent.

Of course a city park, even one as large as Central Park is going to offer pretty limited wildlife spotting chances. But beggars can’t be choosers.

Squirrels seem to have adapted best to living in urban parks around the world and not surprisingly, I had no trouble finding Eastern grey squirrels in Central Park.

While I was watching squirrels, an American robin flew in to grab an insect snack. Down by the pretty duck ponds there were a few Mallard ducks, also common residents in urban parks worldwide and a pair of Red-eared Sliders, that are not native to North America and must’ve been introduced in the park by local residents, like they have been in many other parks.

I was half the world away from my childhood playground in Kuzminsky park in Moscow, yet I was looking at the same ducks and turtles all over again.

An unexpected surprise came after the sun dipped below the horizon. Hundreds of fireflies emerged in the park and filled the dark forest with their pulsating bioluminescence. That was the perfect ending to my two days in New York.