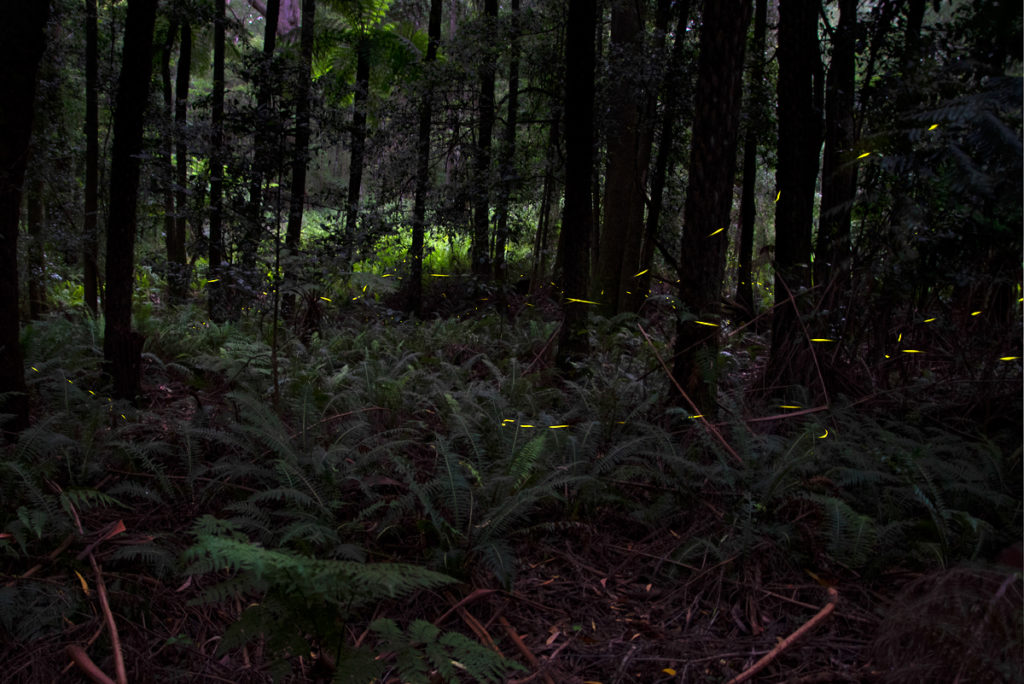 Fireflies in Australia? You bet! Better yet, you can see fireflies in the Blue Mountains, only a 2-hr drive from Sydney. But only in a brief window of time – just before Christmas.

Our pre-Christmas getaway to the Blue Mountains coincided with a very special and rare event – the emergence of fireflies. I didn’t even know fireflies occurred in Australia until Antoine, our guide on the glow worm tour a few months back let me in on that fabulous secret. Luckily, Antoine was free on the evening of our Blue Mountains getaway and we booked our Firefly adventure with him.

In this post hide
1. Drive to Mount Wilson
2. When can you see fireflies at Mt Wilson?
3. Cathedral of ferns
4. Fireflies Magic
5. How to get to Cathedral Reserve
6. Where to stay near Cathedral Reserve
7. More on Bioluminescent Creatures in Blue Mountains

We set off from Leura about 1.5hrs before sunset and after a quick stop at Evans Lookout headed for the scenic Bells Line of Road.

As we drove, the sky turned moody with thick rainy clouds and the wind picked up as the temperature kept dropping. But the mountain scenery we were driving through was absolutely spectacular. We could still see the massive charred scars left on the forest by the 2019 fires, but signs of regeneration were everywhere.

In the Blue Mountains, the place to see fireflies is the picturesque village of Mount Wilson. We decided on the Cathedral Reserve because someone had suggested the Cathedral of Ferns as the best place to look for fireflies.

The tiny village of Mount Wilson is one of the most scenic settlements in the Blue Mountains. Its fairytale-like tree-lined roads alone are worth a trip to this part of the mountains.

When can you see fireflies at Mt Wilson?

The trick with fireflies in Australia is that they are only active for a few weeks in the year – the last three weeks of December. Fireflies are very short-lived creatures. In their adult form as flying beetles, they only live for a few days. And the only purpose of their adult life is to reproduce. But they are picky romantics. They are active only when the conditions are just right: it’s warm, humid but not raining, and not windy.

We were lucky with the humidity side of things – it’s been raining for a couple of weeks and the day of our visit was the first day with a clear sky. Thankfully, the wind also settled down by the time we reached Mount Wilson. But the temperature was wintery – about 16 degrees and falling, instead of the high 20s preferred by the fireflies.

So we decided to manage our expectations and be prepared to not see any fireflies. That’s the nature of nature adventures – sometimes you win, sometimes you lose. The Cathedral of Ferns is a good-looking patch of rainforest and a picturesque spot to explore even without the fireflies.

We arrived at Cathedral Reserve before sunset, parked at the picnic area and headed into Cathedral of Ferns. This beautiful patch of undisputed rainforest is aptly named. It is filled with massive fern trees nestled under a canopy of giant and ancient rainforest trees. Some of these trees are 50 meters high. One particularly massive tree was hit by lightning in 2008 and didn’t survive the ordeal, but its massive base is indicative of the tree’s former size.

We walked through the forest until we found a nice log to sit on and I set up my camera and took some landscape shots in hopes that fireflies will oblige and fly in front of the camera later on. And then we waited. And waited. And there was not a flicker of light in the darkening forest.

The fireflies are usually active during the twilight hours for about 45 minutes. By the time it got completely dark, we accepted defeat and headed back to the car. It was cold enough for me to wear a puffer jacket. Definitely not firefly weather.

As we walked, Antoine had a hunch that the Cathedral Creek running parallel to the road would be a better place to look for fireflies. It’s humid and the grass is higher by the side of the creek, so the insects should like the shelter it provides.

We walked onto the road and within a couple of minutes we spotted a blinking light in the forest. A firefly! And another one. And then two more.

We carefully made our way into the forest between the road and the creek and before long there were a dozen fireflies floating around us. I quickly set up the camera and started firing off 30-second exposures trying to catch as many pulsating lights moving across the camera’s field of view as I could.

But while there was quite a bit of activity, most of it seemed to be happening in the different direction. The idea with photographing fireflies is to keep the camera pointing at the same spot and keep taking photos of passing fireflies and merge these images later into a single frame. But after the initial burst of activity in front of my camera, fireflies seemed to be everywhere but where I was waiting for them.

So I moved again. And took a few frames. And once activity died off, I moved again. Eventually it became too dark for the camera to take a decent shot of the background and my images started to look like yellow abstracts on black background.

Regardless of my photographic experiments, being surrounded by this mesmerizing natural spectacle was a very special experience. We noticed that while some flashing lights sailed through the air, others seemed to stay in the grass. I later learned that it is the males that fly, producing the light to show off to the females waiting on the ground. Once a female sees someone she likes, she begins producing the light as a way of accepting the invitation.

The activity started to fizzle out around 9.30pm, just an hour and a bit after the sunset. Fewer and fewer fireflies were continuing on their quest for love. Amazingly, fireflies don’t even feed during their short adulthood. They don’t even have the mouth parts. So once that hour of romance is over, they don’t have much to do apart from waiting for the next night that will hopefully bring favorable conditions.

According to whatever information is available on the Blue Mountains fireflies (yes, that’s what they are called!), they shouldn’t have been out on this cold night at all. But they had a tough run with weather conditions for the past two years. In December 2019, Blue Mountains were on fire and 2020’s La Niña brought two weeks of rains. Tonight’s show could have been an act of desperation by the beetles that need to leave progeny before their short lives are over.

So if you do head to the Blue Mountains to look for fireflies, make sure to keep disturbance to a minimum. Fireflies don’t like bright lights and a lot of movement. Both of these things would lead to decreased activity. So pick a spot, turn off your lights and enjoy the show.

By the way, if you are as keen as I am on bioluminescent insects, check out my guide to finding fireflies and glow worms in the Blue Mountains.

How to get to Cathedral Reserve

Cathedral Reserve is located on Mount Irvin Road near the picturesque village of Mount Wilson about 100 km from Sydney. There is no public transport in this part of the Blue Mountains so the only way to get to the reserve is by driving via Bells Line of Road and then Mount Irvin Road.

Where to stay near Cathedral Reserve

The reserve is about 1hr drive (45km) from Katoomba, so you could stay anywhere in the Blue Mountains. We stayed at a lovely Airbnb cottage in Leura. If you prefer to be a little closer, Bilpin is 35 km away along Mount Irvin Road. And if you feel like a once-in-a-lifetime splurge, stay at the extraordinary luxurious Treehouse in Bilpin.

There is a free campground at the Cathedral Reserve so you could easily combine your firefly experience with a camping adventure.

An Amazing Glow Worm Tour in the Blue Mountains