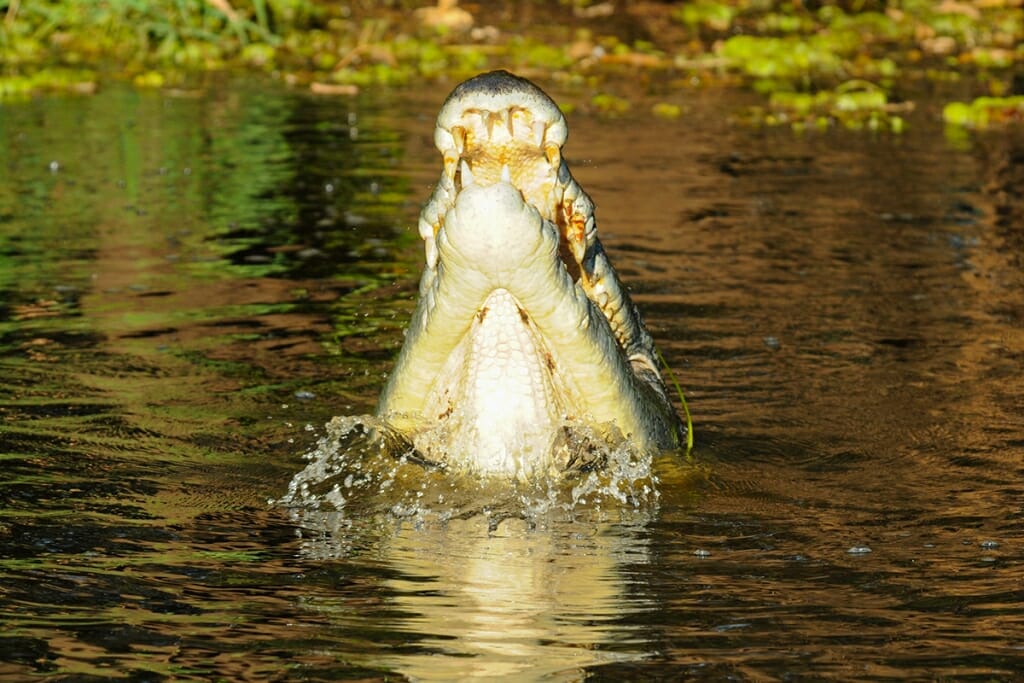 From Katherine Gorge, we headed to Kakadu National Park to check out some of the amazing Kakadu animals. This stunning UNESCO Heritage-listed National Park is a ‘must-see’ for anyone wanting to experience the rugged beauty of the Australian wilderness. At almost 20,000 square kilometres, Kakadu is the largest National Parks in Australia. Roughly the size of Slovenia, it extends for nearly 200 kilometres from north to south and over 100 kilometres from east to west.

If you are going to visit only one National Park in Australia, make it Kakadu. It is located 150 kilometres south-east from Darwin and can be easily visited as a weekend getaway.

Kakadu contains most of the major habitat types of Australia’s Top End, including the stone country, hills and ridges, savannah woodlands and monsoon forests, billabongs, floodplains, tidal flats and coast. These habitats harbour an astonishing diversity of wildlife.

One of the most interesting features of the park is the seasonal wetlands that change dramatically between the rainy and the dry seasons. Kakadu wetlands are of international significance, with over 40 species of migratory birds travelling here from Russia, China and Japan.

We visited in April, the first month of the dry season, meaning that the flooding started to subside, though many areas accessible during the dry season were still underwater. We were determined to make the most of our visit and see as many Kakadu animals as we could.

We based ourselves at Cooinda Camping ground and spent 3 days exploring the wildlife of Kakadu National Park. One of the best way to see the wildlife in the park is by cruising the Yellow Water Billabong. There are early morning and late afternoon cruises available at Cooinda and we did them all.

The Yellow Water Billabong provides the perfect habitat for two species of most famous Kakadu animals: Saltwater crocodiles and Freshwater crocodiles, a phenomenal variety of bird species and a number of smaller reptiles.

Just about any body of water in the park may very well be hiding one of the world’s most formidable predators underneath its deceptively calm surface.

Salties are by far the more impressive of the two. They are the most well-known of Kakadu animals and the world’s largest reptiles. They may grow to over 6 meters long, weigh over 1,000kg.

The largest Saltwater crocodile ever recorded was shot in Queensland in 1957. That animal was reported to be 8.6 meters long. It pays to remember that when you are looking at a submerged crocodile with only the top of its head and snout visible above the surface, that visible part represents 1/8th of the animal’s total size.

The Saltwater crocodiles are Australia’s largest estuarine predator. In 2010, a group of awed tourist at Kakadu watched a Salty gobble a 3-meter-long Bull shark. And in 2011, a large male saltwater crocodile killed a Bengal tiger in India’s Sundarbans – the area infamous for its man-eating tigers.

However, life is not always peachy even for such a formidable predator. Only about 1% of all hatchlings reach adulthood. The rest fall prey to fish, birds, monitor lizards and other crocodiles. Though, those that do mature can live for up to 70 years.

The Freshwater crocodiles are endemic to Australia. They are much smaller than Salties and are not known to attack people.

As the name suggests, they live mainly in freshwater wetlands, billabongs, rivers and creeks, though they are tolerant of saltwater. They are a poor competitor for Salties, which means they are not the easiest of Kakadu animals to spot. We’ve only found one Freshie in our few days in Kakadu.

The snakes in Kakadu are as abundant as they are diverse. One of the most interesting species found in the park is the aquatic File snake. It takes its name from its rough, file-like skin that helps the snake grip its slippery aquatic prey. Another snake common in the waterways is the Water python that preys on birds and their eggs.

Most of our snake sightings happened on the road. We spotted a Black-headed python, Children’s python, Carpet python, Olive python, Golden tree snake, Common tree snake. This, of course, is a reminder about how important it is to drive very carefully in Kakadu at night.

Amphibians are also quite abundant in Kakadu. There are about 25 different species that make their home in the park. Given the unique nature of the billabong habitat, many frog species burrow into the mud when the water recedes and spend the dry season underground, waiting for the rains to return.

Kakadu is home to over 280 species of birds, about a third of all Australian birds! No wonder, the park is considered one of the best bird watching destinations in Australia.

During the wet season, when the floodplains are inundated, the birds don their finest plumage for the breeding season. As the water recedes in the dry season, the birds congregate on shrinking billabongs in huge numbers.

Comb-crested jacanas were very abundant on the Yellow Water billabong. This species is also known as the Jesus bird, because of their apparent ability to walk on water – a superpower they owe to their hugely elongated toes that allow them to balance effortlessly on top of water lilies and other aquatic plants.

Interestingly, it is the male Crested jacana that looks after the chicks once they hatch. Most of them take their paternal duties quite seriously, religiously chasing away any intruders.

Another species I was searching for was the Jabiru stork. It was too early in the season for them, but after 3 days and 6 cruises, we found the first Jabiru of the season.

I was also hoping to see Brolgas at Kakadu, but while we saw a few birds flying overhead, we never got a chance to actually watch or photograph them.

Any wilderness in Australia is likely to be home to a few species of parrots. Kakadu is no exception. Driving around the park we spotted Little corellas, Sulphur-crested cockatoos, Red-tailed black cockatoos and Red-winged parrots.

The raptors are represented in Kakadu by the White-bellied sea eagle, Whistling kite and Black kite. April is the start of the raptor’s breeding season as well and many birds can be seen carrying nest material in their talons.

We are not the keenest bird watchers around, so we didn’t go too far out of our way to see the most birds in the park, but we still managed to spot quite an impressive variety.

Kakadu is home to more than 60 species of native Australian mammals. Although most of them are quite difficult to see due to their shy nature and nocturnal habits. There are Sugar gliders, Brush-tailed phascogales and Northern quolls hiding in the dark forest.

About a third of Australian bats have been recorded in Kakadu. The Black-flying foxes are easy to see. As are the microbars. Though the microbats are very difficult to identify without a bat detector.

You won’t have any difficulties spotting Agile wallabies – the most conspicuous of Kakadu animals. They snooze at the campsites, graze on open lawns or hop along on the sides of the road. We also spotted a Black-footed tree rat, a Northern Brushtail possum and a Dingo. As well as a dead Brown bandicoot on the side of the road.

For something different to do in Kakadu, we decided to explore Ubirr Rock the following morning. This site is best known for its 40,000 years old rock art, but I was more interested in spotting some of the lesser-known Kakadu animals – Short-eared Rock Wallabies that live on the rock outcrops there.

The drive to Ubirr was not an experience for the faint-hearted – the road at Magela Creek crossing was flooded by 0.6 meters of water.

It wouldn’t be too bad if it was just water, but in Kakadu water means crocodiles and stalling at the bottom of the creek surrounded by crocs seemed like a rather grim proposition.  But after some deliberation, we decided to brave the crossing and luckily emerged victorious at the other end.

Ubirr is quite a different environment to most of Kakadu that we have seen so far. It is considerably higher than the wetlands of the Yellow Water Billabong and it offers incredible panoramic views of the floodplains and escarpments below. The wallabies were not particularly easy to find, but we managed to spot a couple perfectly camouflaged against the dark blotchy rocks.

On the way back from Ubirr we drove past a patch-burn and spotted a smoke-dazed Mallee Dragon that ran out into the open escaping the fire. A very unfortunate side effect of prescribed burns is the disturbance they create for the animals whose habitat they destroy.

Other highlights in Kakadu

If you are visiting in the dry season (May to October) and have a high-clearance 4WD, you can explore Arnhem Land Escarpment and check out the iconic Jim Jim Falls, Twin Falls and the Twin Falls Gorge.

About an hour’s drive from Cooinda, Maguk is a pristine natural waterfall fringed by steep walls of the gorge. It is a less-known attraction that is well worth the visit.

Another off the beaten track spot in Kakadu is the Koolpin Gorge and the nearby Jarrangbarnmi Campground. It is the landscape of rocky ridges, cascades and white sandy beaches. You will need a permit to enter Jarrangbarnmi that you can apply for via the National Parks office.

From Kakadu, we headed along the Arnhem Hwy to Mary River. Follow the story here

3 thoughts on “What animals can you see in Kakadu National Park?”