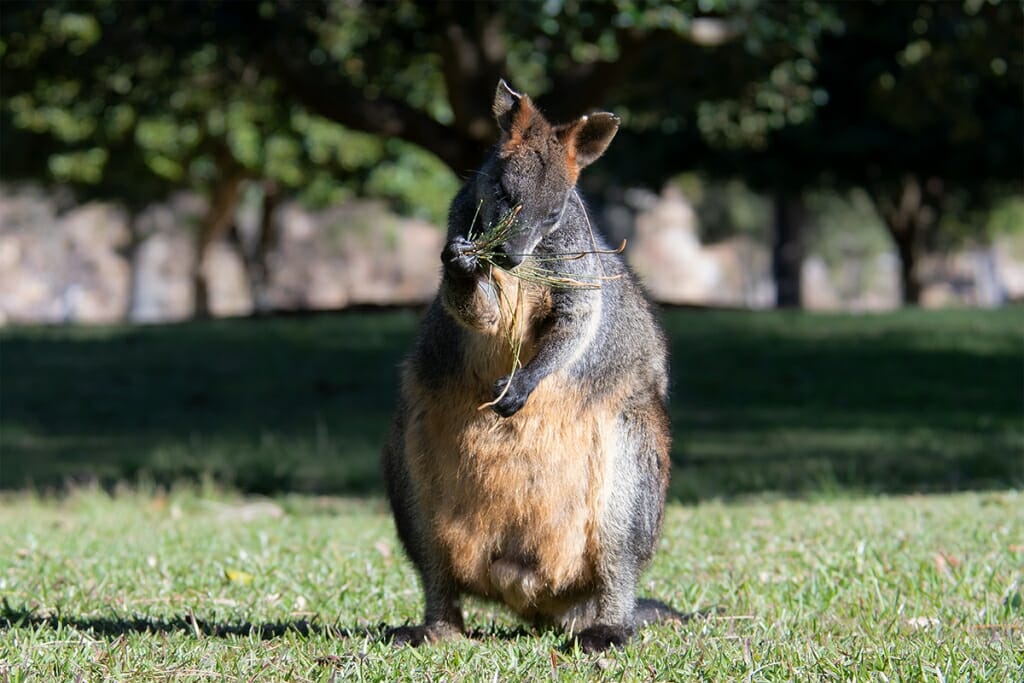 Stretching along the southern end of the Great Dividing Range, between the Hunter River Catchment and Tuggerah Lakes, Watagan Mountains, or Watagans are part of the Eastern Escarpment World Heritage area.

Only an hour’s drive north of Sydney, these mountains contain patches of rainforest that trace their origins to the ancient supercontinent of Gondwana. Despite being made up of a fragmented patchwork of protected areas, Watagan mountains support a great wealth of biodiversity and it is a great area for spotting wildlife near Sydney.

Finding wildlife in the Watagans takes a little bit of effort and knowing when and where to look for it. One of the best and easily accessible places to base yourself for discovering the area is the Basin campground in Olney State Forest. This campground is more off the beaten path than the more popular campgrounds in the Watagans and it usually doesn’t get as busy.

The Basin is a free campsite in Olney State Forest on the bank of Wollombi Brook Creek. The facilities at the Basin are very basic – drop toilets, wooden tables for dining, fire pits and a large grassy clearing to pitch your tent. You can’t drive onto the camping area itself, so you will need to park your car and carry the tent to the clearing. The beauty of this spot is that it lies along the Great North Walk, which means that are plenty of opportunities for bushwalking and exploring.

How to get to the Basin Campsite

From Sydney take the F3 Freeway as far as the Peats Ridge turn off. Turn left towards Peats Ridge and at Peats Ridge turn left onto George Downes Drive. Follow the road for about 14 kilometres until Walkers Ridge Forest Road. Turn right onto Walkers Ridge Road until you come to Basin Forest Road. Take that turn off and travel about 8km to the Basin campground (Google Maps pin). The road is sealed and suitable for 2 wheel drives and for spotting wildlife in the Watagan mountains along the way.

Wildlife watching around the Basin

Another benefit at staying at the Basin is that this quieter site is excellent for finding and watching wildlife of Watagans. From frogs to bats to mammals and birds, this area is a wildlife watcher’s paradise.

As the night falls, the Wollombi Brook Creek at the Basin campground comes to life with a cacophony of frog calls – the most audible wildlife in the Watagan mountains. The stream that runs past the campsite is home to a variety of species. The most numerous and the most vocally dominant are Perron’s tree frogs (Litoria peronii). They can be found clinging to aquatic vegetation, sitting on the banks of the stream or on the trees growing along the creek.

Watagans also provides habitat for a number of threatened amphibians. The less disturbed creeks at the bottom of rainforest gullies are home to Stuttering frog (Mixophyes balbus) and Giant barred frog (Mixophyes iterates). The populations of these two species have been steadily declining over the past decades for reasons that are still unclear.

The biggest representative of the amphibian world that can be found in Watagans is the Giant burrowing frog (Helioporus australicus). Males of this species have very strong spade-like back feet that they use to dig burrows from which they call on rainy nights.  After a good rainfall, these frogs can be seen sitting on the sides of the roads and walking tracks.

The ephemeral ponds that dot the forest floor after heavy rains can be hiding one of Sydney’s smallest and most endangered frogs – Red-crowned toadlet (Pseudophryne australis). This species is very habitat-specific, occurring only on Sydney sandstone soils and therefore being restricted to the Sydney Basin – the area in highest demand for real estate development.

Giant burrowing frogs and Red-crowned toadlets have been dealt a tough hand in terms of reproduction strategy – both species rely heavily on ephemeral ponds for breeding. And given the temporary nature of these ponds, they often dry out before the tadpoles have metamorphosed into little frogs, no longer depending on the aquatic environment for survival.

When driving around at night, take care not to drive through water-filled gutters at the road edges – they may be harbouring tadpoles of these endangered species.

Finding frogs in the Watagans

Typically, frogs are more often heard than seen. It is not surprising since singing serenades in the dead of the night is a sure way to attract predators. To avoid being discovered by predators male frogs prefer to call from concealed locations and can be notoriously difficult to find.

The best way to locate a calling frog is by triangulating its location. This method involves three people standing some distance away from each other listening to the call and pointing their torch beams to the spot where each of them believes the call to be coming from. The spot where all three torch beams intersect is where the frog should be.

Mammals of the Watagans

Frogs, of course, are not the only wildlife in the Watagan mountains. While driving around at night in search of ponds and creeks, bring along a spotlight and see the forest come to life.

Greater gliders and Ringtail possums are often seen foraging on Eucalyptus foliage in the forest canopy. Keep your eyes and spotlights on the canopy as you drive along the forest roads at night. You can spot both the white and the dark morphs of Greater gliders here.

Red-necked pademelons and Swamp wallabies can be spotted throughout the area, including near the Basin campsite.

Yellow-bellied glider, Koala, Spotted-tailed quoll and Large-eared pied and Yellow-bellied sheathtail bats have also been recorded in the park. You can easily see the microbats at night as they chase insects over Wollombi Brook Creek. Identifying them will be tricky of course, you will need a bat detector to detect their high-frequency calls.

There is a population of the threatened Brush-tailed Rock wallabies living in the northern part of the park at Heaten Gap. Early mornings and late afternoons are the best time to see these animals as they sun themselves on the cliffs.

The Basin is home to two species of antechinus:  Brown and Dusky. These animals are difficult to see, but sometimes they can be spotted running across the open spaces.

Birds of the Watagans

The daytime scene is dominated by the calls of Eastern Whipbird, and the awe-inspiring performances of the Superb Lyrebird. The birds themselves are sometimes seen scraping in the leaf litter in dense undergrowth. Some of the other common birds around the campsite are Red-browed Finch, Eastern Yellow Robin, White-throated Treecreeper, Brown Thornbill and Eastern Spinebill.

Lace monitors are also common visitors to the campsite. Another reptile can be found by walking along the stream-side track up the hill to a set of boulders.  Close examination of the crevices in the rocks should turn up a few Southern Leaf-tailed geckos.

Walking tracks from the Basin campground

The most epic walk accessible from the Basin is the Great North Walk which runs for 250km connecting Sydney with Newcastle. But you can do smaller parts of this track for an easy hike. A good option is to follow the creek to Wollombi Brook Pool for a refreshing swim. Simply follow ‘The Great North walk’ sign from the campsite. After climbing the hill, the walk continues downhill coming close to Wollombi Brook again and then ducks into the dense mossy forest, past sandstone caves and across a few small creeks. Keep following ‘The Great North Walk’ sign as the trail meanders through dense forest, crosses another creek and finally emerges on the edge of Wollombi Brook Pool.

If you are looking for a serious challenge and happy to carry your camping gear with you, you can take this walk all the way to Watagan Valley – a hard 13-kilometre track (one way).