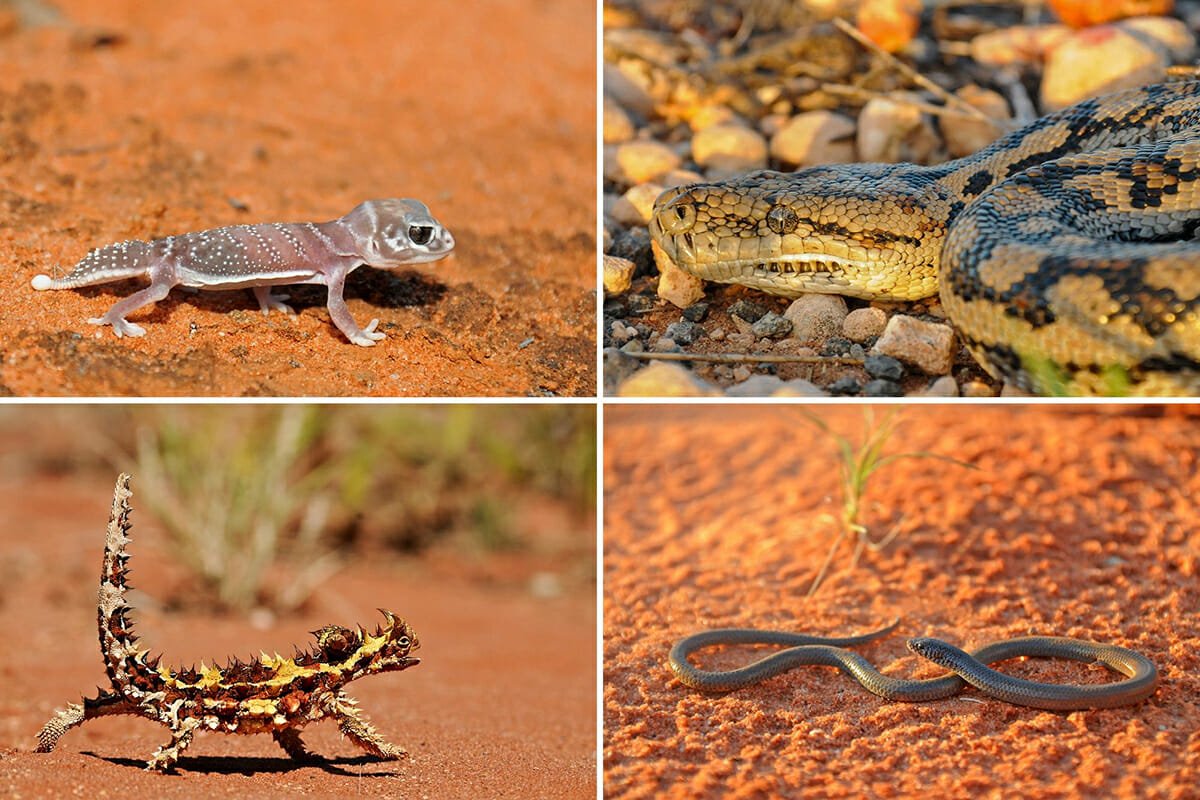 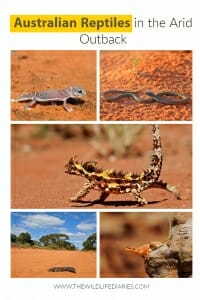 Before settling in Sydney, I was lucky to spend a year working at a network of wildlife sanctuaries in the Australian Outback. While I spent most of my time at Scotia Sanctuary in Western NSW, we also carried out frequent surveys on a few properties in South Australia. Pitfalling surveys were an excellent opportunity to discover the diversity of Australian reptiles found in the arid and semi-arid Outback.

Prior to arriving at Scotia, I considered reptiles to be the masters of the desert. I was surprised to realize that they are only abundant in spring when Bearded dragons, in particular, can be seen sunning themselves on virtually every surface available. However by the time the summer arrives and the temperatures soar into the 40s, the reptiles become much less conspicuous again.

This, of course, doesn’t mean that you can’t find them if you go looking for them.

In the Outback, the reptiles are represented by lizards and snakes. There are five families of lizards in Australia: monitors, dragons, geckos, skinks and the legless lizards.

Goannas or the monitor lizards are the largest Australian lizards. They are predatory species and have sharp teeth and long claws. They live in underground burrows that they dig for themselves. The most common species in the Outback is the Sand goanna. Like the Bearded dragons, sand goannas are most common in spring when they emerge from their winter hideaways.

The largest monitor lizard is the Perentie, which grows to 2.5 meters in length. It is not as common as the Sand goanna and prefers to live on the rocky outcrops and gorges.

Despite their names, Australian dragons are not the fire-breathing flying giants, but small and often colourful lizards. The common species caught during the pitfalling surveys were: Painted dragons, Mallee military dragons, Nobby dragons. Plus, of course, the very abundant Bearded dragons.

On surveys in the Flinders Ranges, we always had a few Peninsular dragons and the Eyre Peninsula usually turned up some Bicycle lizards, while the Australian Red Centre is home to the Ringtail dragon.

But by far, the coolest Australian lizard is the Thorny Devil. It looks like something out of your worst nightmare but in fact, all of its spikes serve to protect it from its predators. It even has a false head – a not of tissue that the devil would present to the predator instead of his head.

The most adorable Australian reptiles belong to the gecko family. The most notable representative of the family in western NSW is the Knob-tailed gecko. These guys remind me of little puppy dogs with their huge eyes, wide feet and short fat tails.

In South Australia, there is a very similar Barking gecko. When threatened, barking geckos stand tall on their dainty legs and sway from side to side, trying to appear larger than they really are.

The third and the most abundant family of reptiles in Australian Outback is skinks. There are dozens of different species most of which can only be identified by counting the scales on their faces. Some, however, are quite distinct, such as Sand-swimmers and Shinglebacks.

One of the rarer skins is the Western blue-tongue. In 13 months at Scotia, I have only seen a single individual.

Yet another group of Australian lizards is the legless lizards. These guys look like mini snakes but are in fact closer related to skinks than to snakes.

And then there are snakes. Their beauty is very different to that of fragile-looking geckos.  Australia’s snakes have a deadly reputation. Five out of the world’s ten most venomous snakes are found in Australia (Inland Taipan, Eastern Brown, Taipan, Tiger snake and Death Adder). But despite the danger, or perhaps because of it, snakes are very appealing to many ecologists.

Like lizards, snakes are most conspicuous in spring, when males are looking for a mate. Australia has nearly 200 known species of snakes, with 25 of them considered potentially deadly.

All the dangerous venomous snakes in Australia belong to the family of front-fanged snakes. This is the most diverse family in Australia and many of these snakes are not dangerous to humans.

The most common and perhaps the most venomous snake in western NSW is the Mulga or the King brown. This species is actually misnamed, as it belongs to the family of black snakes.

Once, we came across a pair of male Mulgas engaged in some sort of dispute in the middle of the road. It was an amazing sight to witness. Their bodies were intertwined and their movements lightning-fast.

Seeing one of these deadly snakes usually leaves a lasting impression, but two angry males… I was not going to leave the safety of the vehicle.

Western brown snakes are also quite common, but their colouration can be so variable that I always found it difficult to distinguish them from Mulgas. 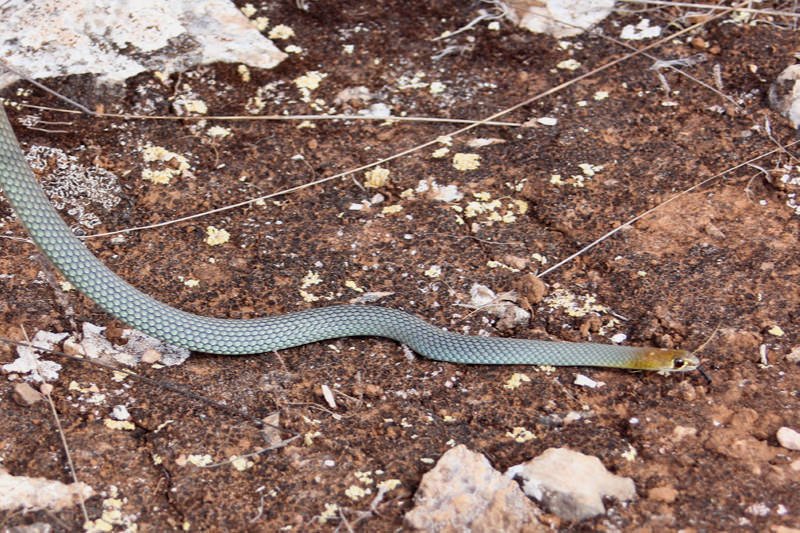 Australia is also home to almost half of the world’s species of pythons. These snakes are neither venomous nor aggressive, but their impressive size makes most people uneasy. In the arid Outback region, the Murray-Darling carpet python is the most frequently encountered python.

Most of the smaller Australian reptiles can only be seen during the pitfalling survey. Here is the link to Peter Hammond’s blog describing his experience with pitfalling at Scotia.

I couldn’t talk about Australian reptiles and not mention the crocodiles. They are not the creatures of the Outback outside of the Northern Territory. There are two species of crocodiles in Australia: the infamous Saltwater crocodile – the biggest croc in the world, and the much smaller Freshwater crocodile. Both occur in the tropical north of the continent, with the saltwater crocodile much more abundant than its freshwater cousin. To learn more about the crocodiles check out my trip report from Kakadu National Park. 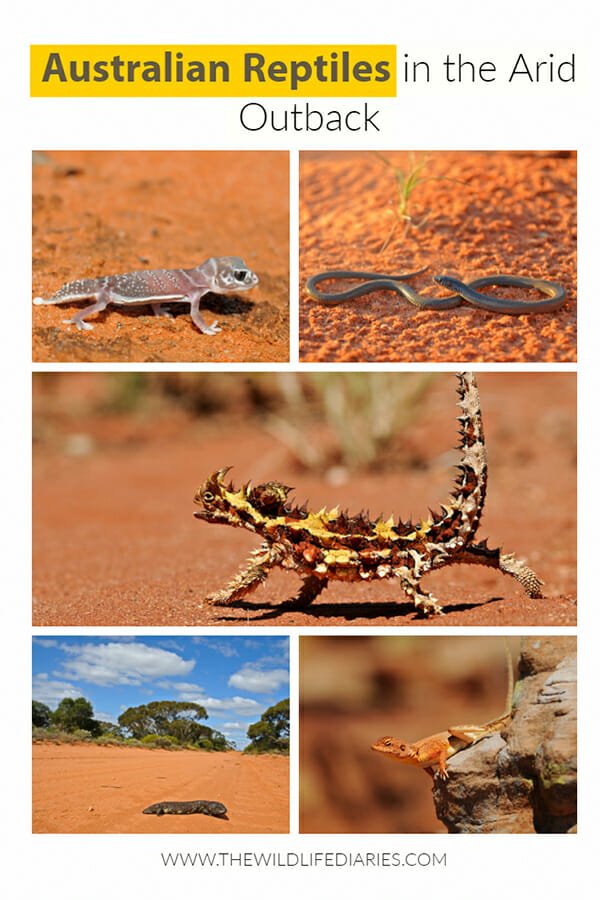