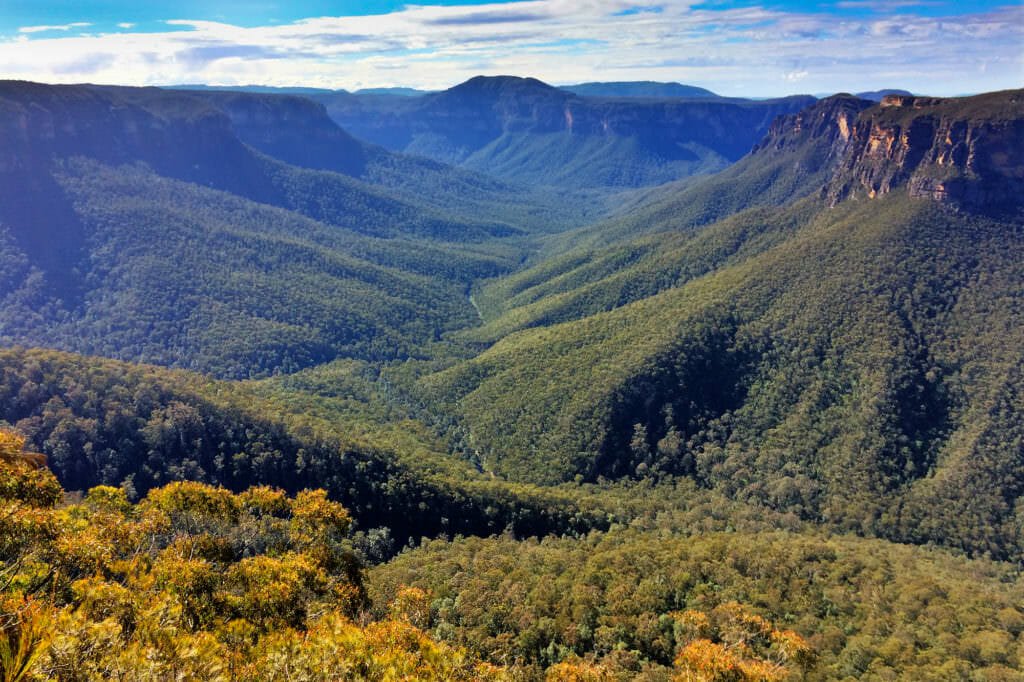 Sydney winter is the perfect time for coastal walks and mountain hikes, so my friend Gaiti and I finally decided to do the Grand Canyon walk in the Blue Mountains – something we’ve been meaning to do since the hot summer days. But while Sydney summer can be just a little too hot for hiking, winter in the Blue Mountains can be rather snippy.

By the time we arrived in Blackheath, the car thermometer was showing 8.8 degrees, about 9 degrees cooler than Sydney. We made our way to the Grand Canyon Loop car park and watched the occasional hikers walk past us dressed in anything from shorts to down jackets and woollen beanies.

Out in the sun, the air felt much warmer than 8.8 degrees would suggest and after some deliberation we chose the middle ground, opting for fleece jackets and leaving Eskimo fashion options in the car.

Ready to start the challenging Grand Canyon walk we looked for the signs to the start of the Grand Canyon Loop track. There didn’t seem to be any, so we followed the most heavily trodden path that led to Evans Lookout.

Having seen a fair share of lookouts in the Blue Mountains National Park over the years, the prospect of seeing another one didn’t necessarily make my heart beat any faster; until I saw it. Stretching across 180 degrees, the view from Evans Lookout sweeps over the top of the escarpment and the deep fold in the landscape that forms Gross Valley with the winding line of Greaves Creek running across the vast valley floor.

The creek seemed unimaginably far away, yet I knew that part of the track we were about to start runs alongside it. With a touch of apprehension, we set out on the journey to the bottom of the Grand Canyon.

In this post hide
1. Grand Canyon Trail at a Glance
2. The Grand Canyon Walk
2.1. The Canyon Floor
2.2. Beauchamp Falls
2.3. The Climb to the top of the Canyon
2.4. How was the Grand Canyon trail built?
2.5. Cave Tunnel
2.6. What goes down must come up
3. More Scenic Walks around Sydney

Grand Canyon Trail at a Glance

Distance: 6.3 kilometres loop
Ascent: 350 meters
Decent: 350 meters
Grade: Moderate (both ascent and descent are quite steep)
Time to complete: 2 – 4hrs (depending on your pace and the number of rest stops)

From the start, the trail ran through a dramatic pass in the rock and continued downhill via sets of wooden and stone steps. It passed through a gap in the cliffs and across wooden bridges, descending ever deeper into the canyon.

“What goes down must come up”, teased Gaiti, pulling me out of my daydreams about lost worlds and pre-historic creatures. Ironically, as much as I love wilderness areas, I am not a fan of steep uphill climbs. They make me feel like my chest is burning with hellfire and my legs turn into molten rock. But for now, it was all downhill and I chose not to think about the other side.

Soon we found ourselves in a narrowing chasm, in the world of ancient ferns, dim light, and trickling water. We had reached the floor of the canyon. The walls of the cliffs were so high here, that we could barely see where they end.

From this low perspective, you get a keener sense of the mammoth scale of the landscape around you than you do from the clifftop lookout. I thought of the millions of years that it took nature to carve out this canyon, and my daily worries simply dissipated in the face of such vastness.

It was this stretch of the walk that attracted me to the Grand Canyon hike in the first place. The trail wound alongside Greaves creek, crossing it every so often.

This enclosed passage is a treasure chest of hidden nooks and crannies, tiny waterfalls, picturesque pools, fallen tree trunks and concealed gullies. I got lost in this wonderland, while Gaiti forged ahead keen to see how quickly she can complete the 6.3-kilometre track.

At one of the creek crossings, there is a sign pointing towards Beauchamp Falls via Rodriguez Pass. This is a worthwhile detour to see the lovely Beauchamp falls.

The trail is quite challenging with steep sections and some bouldering sections, but it is quite short and adds an extra sense of adventure to the Grand Canyon walk.

The Climb to the top of the Canyon

Back on the main track, the trail soon started to climb back up. The initial ascent was not too long, but it was hard work. Before long I was boiling underneath all my layers, although my ears and nose were still cold from the exposure to cold air.

As I climbed a steep set of stairs and felt my lungs beginning to burn, I spotted Gaiti perched on a rock on the side of the trail, having a snack and looking fresh as a daisy. I plonked myself next to her and for a while tried to catch my breath.

By the time my senses returned, Gaiti was off to power up another set of gruelling steps, satisfying her Capricornian traits. In stark contrast to me, stairs make her happy.

How was the Grand Canyon trail built?

Left to my own thoughts, I imagined the hardships that the builders of this trail faced. The Grand Canyon Loop track first opened to the public in 1907. To put this in perspective, it was before the Communist Revolution in Russia, before the fall of the Ottoman Empire and certainly before the days when helicopters would deposit pre-processed sandstone blocks along the trail. This very steep trail was built with nothing more than shovels, crowbars, and dynamite.

My job of simply walking the trail now felt like a piece of cake. Having climbed about halfway to the top of the escarpment the trail evened out and continued along a dramatic claystone ledge, looking down into the canyon from above. I remembered reading in the guidebook that the creek could be as far as 30 meters below me now.

Further up the trail, I walked past an anchor point where heavy chains were wedged into a large rock beyond the trail’s railing. This is the entry point for abseiling into the canyon, but today there were no climbers around.

Listening to the trickling sound of running water, I tried to see the creek below, but it was concealed by the overhanging ledge. I was so intent on catching a glimpse of the canyon floor again, that I barely paid any notice to the trail.

When I looked up, I was surprised to discover that the path ahead ran straight into a pitch-black cave. There was not another soul on the trail and I felt like a true explorer as I stepped in to complete darkness. The darkness, however, only lasted a couple of steps and almost straight away I could see the light on the other side – the tunnel turned out to be very short.

What goes down must come up

From the tunnel, the trail continued to run over relatively flat ground, but soon I started getting glimpses of the formidable walls of the escarpment through the breaks in the canopy. Today they were my Everest. I mentally braced myself for the climb as the first set of wooden steps appeared on the trail.

For the next few hundred meters, the stairs alternated between the gentle wooden steps and the steep stone ones. Each time the path disappeared out of view behind a bend, I hoped that this was the last lot of stairs. Each time I was wrong. The serpentine climb felt to go on forever, even though I knew that the trail ascended no more than 350 meters.

Thankfully, the view from the top was quite spectacular. I spent an inordinate amount of time admiring it, as I stopped to catch my breath every 20 or 30 steps. The lush carpet of green forest undulated over the mountains, broken by the patches of yellow and orange sandstone outcrops where the topsoil had weathered away.

I soldiered on up the steps and suddenly without warning, without any gradual change of scenery the trail ended and I emerged at a car park, 1.4 km away from Evans Lookout. Surprised, I felt a flood of conflicting emotions.

The sense of accomplishment from summiting my 350 meter-high Everest was offset by a tinge of disappointment that the trail ended sooner than I expected. At my dawdling pace, I completed the walk in just over 2 hours, while the guidebook suggested 3.5 hours. However, if I wasn’t trying to keep pace with Gaiti, I would have spent a lot more time on the bottom of the canyon exploring all the nooks and crannies of that unique environment.

I followed the signposted trail to the car park, grateful to be on a flat stretch for a change and by the time I arrived, Gaiti had unpacked the thermos and we indulged in a deliciously hot cup of tea. The sun had now sunk lower in the sky and the weather turned quite chilly.

On the drive back, we stopped for a cup of coffee at the white-walled fortress-like Hydra Majestic Pavilion. The shop inside was full of rustic country charm – the perfect atmosphere to rest our weary feet after an eventful day in the mountains.

The Giant Stairway and the Dardenelles Pass in the Blue Mountains