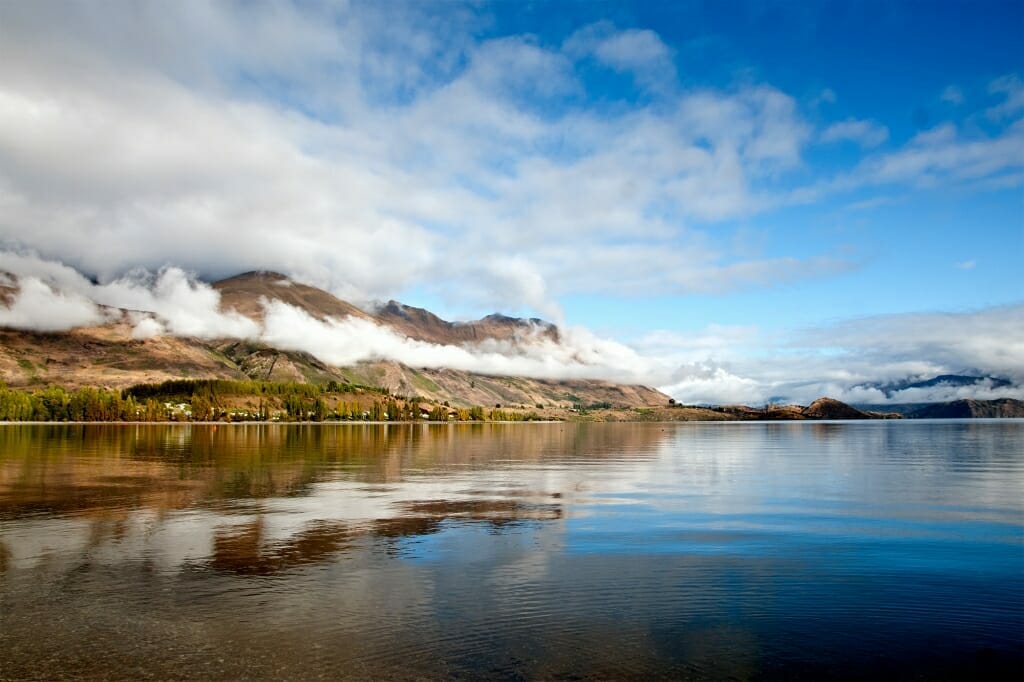 Living in Australia, we often overlook New Zealand in favour of more distant and exotic destinations. And it is a shame, because, in terms of natural beauty, New Zealand is one of the most stunning countries on earth. So when an opportunity presented itself to join three of my friends for a one-week road trip on New Zealand’s South Island, I didn’t hesitate.

Because we only had one week in New Zealand, we jam-packed our South Island itinerary with as many places of interest as we could. We had a mixed group in terms of ages and interests and travelling around in our own car was the option that suited all.

Our plan was to visit the most outstanding scenic destinations, and that meant basing the trip around Queenstown and exploring Te Wahipounamu UNESCO World Heritage Site that encompasses Mt Cook National Park, Fjordland National Park, Mt Aspiring National Park and Westland National Park. Between the fjords, the alpine lakes and the glaciers this area of the island is unbeatable in terms of awe-inspiring sights.

Below is the summary of our one-week New Zealand South Island road trip Itinerary with links to more detailed posts on each part of the journey. Please note that the driving time estimates do not include sightseeing stops, of which there will be many.

We started the trip in Queenstown – a cute little town perched on the edge of Wakatipu glacial lake and fringed by the mountains of the Southern Alps. It has a buzzing atmosphere of an alpine village and a population of 1900 people – which is 100 people less than the occupancy of World Square complex where I work in Sydney.

Queenstown markets itself as the adventure capital of the world (and rightfully so), which means that the town’s economy is geared towards adventure tourism in all its shapes and forms: canyoning, jetboat rides, bungy jumping, sky diving, mountain biking, whatever your adventurous soul desires.

We were more on the nature tourism side of the spectrum, and most of the destinations require at least a short drive from town. So for the first afternoon in town we were happy to cruise around the tourist district of Queenstown and soak up the atmosphere. We had burgers at the iconic Fergburger, strolled around the Marine Parade and the lakeshore, and checked out the adventure gear stores.

We ended the day in the frozen interior of Below Zero Ice Bar. Hand sculpted by one of the world’s top ice carvers, everything in this funky bar is made of ice: the walls, the bar, the furniture and even the glasses. The temperature in the bar is kept at a snippy -8°C, but the big cozy down jackets you get at the entrance keep you toasty warm.

We started our explorations with a day trip to Glenorchy – a small lake-side town 46km north of Queenstown. The winding road from Queenstown to Glenorchy follows the shoreline of Lake Wakatipu and it is pretty much a continuous 46-km long photo opportunity. Even though we were seeing it on an overcast day.

When I think about New Zealand, the first thing that comes to mind is the magnificent scenery portrayed in The Lord of the Rings movies. While the only surviving movie set from the LOR films, the adorable Hobbiton is located on the North Island, the scenery of the Middle Earth is unmistakably South Island-ish.

So not surprisingly, a week-long road trip through parts of the South Island felt like a journey into the Middle Earth. And this part of the island is the perfect introduction to the mystical world of elves and wizards. The area around Glenorchy is where Isengard, Lothlorien and Amon Hen were filmed. The Queenstown to Glenorchy road takes you past the filming locations for Amon Hen and Ithilien camp. The red beech forest lying along the road from Glenorchy to Paradise was used to create the scenes in the elf kingdom of Lothlorien.

Read more about Queenstown to Glenorchy part of the trip

Due to our time constraints, we opted for an organized tour to Milford Sound. And it was a great decision in the end. Our driver provided an entertaining running commentary for the entire 4 hours of the journey to the fjord.

It was another cloudy and rainy day and we were happy to be carted around from one site to the next in the warm and dry comfort of the coach. The drive to Milford Sound passes the attractive town of Te Anau, perched on the side of yet another stunning glacial lake – Lake Te Anau.

Between Te Anau and Milford Sound, there is a number of particularly scenic spots and the coach stops at most of them. Provided it’s not raining, as it was on our trip. We still got to see the Mirror lakes, the Lyre flats and the magic temperate rainforest at the Chasm.

As far as the cruise on the fjord goes, the rainy weather didn’t matter, since the Fjordland National Park is one of the wettest places on earth, where it rains 90% of the time. I would have liked to experience Milford Sound both on a clear day and on a rainy one, but if I had to choose one, I’d pick the rainy day.

The low-hanging clouds blotted out the rest of the world, making the experience even more immersive. And the low visibility contributed to the feeling of exploring the unknown.

The Milford Sound cruise was one of the main highlights of our trip that was seemingly made up only of highlights. It is an absolute must for any New Zealand South Island itinerary. If there is only one thing that you can do in Queenstown for a day, do the Milford Sound cruise. And if you have more than a day to spare, check out this fantastic overnight cruise on Doubtful Sound.

More about our adventures at Milford Sound

This was the day of incredibly scenic driving. From Queenstown, we travelled to Wanaka – a small town on the shore of, you guessed it, a glacial lake – Lake Wanaka.

Then we followed the coastline of Lake Hawea to Mt Aspiring National Park. That’s the beauty of road tripping in New Zealand – instead of driving from town to town, you drive from a lake to a National Park, to a glacier.

We drove through the dramatic Haast Pass, which at 562 meters above the sea level is the lowest of three passes traversing the Southern Alps. After a brief stop at Haast township, which was made up of a diner and a toilet block, we soon arrived at the West Coast of South Island.

The road followed the coast for some time and then headed inland to Jacobs Creek, eventually arriving at the charming town of Fox Glacier. The town is tiny and seems to exist solely as a base for exploring the glacier.

More on Queenstown to Fox Glacier part of the journey

The following morning we took a helicopter ride to the top of the Fox Glacier. Since there were 4 of us, we had the heli to ourselves and that ride was the second brightest highlight of our trip, on par with the Milford Sound Cruise.

The heli took us from town past the dramatic mountain scenery right to the snow-covered twin summits of Mt. Cook and Mt. Tasman. We spent about 10 minutes on the snow at the top of the glacier and then returned to town.

Still flying high from the ride, we started our drive to Lake Pukaki. Back through Mt Aspiring National Park, past lakes Hawea and Wanaka and onto the planes of Canterbury.

We spent the night in Twizel – a bleak and uninspiring town because it is the closest accommodation option for Lake Pukaki.

More on Fox Glacier to Lake Pukaki part of the trip

In the morning we headed straight to the Lake. Even after seeing so many glacial lakes, we found the milky-blue waters of Lake Pukaki absolutely awe-inspiring. The snow-covered peaks of Mt. Cook National Park fringing the lake, gave the scene a dream-like idyllic appearance.

We explored the nearby lake Tekapo and then headed on another spectacular drive, to Aoraki (Mt. Cook) National Park. This side of the National Park was a towering wall of jagged peaks covered by the flowing ice of the Sefton Glacier.

Without enough time to go on a hike, there isn’t that much to do at Mt. Cook village, apart from getting a cup of coffee and learning some interesting facts about the area at the gift shop. But if you do have sufficient time, here are some suggestions for excellent hikes to do on the South Island.

From Mt. Cook we started the long drive back towards Glenorchy. We crossed the Middle Earth again when we travelled through the Central Otago – the site of Gondor, and the Kawarau Gorge – the filming location for the Pillars of Argonath, had late lunch at the adorable Arrowtown and arrived in Glenorchy in total darkness.

To keep the movie locations theme of our New Zealand road trip, we rented a bunker via Airbnb that was used on the set of Vertical Limit, one of my favourite mountaineering films.

More on Lake Pukaki to Glenorchy part of the trip

I spent the morning walking along the mangrove walkway in Glenorchy. There was no one else on the trail and I had the place to myself. Not that we ever felt crowded in New Zealand. In fact, one of my favourite things about travelling in New Zealand was how few people there are around.

We went for a drive to Klinoch – a very small village at the northern tip of Lake Wakatipu and then started making the slow way back to Queenstown. We have driven this road so many times, that it felt like home. We were all a little sad that it was our last drive along via route. We spent the afternoon in Queenstown, sampling the restaurants and soaking up the last sights of this charming place.

Overall, New Zealand is an incredibly beautiful country and it can take months to explore all the attractions on the South Island alone. But we felt we have seen some of the most spectacular spots in the short time that we had, and we were leaving with a dream of coming back to see the rest.

New Zealand South Island road trip is one of those rare adventures that is equally beautiful in any weather. However, the weather can be quite unpredictable and you’ll be wise to pack a warm jacket, waterproof jacket and waterproof boots, especially if you are planning to visit Milford Sound. We visited in March and while it was t-shirt weather during the day, it could change very quickly to the point where I would wear a puffer jacket.

Looking for adventures on New Zealand’s North Island? Check out Rotorua – a town that lies inside an extinct volcanic crater, surrounded by otherworldly geothermal parks