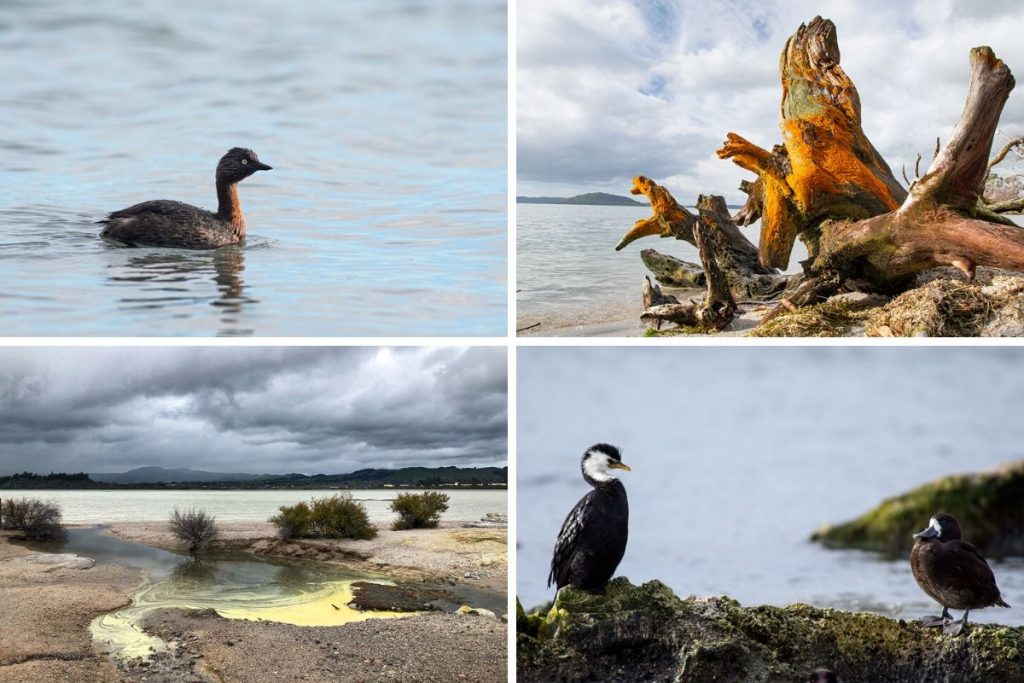 As far as unusual birdwatching destinations go, Lake Rotorua will top many lists. The lake and its namesake town lie inside of a collapsed volcano crater known as the Rotorua caldera. About 220,000 years ago, a violent eruption of the ancient supervolcano obliterated all life in its path and reshaped the landscape, leaving behind a 22-kilometre wide crater that is now filled by Lake Rotorua.

Where is Lake Rotorua?

Lake Rotorua is located in the Bay of Plenty Region on New Zealand’s North Island. The town perched on the lake’s southern shore is also named Rotorua, which means “The second great lake” in the Maori language”.

It can be reached by a 3-hour drive from Auckland via State Hwy 1 (228 km), making Rotorua a perfect weekend getaway from Auckland. Although, if you prefer to spend your weekend escapes in the big smoke, there are plenty of campgrounds in Auckland that offer fantastic bird-watching opportunities.

How to explore Lake Rotorua

The southeastern corner of the lake, accessible from Rotorua town centre and known as Sulphur Bay, is made up of a Wildlife Refuge and a Wildlife Sanctuary. Due to high geothermal activity around this part of the lake, the water in the bay is low in oxygen and quite acidic. Some parts are particularly acidic, like the Sulphur Point, where bright yellow sulphurous hot spring pools on the shore. Unlike the mostly alkaline pools in the nearby Kuirau Park.

Despite these challenging conditions, the lake is home to various bird species, including the threatened New Zealand dabchick and the world’s most threatened gull species – the Black-billed gull.

Most of the birds have to look for food elsewhere, as not many insects or aquatic organisms can tolerate the acidic conditions of the lake. Even the birds’ feet become corroded by the acidic water. Yet the warmth and the refuge provided by the lake seem to outweigh the inconveniences, as far as the birds are concerned.

I visited the lake on a gloomy, rainy September morning, but by the time I reached Sulpher Point, the rain had stopped, the sun came out, and the lake transformed almost beyond recognition.

Gulls are by far the most abundant birds on the lake. As hard as I scanned the colonies of Red-billed gulls, I couldn’t spot any adult Black-billed gulls. There were a few juveniles with mottled plumage and black-red bills and feet that could’ve belonged to either species. Juvenile birds are difficult to identify unless you are quite familiar with the species. However, since all of the adults I could see were Red-billed gulls, I assumed the juveniles were as well.

The Southern black-backed gulls (a.k.a. Kelp gulls) were much easier to recognize due to their formidable size.

Despite my poor luck with New Zealand’s most threatened gull species, I did manage to spot another threatened endemic – New Zealand dabchick, also known as New Zealand grebe or Weweia.

The birds you couldn’t miss were Black shags (Great cormorants), Little shags (Little pied cormorants), New Zealand scaup (Black teals) and Black swans. Some of the swans had semi-grown chicks. Further out from the shore, a few Greylag geese were hiding among the swans and scaups.

The grassy patches on the lakeshore turned up a Pukeko and dozens of Welcome swallows that never seem to stop and sit still. Welcome swallows are such mobile birds it is hardly surprising that they self-introduced to New Zealand from Australia.

While the lake itself was primarily the domain of the waterbirds, the forested lakeshore was good for passerines, both native and introduced. Silvereyes were busy collecting nesting material from the reeds growing by the lake, and a New Zealand fantail was so intent on his mating display that he attempted to land on me a few times, veering away at the last possible moment.

The other passerines represented the more recent arrivals in the country: Eurasian blackbird, Chaffinch, Redpoll and Song thrush. The last time I photographed a chaffinch, a blackbird and a song thrush in the same location was in Russia, which is part of these species’ native range.

Here is the summary of the species I observed at the lake. This is, of course, just a fraction of the species found around Lake Rotorua. Here is a more comprehensive species list for the area.

After my initial visit, exploring the lakeshore became one of my favourite things to do in Rotorua. A good way to do it is via the Lakefront walkway that takes you from Rotorua Lakefront Reserve to Moturara Point, where it joins the Moturara Walkway that runs past the Sulphur Point and to the Polynesian Spa in the Government Gardens.