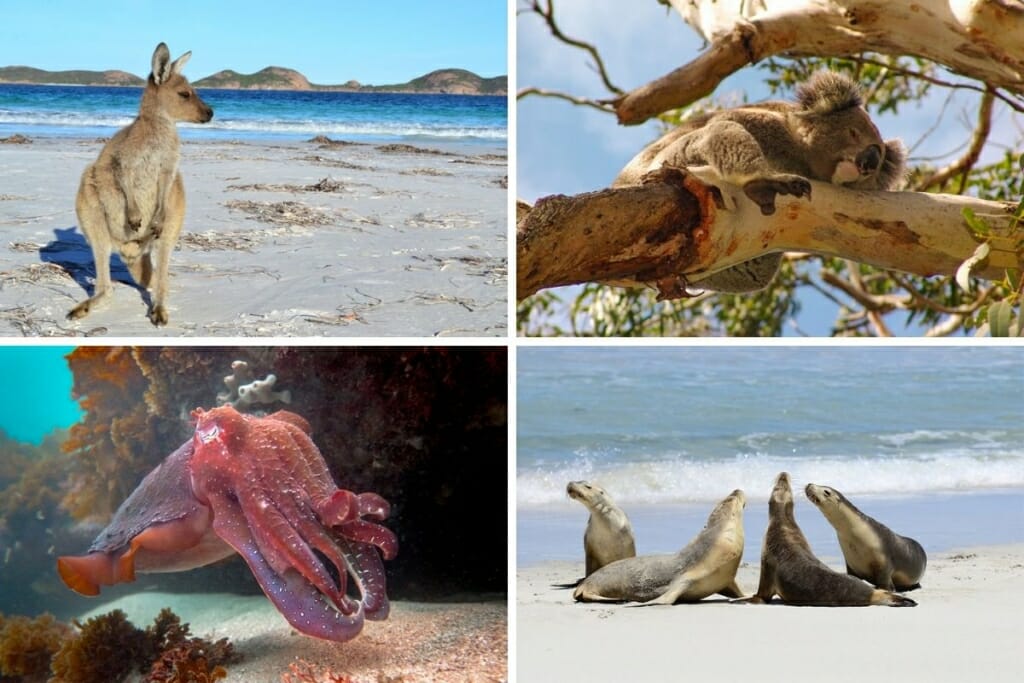 The Australian national anthem paints the picture: “our land abounds in nature’s gifts of beauty, rich and rare.” Nature explorers are wild about wildlife. With millions of annual visitors, increasing numbers of domestic and international tourists channel their animal instincts when making a beeline for some of the most iconic wildlife destinations in Australia. Many of these iconic destinations are also some of the most romantic places to visit in Australia.

World heritage-listed and internationally renowned for being the world’s largest coral reef system, as well as for its snorkelling and scuba diving tours, the Great Barrier Reef in Queensland is abundant in natural wildlife wonders. There are more than 2900 individual reefs over 900 islands, covering more than 2300 kilometers.

To explore this incredible abundance of wildlife you can cruise Michaelmas Cay, take a seaplane over Heart Reef, cruise the Agincourt Reef, or stay on Herron Island right on the reef. Hotels.com offers a range of accommodation accessing the breathtaking marvels of the Great Barrier Reef.

Ningaloo Reef is a 705,015-hectare heritage-listed area located approximately 1,200 kilometres north of Perth in Western Australia. The reef stretches for over 300km and unlike most coral reef that tend to be located well off shore, Ningaloo Reef hugs the coastline for most of its length.

Ningaloo Reef is a heaven for marine wildlife. It is the only place in the world where large numbers of whale sharks congregate each year from April to July in close proximity to the shore. The Exmouth Visitor Centre provides the information on the many tour options available for encountering these giants of the sea.

Apart from the whale sharks, the reef is home to the Manta rays and six species of marine turtles. Humpback whales visit Ningaloo Reef on their annual migrations between their breeding grounds in the warm tropical waters and their feeding grounds in Antarctica.

There are plenty of accommodation options in Ningaloo and surrounding regions to suit all budgets and lifestyles.

One of the most unforgettable places to visit in South Australia, Kangaroo Island is renowned for its raw beauty and wilderness retreats. More than a third of the island is protected in nature reserves and Kangaroo Island is home to Australian sea lions, New Zealand fur seals, it’s own subspecies of Western Grey kangaroo, Tammar wallaby, koalas, echidnas, platypus, and an abundance of birds.

The must-see places include Seal Bay for the sea lions, Admiral’s Arch for the fur seals, Flinders Chase National Park for echidnas, platypus and Cape Barren geese, American River for sea colonies and Little Sahara for a patch of sand dunes on the island.

Wilsons Promontory National Park is located on the southernmost tip of Australian mainland, southeast of Melbourne.  It is well known for its rugged granite mountains and abundant wildlife, including Western grey kangaroos, emus, echidnas and wombats.

While many visitors choose to camp in the national park, there are also great Wilson Promontory lodgings if you prefer a roof over your head.

At around 1200 square kilometers, the world heritage-listed Daintree Rainforest, in northeast Queensland, is part of the largest continuous area of tropical rainforest on the Australian continent. It is the reminder of Australia’s hot and humid past millions of years ago, before the continent’s climate became increasingly drier.

Daintree Rainforest has been identified as Important Bird Area (IBA)  by BirdLIfe International, primarily because it is home to a population of southern cassowaries. It also provides habitat to two endemic species of bowerbirds, lovely fairywrens, fernwrens, owls, kingfishers and many other bird species.

Visitors can choose from a range of Hotels near the Daintree Rainforest to suit all budgets and sightseeing inclinations.

This continental island, located within the Montague Island Nature Reserve, is popular for its seal colonies, birdlife and scuba diving opportunities. You and your family can stay on Montague Island so you can easily wake up and explore the incredible scenery and wildlife without wasting a minute.

The national whale-watching capital of Australia, alongside its neighbouring Hervey Bay, Fraser Island is the world’s largest sand island, stretching over 120km. This eco-tourism destination also provides abundant wildlife sightseeing, such as native dingoes, and swimming opportunities at pristine beaches and Lake McKenzie. There are affordable resorts on Fraser Island in serenity-inducing natural surrounds.

Prized for its rugged coastline and endless white-sand beaches, the Eyre Peninsula is abundant in salmon, abalone, oysters and world-class tuna (which tourists can even swim among). Frollicking sea lions and dolphin sightings are also natural drawcards as are the Southern right whales and Humpback whales during thier migrations.

Smaller terrestrial animals are trickier to spot, but the sightings are all the more rewarding. Check out this trip report from a wildlife survey on the Eyre Peninsula that I participated a few years ago.

A weekend getaway to the Eyre Peninsula is a great way to enjoy Australian coastal lifestyle and see some of the region’s diverse wildlife.

Motorcycle and car enthusiasts flock to the Phillip Island Circuit, but this southern Victorian coastal destination is world-renowned for its Summerland Beach sunset penguin parade. The Nobbies outcrop is also the viewing site for Seal Rocks, home to a large colony of Australian fur seals. With so many places to stay in Phillip Island, you will never be too far away from all the sightseeing action and great family attractions.

Located in the Brisbane suburb of Fig Tree Pocket, Lone Pine Koala Sanctuary is the world’s oldest and largest koala sanctuary. You can visit these native marsupials up close and personal while staying close at hand with a selection of affordable accommodation deals on offer.