With oceans patrolled by sharks, rivers and billabongs teaming with crocodiles and forests concealing venomous snakes and spiders, you may be wondering if there is any wildlife in Queensland that doesn’t want to kill you.

Some travellers might see the dangerous Queensland animals as a risk factor and shy away from visiting the more remote parts of the state, but those who have already travelled to Australia would agree, that Aussie wildlife is one of the most astounding things about this country.

Hopefully, this post will dispel any misconceptions about Queensland animals, while proving they don’t have to be cute and cuddly to be spectacular. Here are the six best places to spot wildlife in Queensland, and to be amazed by the nature of this incredible country. After all, 80% of all Australian wildlife can only be found in Queensland.

If there’s one place that tops most Australian bucket lists it’s Cairns and for one incredible reason – The Great Barrier Reef. In terms of wildlife, it is home to an incredible 1500 species of fish, 134 species of shark and you can also spot six out of the seven species of marine turtles here.

With the Great Barrier Reef boasting an incredible 2600km in length, it can be difficult to imagine the sheer volume of wildlife that breed and dwell within its 900 islands. The Great Barrier reef is larger than the UK, Switzerland and Holland combined, which may explain why it’s not just home to marine life but over 215 species of birds.

With the reef being such a haven for wildlife, it is obvious why over 2 million visitors a year snorkel and dive to capture the beauty of this natural wonder. The majority of Great Barrier Reef tours depart Cairns or Port Douglas in Queensland, with the best snorkel spots being at the outer reef around 90 minutes from shore.

During our own visit, we were overjoyed to witness a turtle swimming in the wild, as well as learning that not even the reef escapes the country’s famous snakes as seventeen species of sea snake call the reef home!

Before your visit, please ensure to research your selected tour thoroughly for the most ethical experience possible. During our tour we were well informed of conservation, sustainable efforts and our tour insisted reef-friendly sun cream was worn.

With over 2 million visitors a year, it is understandable that chemical-based sunscreen contributes to the bleaching of the Great Barrier Reef, so ensure your sunscreen is reef friendly before entering the ocean.

Three hours North of Cairns is a not-so-swim-friendly spot, known as Cape Tribulation, the world’s only natural phenomenon where two UNESCO world heritage sites lay side by side – the reef and the rainforest. However, it is also home to one of Australia’s most (in)famous animals, the crocodile.

Despite the incredible beauty of the area, it is painful to learn that swimming here is strongly discouraged due to these perilous reptiles frequenting the estuaries and rivers.

However, although swimming alongside crocodiles should not be added to anyone’s Queensland bucket list, it is incredibly rewarding to witness these creatures in the wild.

We highly recommend an eco-friendly tour called Solar Whisper tours,  which as the name describes offer solar-powered boats and therefore do not contribute to petrol fumes polluting the waters of Cape Trib. This also means the boats are essentially silent, increasing your chances of spotting one of Queensland’s most dangerous animals.

Better yet, if you don’t see a crocodile during your tour, they allow you to return free of charge. You will also learn about the incredible mangrove eco-system at Cape Tribulation as well as the species of birds, frogs and other marine life that frequent the area.

If the crocodiles are not enough of a deterrent for you not to pop in the sea, perhaps the box jellyfish will be. Between November and May, the deadly box jellyfish also frequent the shores of Cape Tribulation, so despite those crystal waters and pristine beach do not be tempted for a swim, instead enjoy the stunning nature from one of the many nature walks in the area, with a favourite being Dubuji boardwalk.

Now we have covered best of Queensland wildlife under the sea, it’s time for the best location in Queensland to spot one of the many marsupial mascots of Australia – the koala. Although Queensland is one of the few Australian states that allow the handling of Koalas in sanctuaries and zoos, we encourage you not to pay for this experience but instead witness these beautiful creatures in their natural habitat.

Although Kennett River on Great Ocean Road is known as koala capital of Australia, one of the best areas to spot koalas in Queensland is Magnetic Island. It is also incredibly common to spot them along Bruce Highway, so keep your eye out for gum trees or the koala crossings which stretch across the highway!

Magnetic Island is situated only 8km from mainland Queensland, with regular ferries departing Townsville. Once arriving on the island, one of the best things to do on Magnetic Island to guarantee a koala sighting or two is the Forts Walk. The 2.8km walk leads through numerous eucalyptus trees which these adorable marsupials call home before leading to epic WWII forts as well as stunning views of the coral coast.

A second wildlife hotspot on Magnetic Island is Geoffrey Bay home to the unique Allied Rock Wallabies. These curious creatures are much smaller than the usual wallaby and are undeniably adorable to witness in the wild. Their tame inquisitive nature is, unfortunately, due to being fed by people, which we would never encourage, but if you wander down to Geoffrey Bay late afternoon, you will be guaranteed to see them up close, hoping you provide a nibble or two.

Also referred to as Straddie, North Stradbroke Island is another hotspot for Queensland wildlife. To reach the island, you will need to take a 40-minute ferry ride from Toondah Harbour, which is around 30km from Brisbane.

Although you are almost guaranteed to see kangaroos along any Australian Highway around dusk or dawn, Stradbroke Island is the perfect place to see these creatures in a safer environment – when you’re not behind the wheel!

Alongside kangaroos, you can witness the unusual echidna which can easily be mistaken for a hedgehog or porcupine except these fascinating creatures are actually monotremes meaning they are mammals that lay eggs. Again, they are common by the roadside as well as grazing in woodland areas on North Stradbroke Island.

For a guaranteed animal encounter on Straddie, we recommend the North Gorge Walkway which offers views over Morton Bay home to sea turtles, dolphins and between July – October, Humpback whales.

As mentioned earlier, Humpback whale migrating season runs from July to October, and there are numerous whale watching spots on the Queensland coast, with one of the best being Hervey Bay. It is even said that Hervey Bay is the whale watching capital of the world.

A visit to Hervey Bay will not disappoint, with groups of up to a dozen Humpback whales passing through sheltered Hervey Bay on route to the Antarctic. There are numerous whale watching tours departing from Hervey Bay that will allow you to witness this incredible phenomenon.

Humpback whales are playful and social animals and often engage in behaviours like spy hopping (lifting their heads out of the water) and breaching (jumping completely out of the water), which are commonly observed in the bay. Tours usually run from mid-August to October.

Admittedly, we have saved our favourite Queensland wildlife spot until last – Fraser Island. There are many things to do on Fraser Island such as swimming in the striking Lake Mackenzie, floating in the endlessly fun Champagne pools or driving on the incredible 75-mile beach but regardless of the activity, an animal encounter is almost guaranteed.

We spent three days on the island and were incredibly fortunate to witness the resident dingoes. Dingoes are wild dogs, thought to have been introduced to Australia by the Asian seafarers about 4,000 years ago. During the early days of colonization of Australia by the European settlers, dingoes were considered pests and the famous Dingo fence, the largest fence in the world, was built to protect the sheep country from them.

You can still witness “dingo- deterrent” fencing around the island which is to protect both humans and dingoes allowing these fascinating animals to continue their natural way of life despite the influx of tourists to the island.

It is essential, however, that you remain vigilant and “dingo safe” while visiting the island. Should you encounter a dingo, stand tall and back away slowly without turning your back on them.

During our visit, it was incredibly sad to witness tourists attempt selfies with these creatures as they are wild and if they feel at all threatened, a bite or an attack on the camera waving tourist could be imminent.

Dingoes are protected by the rangers on the island, however, if one bites a human, it is likely to be put down which is incredibly unfair as we are the intruders on their territory. Like with all wildlife, enjoy from afar – by all means, take photos but do not taunt, chase or bribe them in any way for the sake of your safety and theirs.

As mentioned earlier, you can only swim in the freshwater lakes on Fraser or within the Champagne Pools as the beaches are unsafe due to the resident shark population. This does allow for some incredible viewing, however, and we were very fortunate to witness our first wild shark in Australia from Indian Head on Fraser Island. From this breathtaking viewpoint, you will also likely see manta rays and dolphins.

Hopefully, we have not only provided six incredible wildlife watching spots in Queensland but six reasons why you need to visit this part of Australia. With so many beautiful creatures roaming wild within the stunning landscapes of Australia, there is no reason to pay to see these animals in enclosures. Before booking any tours, ensure you research well and follow the state’s wildlife guidelines before you visit.

Darren and Lauren are Scottish travel bloggers who have spent the past two years travelling full time, documenting their travel tales and fails through their blog Far Am A Gan. Far Am A Gan translates to “where am I going” in their local Scots dialect, Doric. Despite their travels round the world they hope their down to earth advice inspires others to also question, “Where am I going?” whilst sharing ethical tips, funny anecdotes and hidden gems along the way. 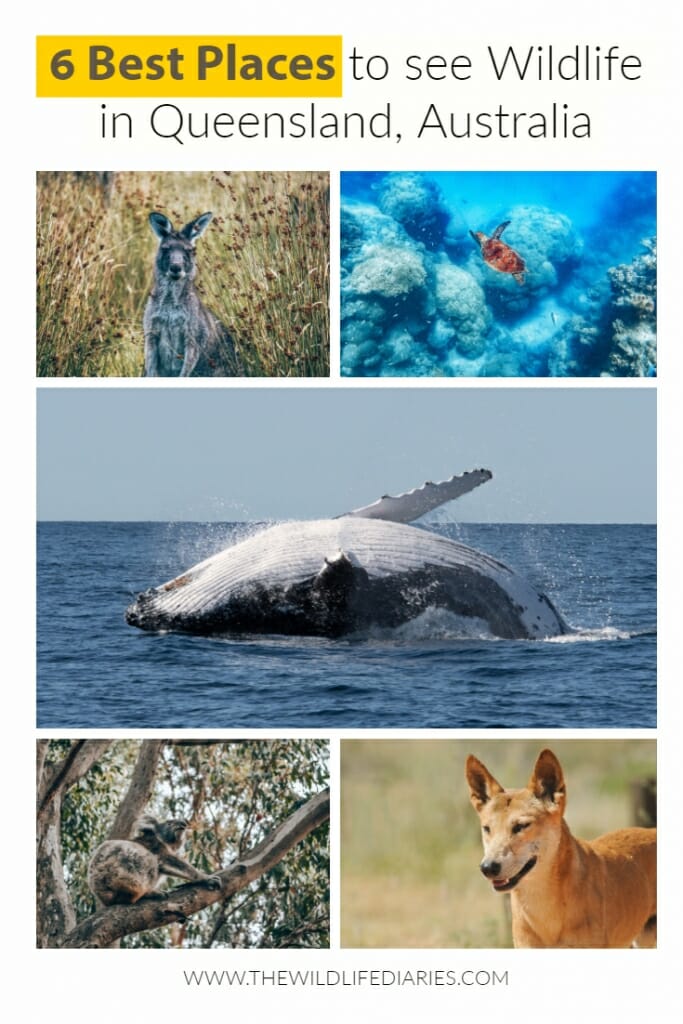 4 thoughts on “6 Best Places to see Wildlife in Queensland, Australia”