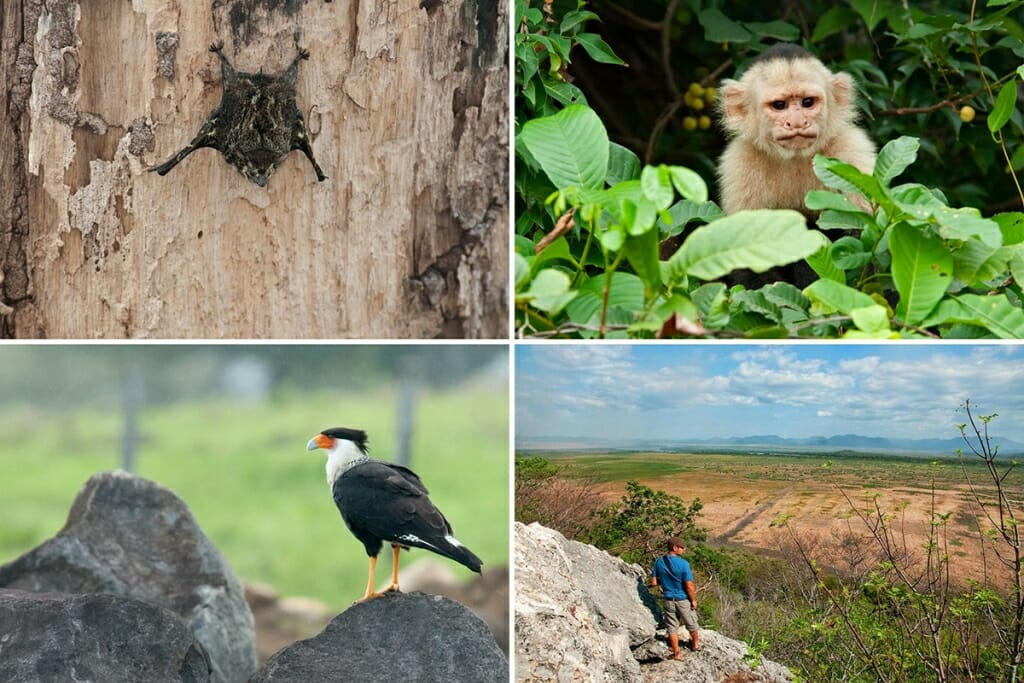 Lying in the valley of the Tempisque River in Guanacaste Province and covering 45,492 acres, Palo Verde National Park is one of the most unique National Parks in Costa Rica. It is simultaneously a huge floodplain and a tropical dry forest. Depending on how you visit the park, you would see completely different environments.

Most people visiting Palo Verde are drawn to the park’s wetlands and the astonishing abundance of birds that they attract. Guanacaste is one of the driest parts of Costa Rica and the seasonal wetlands of Palo Verde provide habitat for thousands of local and migrant bird species. Parajos Island, located in the middle of Tempisque River, is the largest nesting site of the Black-crowned night-herons in Costa Rica.

The tropical dry forest is a fascinating environment. Because the trees and bushes do not get enough rainwater, they shed their leaves during the dry season and the process of photosynthesis takes place in their bark, which gives the tree trunks an unusual green colour.

Combined, the different habitats at Palo Verde provide a home to an impressive array of wildlife species. Apart from the waterbirds, the park is a good place to see monkeys, coatis, deer, crocodiles and other water-loving reptiles.

So if you want to see wildlife in Guanacaste, head to Palo Verde National Park.

There are essentially two ways to explore the park: by a boat cruise along Tempisque River and by driving or walking through the rest of the park.

We did both as part of our Costa Rica itinerary, first taking a half-day tour including a boat cruise from Liberia, and later returning to the park in our rental car and exploring the dry forest.

Palo Verde National Park lies about 1.5 hr drive from Riu Guanacaste resort in Liberia, where we stayed for my friends’ destination wedding. We decided to take a break from all the wedding-related activities and take a river cruise in Palo Verde with the local family-owned Palo Verde Boat Tours. As soon as we drove into the forest, we saw our first mammal – a White-nosed coati.

Once on Tempisque River, our encounters with wildlife became a lot more up close and personal. At one point a troop of White-throated capuchins approached the boat along the overhanging branches of the mangroves.

I smiled at their grumpy faces and they growled back. Turned out that the showing of teeth is considered a sign of aggression in capuchin world.

Thankfully the monkeys were quite used to cultural blunders from inexperienced tourists and minutes later the diplomatic relations were restored as the little terrors made themselves obnoxiously at home on our boat.

The friendship was strengthened further when one of the monkeys familiarized itself with us by taking turns to sit on each of our heads, while the other took charge of the captain’s chair.

The next encounter left me feeling somewhat less comfortable. We passed a number of sinister-looking American crocodiles lying on the bank covered in wet mud. I was thrilled when we spotted a particularly enormous one. Until it started moving and finally slithered into the river.

It was huge, easily the length of our boat. I thought it was wise to move away from the side of the boat and just as I turned my back to the prehistoric reptile, the boat driver threw a piece of raw fish into the air and the crocodile propelled itself out of the water, it’s terrifying jaws gaping wide open, to swallow its ‘prey’.

Most of the other wildlife was predictably less interactive, which is how you hope to see animals – in their natural habitat, engaging in natural behaviours, as if you are not there. Bare-throated tiger heron stood motionless on the bank staring intently into the water. These unassuming birds are responsible for controlling crocodile populations by preying on young hatchlings.

Occasionally we spotted lizards: giant Green and Spinytail iguanas soaking up the sunshine on the banks or on the low tree branches, Common basilisks sitting on the gnarled roots of mangrove trees and trying to be invisible.

And then we found bats. Right out in the open Brazilian long-nosed bats were clinging to the trunk of a tree that rose out of the water. Arranged in a neat vertical row they were perfectly camouflaged against the bark.

The reason these bats roost arranged in a line becomes apparent when the bats feel threatened and start swaying back and forth, making the line appear as if it was a moving snake. A very neat trick.

Two weeks later, we returned to Guanacaste province, driving from Tirimbina Biological Station. Most of the places we hoped to visit, including the magnificent Rio Celeste were closed due to heavy rainfall, so we ended up returning to Palo Verde National Park, coming full circle, back to the place where we started our explorations of Costa Rica.

This time though explored the park from the road and saw a completely different place. On the drive to the park, we spotted a Crested caracara quite close to the road, the closest we’ve seen this bird.

Just outside the park, we came across a flooded grassland occupied by dozens of waterbirds. There were a few different species of Egret, a Little blue heron, Wood storks, some Black-bellied whistling ducks and while we were checking them out two magnificent Jabirus flew in and landed right in front of us. They are quite different from Australian Jabiru and we didn’t expect to see them at all.

In the park itself, we didn’t see much wildlife. It was incredibly dry. Once we got to the river near the Ranger Station, we spotted a Grove-billed Ani and a few White-faced Capucins.

We went on a short hike and climbed to the top of the ridge to check out the views over the Guanacaste countryside. It was on the hike, that we fully experienced just how dry the tropical dry forest really is. Interestingly the dry forest has quite a thick understory. Probably because the leafless trees allow the sunshine to reach the forest floor and promote the growth of understory plant species.

Just as we were driving away from the river, a White-tailed deer dashed across the road, bringing the total of mammal species we’ve seen on this trip to 30. Here is our full species list for Costa Rica trip.

Outside of the park we passed by the same wetland and spotted a few Northern jacanas and Double-stripped thicknees.

The last bird we saw leaving the area was a hawk perched on top of a tree holding on against particularly strong wind gusts.

Palo Verde can be visited year-round. The dry season (December to April) is the best time for birdwatching and hiking. While the wet season (May to November) is good for experiencing the park’s wetlands in all their glory. You can also see reptile babies, like crocodile hatchlings during the wet season.

Palo Verde is located within a 1.5-hr drive from Liberia, which makes for an easy day trip from any accommodation in the city.

If you would like to stay in the area for a few days, you can stay at the dorms at Palo Verde Biological Station, managed by the Organization for Tropical Studies.  The station offers a range of tours from boat cruises to hikes in the forest, as well as photography workshops.

There is also an option to camp. The Ranger Station has drinking water some super rustic toilets.

How to get to Palo Verde

There are a few options for reaching Palo Verde. You can visit it on an organized tour from Liberia, drive or catch a bus.

If driving, head for Bagaces town on Route 1 “Carretera Interamericana.” At the gas station, take Road 922, heading southwest for 28 km on the unpaved road.

If travelling on public transport, catch a bus to Bagaces from Sun Jose (4hrs) or Liberia (1rh) and then get a taxi to the park.