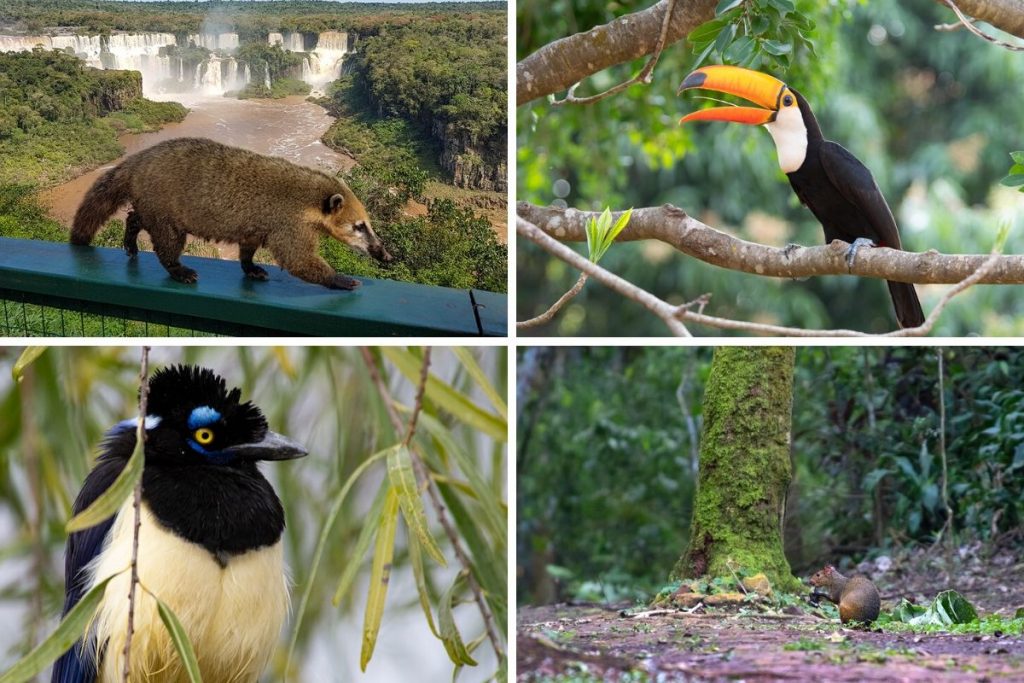 Straddling the border between Argentina and Brazil and featuring up to 300 individual falls, Iguazu Falls are one of the most spectacular natural attractions on the planet. But there is more to Iguazu Falls than the jaw-dropping waterfalls.

Both National Parks have been designated as UNESCO World Heritage sites. Together with Uruguay Provincial Park in Argentina and Mbaracayu Forest Reserve in Paraguay, the four protected areas constitute one of the most extensive remaining tracts of the endangered Atlantic rainforest home to many of its threatened wildlife species.

The parks are home to over 2000 species of plants, 400 species of birds and possibly as many as 80 mammals, as well as countless butterflies and other invertebrate species.

Some of the most charismatic and rare species found at Iguazu Falls include the Giant Anteater, Harpy Eagle and a number of South America’s wild cats including the Jaguar, Puma, Ocelot, Margay and even, surprisingly, the Geoffroy’s cat that typically prefers more open habitat.

Most of these animals are highly elusive, preferring to remain out of sight. But you’ll have plenty of opportunities for spotting the more common wildlife of Iguazu Falls as you explore the waterfall trails. And if you stay overnight within the National Parks, you might even spot a jaguar on an evening stroll.

It would be virtually impossible to visit Iguazu Falls and not spot any wildlife. At the end of your visit, you may wish to never see another coati. But if you would like to see some less obnoxious species, here are some of Iguazu Falls animals you are likely to encounter.

READ MORE: 35 Amazing Brazilian Animals you Can Spot on your Travels

The most conspicuous Iguazu Falls animals are the South American Coatis. Members of the Raccoon family, they live both on the ground and in the trees, feeding mostly fruit and invertebrates with an occasional small animal or bird egg.

They often search for invertebrates by turning over rocks or ripping open logs with their claws. This behaviour translates badly to co-inhabiting with people in places like Iguazu Falls, where coatis insistently raid rubbish bins and scatter rubbish along the trails despite the park’s authorities’ best efforts.

There are numerous signs in both National Parks advising visitors not to engage with the coatis and displaying some rather gory images of wounds inflicted by coati bites.

The black capuchin monkeys are some of the cheekiest Iguazu animals. They also learned to associate tourists with a bountiful food source. They are particularly abundant on the Argentine side where the waterfalls trails run through the densely forested habitat, especially along the Lower Circuit. Despite knowing better many visitors still feed the monkeys encouraging their pestering habits.

The black capuchins are social animals that live in groups of up to 20 related individuals, led by an alpha male. They are considered to be some of the smartest monkeys in the world which is evident in their ability to use tools.

For example, in Foz do Iguacu, male capuchins were observed using a piece of bread attached to a small branch to obtain water by dipping it into tree trunk holes.

They are also fun to watch as they use their prehensile tails as a fifth limb to hang from branches while browsing, just like Costa Rica’s spider monkeys.

I have seen this typically shy animal twice on the same trail opposite Belmond Hotel in Parque Nacional do iguaçu on the Brazilian side of the falls.

While it looks like a tiny deer, the agouti is actually a rodent. It has been compared to a guinea pig with longer legs. They feed on fruit, nuts, seeds and leaves on the forest floor. Their habit of burying seeds earned them the name of ‘jungle gardeners’.

Despite their delicate appearance, they are the only animals that can crack open a Brazil nut unaided, using their sharp rodent teeth. They are shy animals with an alarm call that sounds like a dog bark.

The deer you are most likely to spot at Iguazu Falls is the medium-sized Red brocket deer. While typically a shy nocturnal species, at Iguazu I’ve seen them both on the Brazilian and the Argentine sides.

They typically live alone or in monogamous mated pairs. The pair holds its own small territory which they defend by scent-making it to stake their claim.

The forests surrounding Iguazu Falls are home to a spectacular abundance and diversity of birds. But while some species are quite conspicuous, the majority of birds will be harder to see without specifically looking for them. Here are some of the more common and striking birds you may spot at Iguazu Falls.

One of the most spectacular birds at Iguazu Falls is the Toco toucan. It is immediately recognizable by its exceptionally large beak that it uses to reach distant fruit from its perch in the tree. Although watching a toucan struggle to position a piece of fruit it grabbed in its beak so that it can swallow it, makes you wonder if such an extravagant appendage is worth the trouble.

Another stunning large bird quite common at Iguazu is the Chestnut-eared aracari. Its oversized beak betrays its close relationship with toucans, although aracari’s beak is a little smaller in relation to its body size.

Toucans and aracaris are most conspicuous in flight, so you are most likely to see them as they soar across the open patches. They also have quite loud harsh calls that give away their presence.

Plush-crested jays are noisy social birds that live in groups of ten to twelve individuals. They forage together and cooperate at nesting sites – last year’s chicks help the adults to care for the new chicks. The jays are not shy of people and will often approach looking for food. One of their most interesting talents is the ability to imitate other birds’ calls.

The smaller birds are harder to spot in the forest. Thankfully, many passerine birds in this part of the world are incredibly colourful which makes them easier to see against the green background of vegetation.

Swallow tanager is mostly bright blue with patches of white and black feathers. A good place to see it is the Macuco Trail on the Argentine side of the falls. If you visit around September, you might see them building nests.

The Green-headed tanager is quite possibly the single brightest bird in South America. They are present throughout the forest at Iguazu Falls, but they may be difficult to spot high up in the canopy. We had the best luck spotting them on the small nature trail on the Brazilian side of the falls, across the road from Belmond Hotel.

Another attractive passeriform, Ultramarine grosbeak is a solitary seed eater with dark blue plumage and paler blue upper wings, brows and cheeks. It likes semi-open areas where it forages for seeds, fruit and insects.

Also known as a Turquoise honeycreeper, Blue dacnis is a bright splash of blue against the jungle green (although the female and the immature birds are emerald green). They are social birds that often travel in mixed frocks foraging for insects that they pick off the flowers, foliage and bromeliads.

Red-rumped caciques are social birds that nest in colonies and build large pendulous nests. The visitor center area in Parque Nacional do Iguacu on the Brazilian side of the falls is a great place to watch the colony of caciques, especially if you visit in September when nest building is in full swing.

Great dusky swifts are perhaps the best-known birds of Iguazu Falls. They can be seen flying over the falls in their dozens. These swifts have a peculiar habit of nesting behind the veil of the falls. When you visit the Devil’s Throat on the Brazilian side of the falls, keep an eye on the curtain of the falls and you will notice the swifts flying through the wall of water to and from their rocky nests.

The forests around Iguazu Falls enjoy constant warm temperatures and high humidity making them a heaven for invertebrates, like the butterflies.

Where to see wildlife at Iguazu Falls

Wildlife sightings generally tend to be unpredictable, but there are a few spots at Iguazu Falls that would increase your chances.

Brazilian side, Parque Nacional do Iguacu

Nature trail through the remnants of the old zip line attraction opposite Belmond Hotel on the Brazilian side of the falls. We saw Black capuchins, Azara’s agouti, Red brocket deer, Green-headed tanagers and Blue dacnis there.

Devil’s Throat, where you can see the Great dusky swifts clinging to the cliff face behind the veil of the falls.

Macuco Trail is a great way to get away from the crowds and to explore some of the park’s wild inhabitants. We saw Red brocket deer, Swallow tanager, Ultramarine grosbeak and a few species of butterflies.

Have you had any interesting wildlife sightings at Iguazu Falls? Share your tips in the comments below.

Some useful books about Brazilian wildlife

4 thoughts on “Wildlife of Iguazu Falls, Brazil and Argentina”