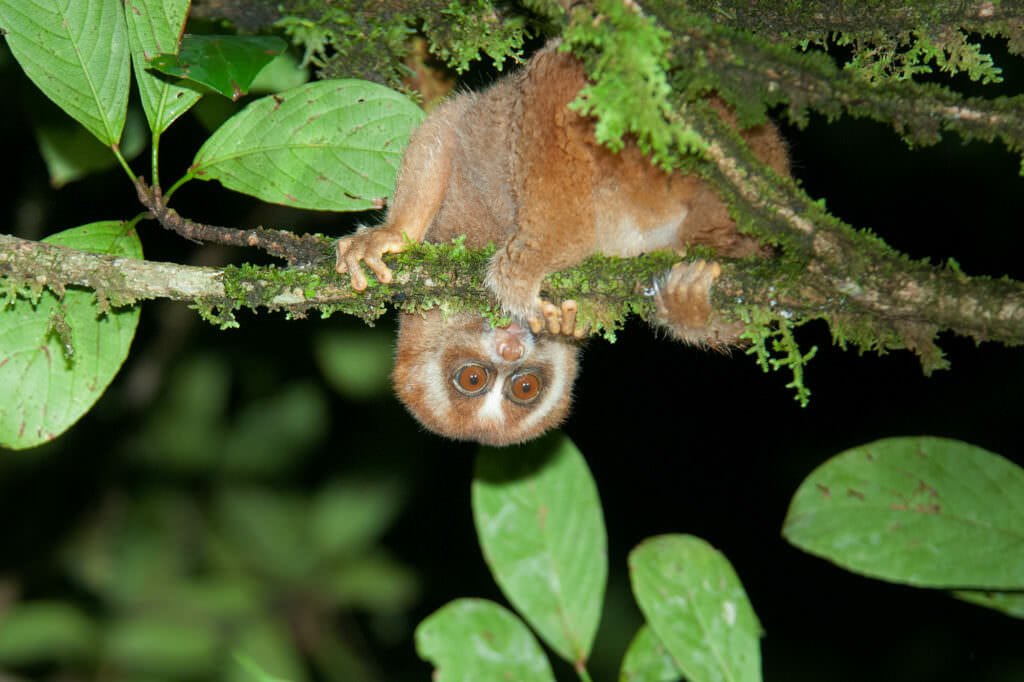 The moonless tropical night is perfectly still as we cruise along Kinabatangan river in search of nocturnal Borneo wildlife. The beam of our spotlight dances across the curtain of the ghostly dark forest on the river bank. The only sounds that break the silence are the rhythmic puffing of the boat engine and the occasional squeaks of the Flying foxes gorging themselves on fruit high up in the dark canopy.

With me in the boat are my two companions: Jo from the U.K. and Jens from Sweden, as well as our two guides: Mike, who is guiding us for our entire two weeks in Borneo (including Danum Valley and Deramakot) and Osman, our host on the river for the next two nights. Both of them, we come to believe, possess superhuman vision when it comes to finding wildlife.

Within minutes they are pointing out the usual suspects: Three-striped Palm civets, Malay civets, a Stork-billed kingfisher, and dozens of Buffy fish owls sitting on branches arching over the river like silent sentinels.

Soon Osman spots something unusual on the bank, and the mood in the boat changes dramatically. Now five pairs of eyes are glued to the centre of the spotlight beam. Mike sees the animal immediately. ‘It’s a Philippine slow loris. Very low in the tree’, he whispers excitedly, pointing out the animal’s location. We see it, too, now. What was just a pair of bright dots at first (loris’s eyes reflecting in the spotlight beam) now transforms into the cutest face imaginable.

Looking down at us with its cartoonishly large eyes, the loris appears as surprised to see us as we are to see it. We stare at each other in mute amazement.

Of all the wildlife watching hotspots in Borneo, Kinabatangan River Sanctuary in the Malaysian state of Sabah is where you are most likely to experience wildlife up close. Sadly, the reason for this abundance is that the wildlife has nowhere else to go. Pushed by the encroaching oil palm plantations, the animals are trapped in the narrow stretch of forest on the river bank. If more land is cleared, we will lose this unexpected wildlife heaven for good. But for now, the loris is safe.

We leave the loris to its nightly exploits and surprise a Buffy fish owl that has just landed on a weathered tree stump rising out of the water in the middle of the river. With its massive wings outstretched, it follows us with a piercing gaze of its huge yellow eyes that give its face a perpetually baffled expression.

The only creature that is not surprised by our appearance is the tiny and incredibly bright Blue-eared kingfisher. Perched on a thin branch overhanging the river, it lifts its head towards the dark sky and pretends not to see us drifting slowly with the current right underneath it.

Overnight we stay at Osman’s homestay. It is a large wooden house with a spacious veranda lifted on stilts over the bank of the river. Above the TV, in between Islamic calligraphy art, hang photographs of Osman with Sir David Attenborough.

The next afternoon we return to Menanggul and find ourselves in a completely different world. By day the river is bursting with life. Noisy hornbills fly overhead, Proboscis monkeys crash through the canopy, and Pig-tailed macaques squabble on the river bank while keeping a watchful eye for the crocodiles.

‘Jens, here is something for you’, calls out Mike. ‘There is a snake in the branches up ahead’. We stare at the tree he is pointing at but, unsurprisingly, see nothing.  ‘No, two snakes’, pitches in Osman. ‘No, wait, four snakes!’

Jens has been dying to see a snake ever since missing one a few days earlier, but four together seems like a bit of a stretch. Yet as we approach the tree, we are able to make out four bright yellow coiled shapes.

‘Grey-tailed racers’, explains Mike, as we watch the snakes wake up one by one and move languidly through the branches. None of us has seen anything like this before, and in Mike’s and Osman’s cases, that’s saying a lot. Are we witnessing some kind of unknown reptilian behaviour?

At night, we find another rarity – an Oriental Bay owl – a bird so rare that even Mike has never seen one before. At first, we hear its call coming from the thick jungle. Mike mimics its call, tricking the bird into believing it’s being challenged by another owl. Outraged, the bird comes to investigate, eventually landing in a reasonably open spot where we can finally see it. It is tiny and looks like most other Barn owls, yet by playing ‘hard to get’ with the bird watchers, it elevates itself to the top of their bucket lists.

The last encounter we have on the river is with a Western tarsier. A distant relative of all the other primates on the river, this animal is so strange you would think it is made out of spare parts. Its enormous eyes take up most of its face. In fact, each of its eyeballs is as big as its entire brain. Its fingers are so long that some of them reach the length of its entire upper arm. It is a little gremlin out of children’s fairy tales and an impossibly cute one at that. I see its big-eyed face in my mind long after we leave the river bank.

Before leaving Kinabatangan River Sanctuary, we visit Gomatong Cave. The first thing you always notice on entering this vast cave is the overwhelming aroma of guano (bat poop). The smell is so strong it almost brings tears to my eyes as we step into the cave. Thankfully, as soon as we walk in, we spot a magnificent Cave Racer – quite a sizable snake, with its body swollen with recently consumed lunch. After spending a few minutes with such a striking creature, we blissfully forget about the smell.

The ceiling of the cave is alive with thousands of swifts and possibly millions of bats, who are responsible for the mountains of guano covering virtually every surface below. The cockroaches, on the other hand, are in pleasantly low numbers. On my last visit to Gomatong, the walls of the cave appeared to oscillate with a writhing blanket of cockroaches that covered every surface.

When twilight finally arrives, the bats start to emerge from the cave. At first, it is just a trickle, but soon it becomes an endless stream that undulates across the sky, attempting to confuse the predators. And the predators indeed are starting to gather.

A Brahmini kite patrols the sky, a Crested Serpent eagle perches just below the mouth of the cave from which the bats were emerging, and soon, Bat hawks arrive and begin snatching flying bats with incredibly precise, swift attacks. We watch the drama unfold against the dark overcast sky until it is finally time for us to leave.

Fly from Sydney to Sandakan with AirAsia from $680 return. For more information about getting to Sukau independently, check out this excellent guide to visiting Kinabatangan River on your own.

Adventure Alternative Borneo offers a range of tour options starting from $300 for two nights for simple riverside homestay to $600 for an upscale lodge. Prices include all food and drink, accommodation and transfers from Sandakan. www.adventurealternativeborneo.com

Borneo is one of the best places in all of Southeast Asia to see wildlife in its natural habitat. And it is more fun to watch wildlife when you know what animal you are looking for. So, pick up a few wildlife guides, and have fun exploring!