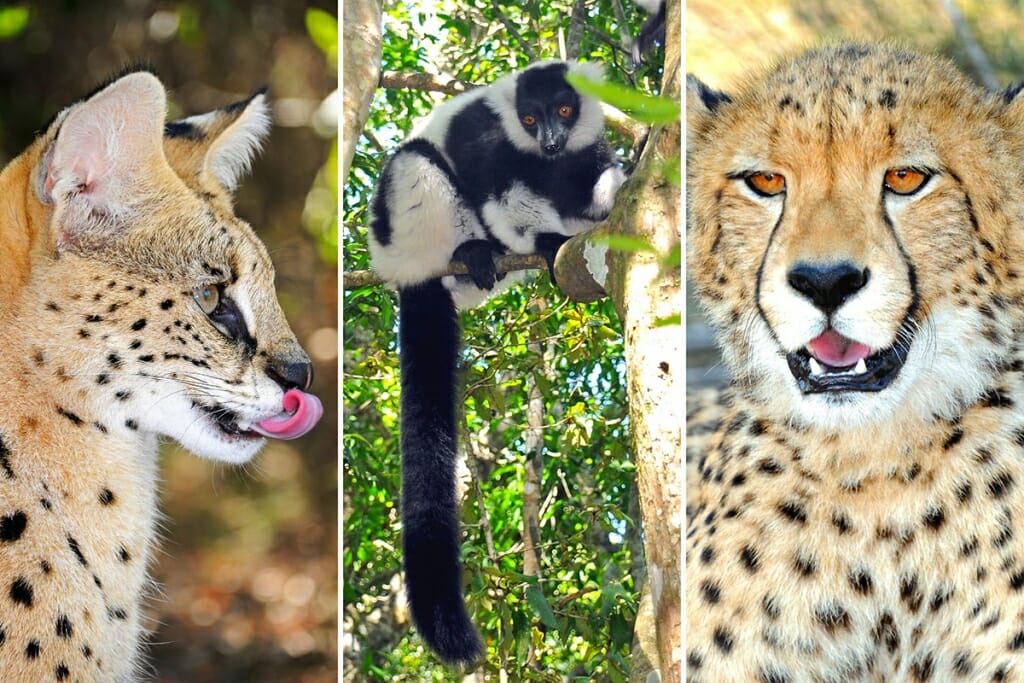 In the course of my work, I had the good fortune of visiting South Africa for a month-long road trip. The first part of the trip we spent visiting various wildlife management facilities (the work part) and the second part – in Kruger National Park (the fun part). Though considering that in Africa wildlife is abundant in practically any part of the country, the work part could hardly be considered ‘strictly business.

We started our explorations by finding spots to watch wildlife in Cape Town – one of Africa’s most beautiful cities and then continued to explore the wildlife experiences of the Garden Route.

We arrived in Cape Town in the early afternoon and went to explore the Waterfront area – eager to immerse ourselves into the new environment. The dryness of African heat was a welcome relief from the tropical moisture of Thailand.

Cape Town harbour is a busy tourist development, however some wildlife, characteristic of waterfront areas is still there. We potted a few Herring Gulls, Red-winged Starlings & Cape Cormorants. The walk around the harbour turned up a small colony of Cape Fur Seals.

Table Mountain National Park is located on the outskirts of Cape Town with the Mountain itself towering over much of the city’s landscape. The flat top of the mountain can be reached by a cable car or by hiking Table Mountain, if you have a bit more time. The mountaintop contains a very unique and extremely diverse fynbos ecosystem. However, Table Mountain is a major tourist destination that receives a large number of visitors, which makes wildlife scarce and hard to find.

The main feature of Table Mountain is the 3 kilometre -wide plateau framed by steep cliffs. This level plateau is what gives Table Mountain its name. As we walked around the top of the mountain, the landscape kept bringing to mind scenes from ‘The Lord of the Rings’ either because I watched it just before we left or because parts of New Zealand look very similar to what I was looking at.

All we managed to spot were two species of lizards: a prehistoric-looking Black Girdled Lizard and Southern Rock Agama, as well as a few Olive-breasted Sunbirds.

The first wildlife management facility we visited was Cheetah Outreach, that’s located on the Spier Wine Estate about an hour drive from Cape Town. It concentrates primarily on public education and to do so this facility regularly receives cheetah cubs from De Wildt centre for hand-raising and subsequent interactions with the public.

I took the chance of fulfilling one of my long-time dreams – to hear a cheetah purr and to feel the sound travelling through its throat and reverberating in its chest.

Cheetahs were not the only residents in the centre Malaika – a 6-month old female caracal was sharing an enclosure with two young jackals next to the Cheetah complex. This exquisitely beautiful cat with fur as soft as goose down was completely relaxed and happy to share her shaded enclosure with us for quite a while.

In terms of free-ranging wildlife, the lush green estate grounds around the Cheetah center are home to dozens of  Tree Squirrels.

Situated at the junction of two of the earth’s most contrasting water masses – the cold Benguela current on the West Coast and the warm Agulhas current on the East Coast, the Cape of Good Hope is popularly perceived as the meeting point of the Atlantic and the Indian Oceans. Geographically, however, the Indian Ocean joins the Atlantic Ocean at Cape Agulhas. But who’s counting?

The human history of Cape of Good Hope dates back to the days of stone-age hunter-gathers from around 100,000 BC, although today it is mostly popular for its wildlife and spectacularly rugged landscape.

The cliffs of Cape Point is a great place to watch Cape Cormorants as they take off from the cliffs into gale-force winds to catch fish in the ocean and return to the nest. I managed to locate one of the nests, though it came at cost of almost tumbling down the cliff – so photography was out of the question.

Other wildlife that we spotted there was: a Four-striped Mouse, Eland  (a very unusual view of a few animals grazing on fynbos with the ocean in the background), Chama baboons, Ostrich and a Cape Gull.

From Cape of Good Hope, we drove to Boulders Beach, one of Cape Town’s iconic beaches, which is home to a large protected colony of South African Penguins. Unfortunately, the beach is quite heavily developed and to watch the penguins we had to walk along the wooden bridges constructed on the beach. The sense of a natural setting was sadly lacking. Though considering that the beach is located on the outskirts of one of Africa’s biggest cities, the National Parks department did a good job of protecting the colony.

It was just as windy at the beach as it was at the Cape. The mighty gusts of wind threw the sand around with surprising ferocity. The penguins took it in their stride, keeping their eyes shut and staying low to the ground, probably to avoid being blown away. It’s a fascinating experience to watch penguins on Boulders Beach, especially if you keep in mind just how rare this sight it.

Boulders beach is, of course, not the only place to see penguins around Cape Town, especially if you would like to learn more about these odd and adorable birds. My friend put together this excellent guide on all things you need to know if you want to see penguins in South Africa with kids.

If you are in Cape Town between the months of June and December, go Whale Watching in Hermanus to see the Southern Right Whales.

Wildlife experiences of the Garden Route

We started the day by visiting Monkey Land and the Birds of Eden. These two spectacular places are built following the same concept: a large area of land is fenced off and the animals roam freely in the natural forest inside, without any enclosures.

Monkey Land is a wonder-world of cheeky primates with Squirrel monkeys, Black howler monkey Capuchin monkeys and a few familiar Asian species running amok. But the species I really wanted to see were the lemurs. And after a bit of searching, we found a group of adorable Ring-tailed lemurs and a few Black and white ruffed lemurs.

Lemurs are perhaps the most beautiful members of the primate family and they behave in the same cheeky way as most other smaller primates.

Another interesting resident at the sanctuary was Johny the gibbon. An exotic visitor from the Asian continent Johny was rescued from a life in a small cage as somebody’s pet. And since he grew up in a cage without an opportunity to climb, Johny didn’t know that gibbons spend most of their lives up in the canopy, practically never coming down to the ground. So he was happy to spend his day lying around on his back on the forest floor, despite being surrounded by hundreds of tall trees.

All in all, with its huge fence-free enclosure, a great variety of primates and a beautiful setting the Monkey land is one of the best wildlife experiences of the Garden Route, as far as captive wildlife facilities go.

Birds of Eden next door is very similar to the Monkey Land, but instead of monkeys it full of amazingly coloured birds from all over the world. It is the world’s largest free-flight sanctuary.

The diversity and abundance of birds here are overwhelming. I was particularly happy to spot the South African Knysna Turaco – one of the more unique birds of the area that we probably wouldn’t spot in the wild.

As we spent most of the time inside animal sanctuaries the only wildlife we saw outside was a Sunbird at Tenikwa, a Toad in the forest at Tenikwa when we took a couple of cheetahs for a walk, a Sparrow and a beautiful male Pin-tailed Whydah displaying in the garden of our guest house at Knysna.

Next stop was a wild cat sanctuary – Tenikwa. This small facility houses all of the smaller cats of Southern Africa: Cheetah, Serval, Caracal, African Wild Cat and Black-Footed Cat and presents a good chance to see them up close in a naturalistic setting. The guided walk takes visitors inside all the cat enclosures and if the cats are in a chatty mood, there is a good chance to interact with them.

Before leaving Tenikwa, we joined the walk to take two 10-month old cheetah cubs to the forest for a run. Anyone who walked a wild cat on a leash would know that it is a rather haphazard experience, with the animal trotting off in any direction but the one you are trying to go. Eventually, after a few false starts, we got to a nearby patch of forest where the brothers were set free to run around for about 30 min.

Young big cats always remind me more of puppies than of kittens. They are rough and boisterous with just a touch of feline grace. In fact, in a few sanctuaries we visited, cheetahs had sheppard dogs as best friends.

Being a wild cat tragic, I enjoyed meeting all the different cats in Tenikwa, especially visiting the animal’s enclosures. Although the handling of the animals was perhaps unnecessary. The experience of simply sharing the space with an animal is unique enough, and if the animal chooses to approach you, you have won the lottery. Because of the handling, Tenikwa was not one of my favourite wildlife experiences of the Garden Route, yet, it was still one of the most memorable.

From Knysna, we headed to Addo Elephant National Park for a two-day self-drive safari before moving onto Kruger National Park and surrounding sanctuaries.