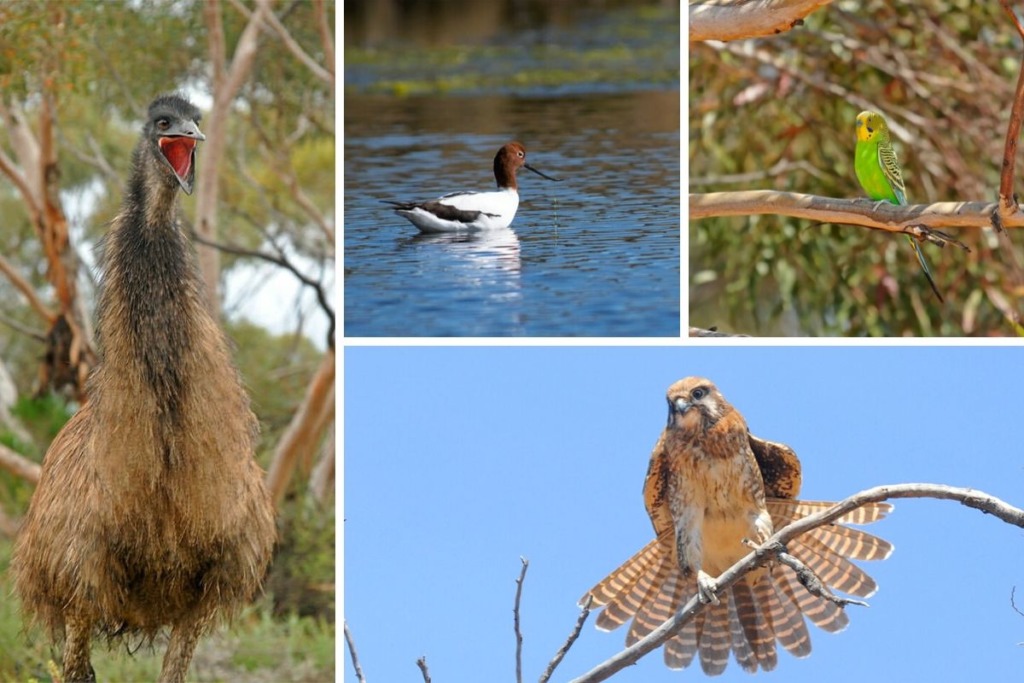 A few years ago I spent a year working at a network of wildlife sanctuaries in the Australian Outback – in the corner where NSW, Victoria and South Australia meet.

This part of Australia is much more arid than the coastal areas, but not as dry as the centre of the continent. Lying between the coast and the desert, this part of the country is home to an incredible variety of birds of Australian Outback from tiny Bee-eaters to the magnificent Wedge-tail eagle.

This post is a summary of Australian native birds that you can see in the Australian Outback without too much effort. An excellent guide to finding birds is The Complete Guide to Finding the Birds of Australia.

The Emu & the Bustard

The Emu is the largest outback bird that occurs in the drier parts of Eastern Australia. Standing over two meters tall, Emus sometimes remind me of prehistoric creatures, especially when only their long necks and small heads tower over surrounding vegetation.

Apart from their ungainly appearance emus are known for their unusual parenting system. The female’s only job is to lay the eggs, after which she departs for the greener pastures, leaving the male to look after the brood. And the males take their job very seriously.

One of the most dangerous creatures to meet on foot in the Australian bush is a male Emu with his brood of young stripy chicks. The birds get very aggressive and the sight of two meters of fury running at full speed and armed with a hard beak and strong over-sized claws quickly discourage walking excursions in the countryside.

Emus can be seen throughout rural South and East Australia. They have an unfortunate habit of running towards the rural roads, getting in front of the car and continuing to run in front of the car, effectively limiting your speed limit to theirs.

Another large bird of the Australian interior is the Bustard. It is much smaller and might I add much more grace than the emu. The bustard is harder to spot, so for the best chance of seeing one, head to Bowra Sanctuary in Queensland and look for them in the open grassy areas.

Perhaps the most distinctive birds of Australian Outbacks are the parrots. From the tiny Budgies to the great Red-tailed black cockatoos, the parrots are some of Australia’s most strikingly beautiful birds.

Most of these species can be seen throughout the area in wooded areas or in small towns. Bowra Sanctuary in Queensland is a good place to see the Pink cockatoos and the small town of Wentworth in Western NSW is good for spotting Red-rumped grass parrots.  Generally, the farm roads between Brocken Hill and Mildura are good for all these species.

If you are lucky, you may spot the rare Scarlet-chested parrot as well.

One of my favourite families of birds of Australian Outback is the birds of prey. These magnificent hunters come in all shapes and sizes from giant eagles to curious owls to tiny little nightjars.

Australia’s second-largest eagle – the Wedge-tailed eagle is a common outback bird. Most sightings of Wedgies occur at fresh kills. You would typically see several birds perched on a tree near the kill, waiting for their turn to feed.

Unfortunately, the large proportion of the kills available to the birds is the road-kill, and the birds themselves occasionally get run-over while feeding on the road.

Black kites are a common sight even in towns, while Black-shouldered kites are most abundant in the open fields. Ironically, one of the best places to photograph Black kites in flight is the rubbish tip in Mildura – a large town on the Victorian side of the border.

Another two common raptors are Brown falcon and Nankeen Kestrel. The Brown Goshawk and the Collared Sparrow Hawk are very similar in appearance and both can be found in wooded areas.

An excellent place to see the birds of prey is Flinders Ranges National Park in South Australia.

The night shift is represented by Barn Owls and Boobooks as well as Tawny frogmouths, Spotted nightjars and Australian owlet-nightjars. The owlet-nightjars have such unusual faces that they look more like mammals than birds.

Most of the night birds of prey I’ve seen were on the approach road to Scotia Sanctuary in Western NSW. The sanctuary is closed to the public, but the farmland around the sanctuary is great for spotting owls and nightjars.

Songbirds of Australian Outback are as numerous as they are diverse. The common species in the Outback are Red-capped robin, Splendid Fairy-wren, Restless flycatcher, Golden whistler, Southern whiteface, Chestnut-crowned babbler, White-browed babbler.

Songbirds are the most abundant birds and therefore most frequently seen. The wooded areas around Wentworth town in NSW are good for the majority of these species. Another good spot for songbirds is Etiwanda Wetlands in Mildura.

Apart from the Passeriformes, some of the most brilliantly coloured birds in the Outback are the Rainbow bee-eater and the Red-backed and Sacred kingfishers.  I have seen both the Bee-eaters and Kingfishers at Wallpolla Island in Wentworth.

This may come as a surprise, but there are plenty of waterbirds in the Australian Outback. Especially, in years of above-average rainfall when the dams and waterholes fill up with water and remain full throughout the summer, providing habitat for water-loving species.

Species living in arid environments know all about taking advantage of favourable conditions and often respond to wetter than usual weather by congregating in huge numbers around the temporary water bodies.

Dotterels, Black-winged stilt, Grebes, Teal, Wood ducks and Black swans – all hurry to raise their litters of chicks to take advantage of the temporary abundance of food. Even such rarities as Red-necked avocets can be spotted in the dams of the arid Western NSW.

There are a number of good spots to see the waterbirds in the Outback: Etiwanda Wetlands, Wallpolla Island in Wentworth and of course, Bowra Sanctuary. However, almost any temporary water body is likely to turn up a few species. There is no wasting of valuable resources in arid Australia.

One of the more threatened and therefore rare birds of Australian Outback is the Malleefowl. In appearance, they look to me like glorified chickens, but these birds display some very interesting nesting behaviour.

As with Emu, the female’s sole role in the process is laying the eggs. But instead of following the conventional trend of sitting on the nest to incubate the eggs, the male of this species construct great mounds out of leaf litter, twigs and other various organic matter.

All around the mound you can see the trails where the birds dragged twigs and clumps of leaves and grass to their mound.

The process starts with a male digging a large hole in the ground. Then he proceeds to fill it with all sorts of organic matter that will gradually decompose and generate heat that will be used to incubate the eggs.

When the male is satisfied with the temperature inside the mound, which by now has reached over half a meter above ground in height, he excavates egg chambers where the female deposits her eggs.

After that, the male keeps maintaining the mound, regularly adding more organic matter to intensify decomposition or scraping some off to cool off the eggs on particularly hot days.

Malleefowl is a threatened species and it is quite difficult to see. Even after working on the sanctuary with an active Malleefowl mound, I have only seen the birds on photographs from the camera traps.

Other birds of Australian Outback that will frequently spot in your travels through rural NSW are Masked, Black-faced and White-browed woodswallows that congregate in huge flocks in summer, as do Common bronzewings.

Look for movement in the shrubs in grassy woodlands and you may spot a Little buttonquail darting across the open patches.

To see the birds of the most arid part of Australia, you will need to head to the country’s red centre. Old Andado station on the edge of the Simpson Desert is an excellent place to see the birds that live in some of the harshest conditions in Australia.

Another dramatic bird-watching destination in Central Australia is the Western MacDonnell Ranges, where you can spot the magnificent Red-tailed black cockatoos as well as Budgies, Dusky grasswrens, Crimson chats as well as birds of prey.

Kings Canyon and Uluru are good for spotting Mistletoebird, a few species of Honeyeaters, Spinifex doves, zebra finches and woodswallows.