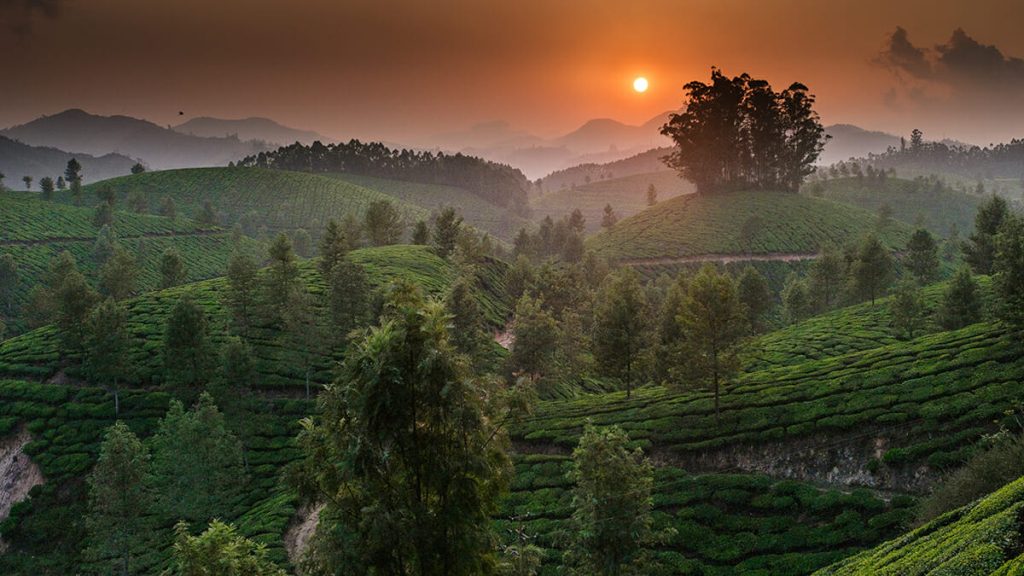 The southern part of Kerala is home to the Western Ghats mountain range – one of the world’s Biodiversity Hotspots with 139 mammal species, 508 bird species and179 amphibian species protected within its national parks and reserves. Take a  wildlife watching trip to one of these reserves, see some magnificent wildlife in Kerala, and you will understand why Kerala is often referred to as God’s Own Country or the Favourite Child of Nature.

Stretching between the hills of Cardamom and Pandalam, about 4-hr drive from Kochi, Periyar National Park, is the largest tiger reserve in India.  The vegetation in Periyar is dominated by savannah grassland – perfect open habitat for spotting wildlife.

Periyar is an important tiger and elephant reserve. A total of 35 Bengal tigers were recorded in the park during the 2017 census. The best time to see elephants in Periyar is the dry months of March and April when the elephants congregate out in the open near the watering holes.

There is of course more to Periyar than tigers and elephants. The park is home to 35 species of mammals, 266 species of birds and 45 species of reptiles. You can explore Periyar’s wildlife on jeep safaris, a night walk and on boat trips on the scenic Periyar Lake.

Located in the Nilgiri hills and surrounded by steep ridges and escarpments, Silent Valley National Park enjoys a tropical rainforest climate round the year. It is a part of the Nilgiris Biosphere Reserve and home to an incredible diversity of vegetation species. At least 1000 species of plants have been recorded in the park. Such a high diversity of vegetation types makes the Silent Valley a paradise for birds. Birdlife International lists16 threatened species among more than 200 bird species found in the park.

However, the main reason for establishing Silent Valley as a national park was to protect India’s largest population of the endangered lion-tailed macaques.

Apart from the macaques, the park provides habitat to 34 species of mammals including the lion-tailed macaque, Nilgiri langur, Nilgiri tahr as well as the rarely-seen tigers and leopards. For best wildlife watching opportunities, visit between December and April.

In fact, there is so much wildlife in the park, that the government closed the nearby old road closed to avoid vehicle collisions with animals.

Characterized by rugged terrain, Pampadum shola enjoys misty and cloudy climate throughout the year. The best time to visit the park is during the dry season between December and March.

Kerala’s first National Park and a UNESCO World Heritage Site, Eravikulam National Park is home to southern India’s highest mountain peak, Anamudi. The slopes of Anamudi provide rich habitat for the endangered Nilgiri Tahr, a species of mountain goat endemic to the Nilgiri Hills and the southern portion of the Western Ghats.

Other wildlife you can spot in Eravikulam include tigers, leopards, gaur and Nilgiri langur. Overall, the park is home to 26 species of mammals, 132 species of birds and 19 species of amphibians, not to mention the spectacular scenery of the Western Ghats.

And to top it off, Eravikulam has its own endemic flowering plant – neelajurinji, that flowers only once every 12 years. The next flowering season is not until 2030, so there is plenty of time to plan a trip.

Nestled between Anamalai and Nelliampathy hills, Parambikulam Tiger Reserve protects 39 species of mammals, 268 species of birds, 61 species of reptiles and 16 species of amphibians.

The park is home to a growing tiger population and the best place in Kerala to see the Indian bison, commonly known as gaur.

Some of the other mammals you can spot in the park include the lion-tailed macaque, Nilgiri tahr, Asian elephant, Indian leopard, wild boar, sambar deer, bonnet macaques, Nilgiri langur, sloth bear and Nilgiri marten.

The interesting thing about Parambikulam is that it is also home to an indigenous tribal population. The locals live within the reserve and work as trekking and safari guides.  Parambikulam is an excellent example of sustainable living in a fragile ecosystem.

Although at 53 square kilometres, Peppara is one of the smallest protected areas in Kerala, it packs quite a punch in terms of natural attractions. A part of the Agasthyamalai Biosphere Reserve, Peppara gives its visitors an opportunity to encounter large herds of elephants, leopards, wild dogs, sloth bear and possibly the exclusive Nilgiri Tahr within its small confines.

The birdwatchers will have a chance to spot the Malabar grey hornbill in Peppara. While the trekkers can hike across the rocky terrain to the Bonafall and Kalarkad waterfalls.

Unlike most of Kerala which receives copious amounts of rain throughout the year, in Chinnar Wildlife Sanctuary it only rains for a couple of months. The drier climate in Chinnar promotes thorny scrub vegetation which is the ideal habitat for the endangered grizzled giant squirrel, whose numbers today stand at less than 200.

The unique ecosystem of Chinnar is also home to the Nilgiri tahr and the rusty spotted jungle cat. And reportedly, you can easily spot large herds of bison and elephants on the side of the road when travelling to Chinnar from the nearest town of Karumathi.

The Sanctuary is also home to Kerala’s largest population of the mugger crocodile, as well as 51 other reptile species including 29 snakes.

Also referred to as Wayanad Wildlife Sanctuary, Muthanga is the second biggest wildlife sanctuary in Kerala. It is part of a wildlife migratory corridor that connects Bandipur and Nagarhole parks of Karnataka with Mudumalai in Tamil Nadu. The sanctuary is part of the Nilgiri Biosphere Reserve and one of the few places in India, where you can spot two of India’s Critically Endangered vultures: white-rumped vulture and red-headed vulture.

Established in 1958, the Peechi-Vazhani Wildlife Sanctuary is the second oldest in Kerala, formed in the catchment area of the Peechi and Vazhani dams. The vegetation comprises of mixed deciduous forest, making it a good habitat for bison, elephants, deer, leopard, tiger and a bounty of bird and reptile species.

When visiting the sanctuary, you can opt for a boat ride on the picturesque artificial lake or for a treck through the wilds of Peech-Vazhani.

Located in the southeast part of the Western Ghats, the 138 square kilometres Neyyar Wildlife Sanctuary lies just 32km away from the city of Thiruvananthapuram and overlooks the Neyyar dam.

Kerala has two international airports: Kochi (often spelled Cochin) and Trivandrum. Which one you choose will depend on where you wish to start and end your trip.

Driving in India is not an experience for the faint-hearted. It is best to pre-arrange all your transfers with your hotels. If you wish to venture into any of the national parks independently, it is best to book a car and a driver through your tour operator.

Kerala has a monsoonal climate with the wettest months between May to October. The best time to visit the state is between November and March.

Have you travelled to Kerala? Share your stories and insights in the comments below.