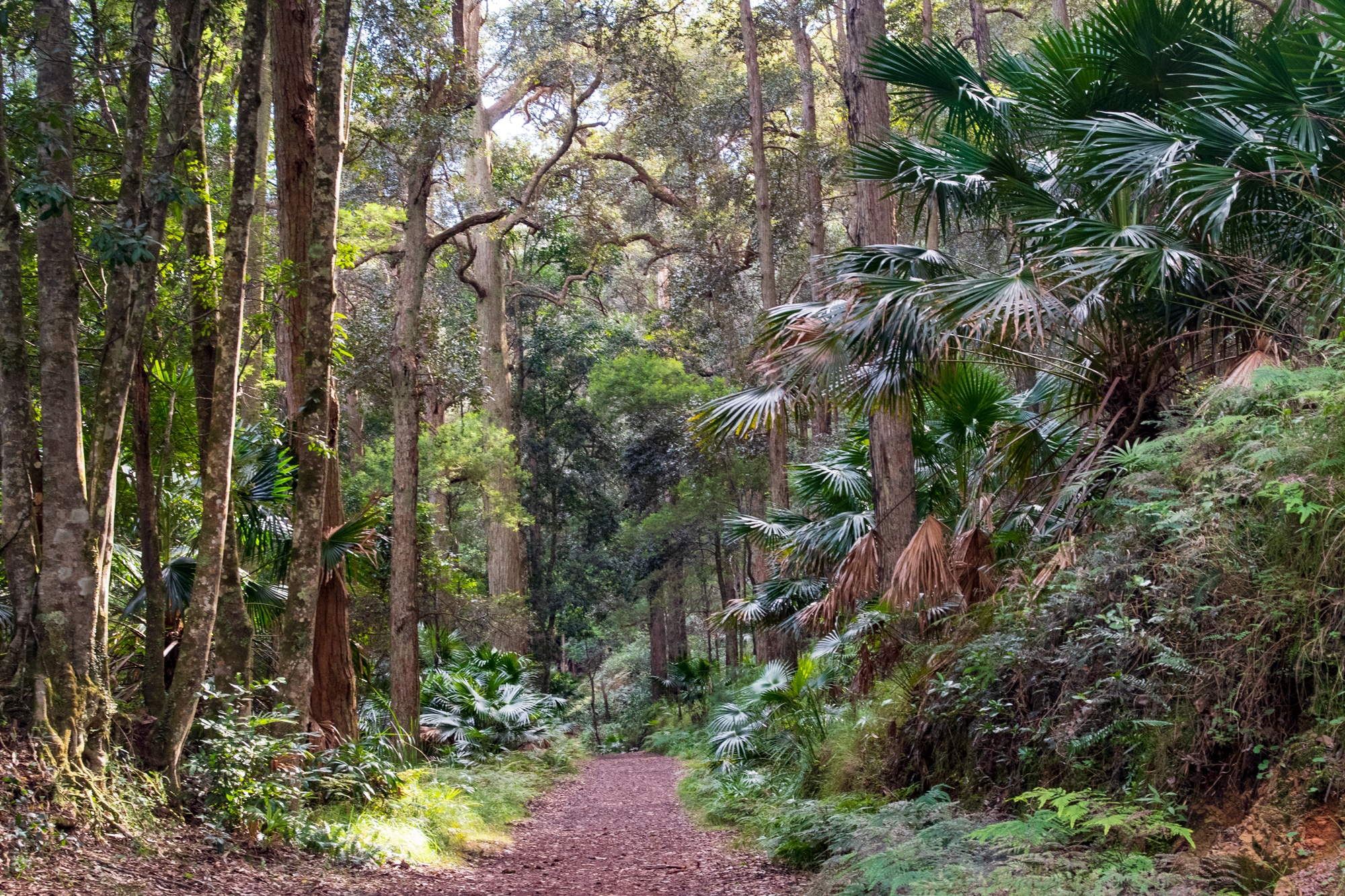 The southern end of Lady Carrington Drive in Royal National Park is probably the best section of the temperate rainforest that can be easily accessed in the park. It is an incredibly atmospheric forest with moss-covered logs, towering tree trunks, bird’s-nest ferns, and a palm tree understory. It is also one of the best places in the park to look for lyrebirds and some cool rainforest birds like the adorable logrunners.

We explored the southern end of Lady Carrington Drive walk on one of our adventures with Steve – our ‘wildlife whisperer’ friend, which meant that we did find the lyrebirds, the logrunners, an owl roost, and a handful of other birds. Given that Steve is a professional wildlife guide, every walk with him in Royal is a wildlife watching experience.

Opened in 1886, seven years after the national park was declared, Lady Carrington Drive was originally a 10-km unpaved scenic carriageway connecting Audley with the southern section of the park, east of Waterfall Station. Later the road was closed to traffic and today it serves as a management trail and a walking and cycling track.

The entire Lady Carrington Drive is 9.7km long, about a 3-hr walk (1.5hr cycle). And unless you have two cars, or booked a Park Connect shuttle out of the park at the end, you’ll have to walk 9.7km back to your car.

There are also a couple of interesting side trails in this section of the walk – the Forest Path and Palona Cave Trail that give more opportunities to explore this gorgeous patch of forest.

We walked to Calala and back taking time to see the birds and explore some of the rainforest along the sides of the trail. We did venture out about a kilometre past Calala to check out a rumoured Powerful owl roosting site, but the forest becomes drier the further north you go, so for the best rainforest experience, I would say Calala is the logical turnaround point. And here is what to expect from walking the southern end of Lady Carrington Drive.

Once you park on Sir Bertram Stevens Drive, walk through the gate and you are on Lady Carrington Drive. The trail follows a wide dirt road heading gently downhill and gradually entering deeper into the rainforest. As the trees become taller and the forest denser, bird calls fill the air.

Soon you pass the first sign for ‘The Forest Path’ on your left and after a few hundred meters, the sign for Walumarra Track, on your right. If you have the time, Forest Path is the perfect addition to walking Lady Carrington Drive track. More details are in this guide to Forest Path.

The next intersection is where the Forest Path meets the road again. Keep an eye out for the birds as you walk here. We spotted a Green catbird where Bola Creek came near the road and while we were trying to get a better look at it, a pair of King parrots landed in the nearby trees, while Sulphur-crested cockatoos were going absolutely bananas somewhere out of sight.

After you cross Bola Creek, the trail climbs steeply for a couple of hundred meters and then levels out again and continues undulating through the forest for about 800 meters before meeting the ‘Limestone Cave’ turn off.

It is quite a rustic sign that makes the trail appear disused. But this trail is actually quite good. It leads to Palona cave – a beautiful rock overhang with a small waterfall running through it.  It’s about a 1-1.5hr walk from Lady Carrington Drive.

The forest in this section reminded us of the Dorrigo rainforest – tall trees, thick ferns, moss-covered logs on the ground, dim light and the faint smell of wet leaf litter.

A few weeks back Steve discovered a nest of logrunners here and we were keen to try to find the birds. The nest however looked to be no longer occupied. But we were hopeful the family was staying somewhere nearby.

We followed the trail as it crosses Palona Brook listening out for the logrunners quail-like call and for the scraping sounds in the roadside bushes. But all we heard were the mimicking songs of the courting lyrebirds.

The surface of the road was covered by the lyrebird scratchings and soon we spotted the birds themselves. First a female then a male trotted across the trail just ahead of us and ducked into the undergrowth. As hard as I tried to be prepared, I wasn’t quick enough to properly photograph them and only caught the retreating back end of the male and his magnificent tail.

We watched the birds for a while as they scraped the leaf litter in the undergrowth. Soon they were joined by the Eastern whipbirds. We’ve been listening to their whistles since the start of the trail. It was nice to see the birds themselves for a change.

About 500 meters from Palona Brook, the road crosses another creek, ‘Burunda Brook’ and there is a large fallen tree lying by the side of the road. I was photographing some colourful fungus on the trunk and heard some scraping sounds in the bush. It was too quiet for a lyrebird but too loud for a lizard.

I slowly made my way into the thickets and saw a couple of brownish blobs moving about on the forest floor – the logrunners. There was too much vegetation between us for me to see clearly. Surprisingly, the birds didn’t flee and allowed to me approach them quite closely. I had a good look at the male and caught a few glimpses of the female (in logrunners’ world, it’s the female who’s the pretty one).

I couldn’t get a clear shot of either bird but I didn’t want to go tearing after them through the bush so I let them wander off deeper into the forest thankful for a chance to see them.

From the Burunda Brook crossing the road continues for about 1 kilometre to arrive at Calala clearing.

There is a great old cedar tree growing on the edge of the clearing and Steve pointed to a small orchid clinging to one of the tree’s branches. Evidently, this is the only orchid of this species found in Royal National Park. No one has found them anywhere else in the park.

Most of Calala clearing is taken up by the remnants of a big old oak tree that was cut down some time ago. The stump is still standing, now covered in fungi and lichen. The branches are spread across the clearing half-buried in a layer of ferns and grass.

The picnic table at Calala is right by the Hacking River and you can walk down to the water. If it hasn’t rained recently, you can walk along the sandy bank for a couple of hundred meters if you feel like a change of scenery from the road.

Calala is a good point to turn around and start walking back. It makes an 8.6km return walk. But Steve knew of a Powerful owl roosting site about a kilometre further north so we went to investigate.

The roost is located under a rock overhang and it takes a bit of a scramble to get to it. We didn’t want to flush the owl by making a racket as we scrambled over the rocks. So Steve went to investigate and came back to report that the owl was not at home, but the rocks underneath its roost were littered with remnants of its meals, including a handful of sugar glider skulls. We spent over an hour searching for sugar glides on a nocturnal walk at Audley a few weeks ago and only found one. This owl is obviously much better than us at locating these guys.

How to get to Lady Carrington Drive (south)

Car: You can drive right to the start of the southern end of Lady Carrington Drive off Sir Bertram Stevens Drive and park at the Forest Path car park (Google maps pin). The northern end of the drive is easily accessible at Audley.