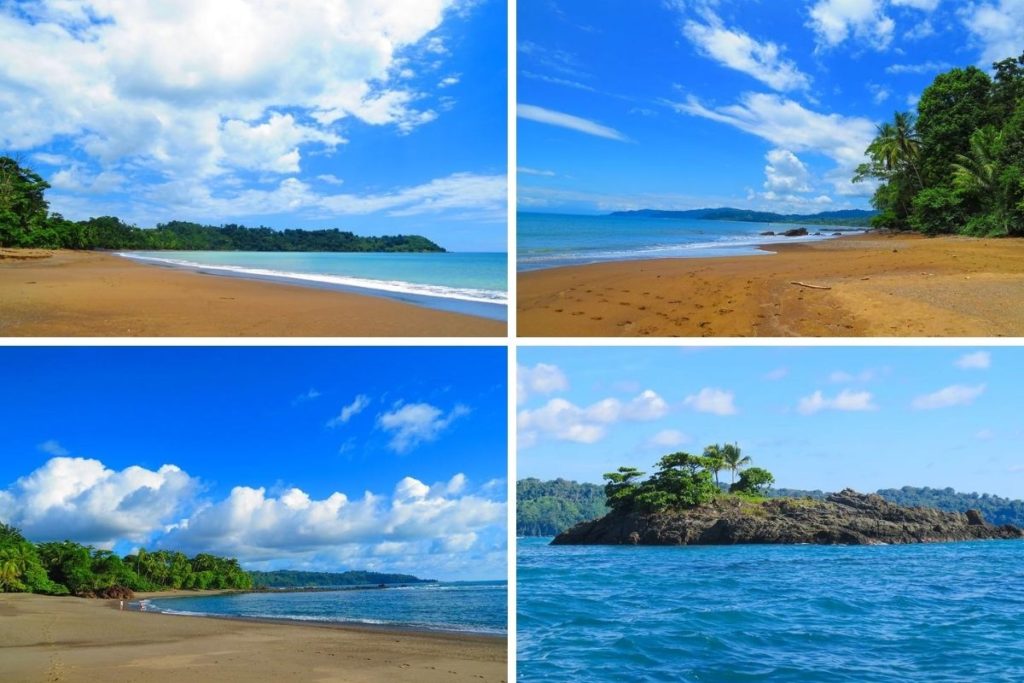 Lying on the pacific side of the remote Osa Peninsula, Drake Bay, or Bahía Drake, as Ticos call it is a tranquil little town with idyllic beaches and plentiful wildlife. It is known mostly as the departure point for Corcovado National Park that takes up almost a third of the Osa Peninsula and is considered to be one of the most biodiverse environments on earth.

We also came to Drake Bay on the way to Corcovado, and to do some whale watching, but within minutes we were in love with this gorgeous little town.

Drake Bay may not be a dream destination for everyone, but if you are looking to get away from it all, while away your days in a hammock, laze around on sheltered beaches, and see Costa Rica’s wildlife, Drake Bay might just become one of your favourite places in Costa Rica.

How to get to Drake Bay

Getting to Drake Bay is part of the adventure. The town can be reached by plane, boat, or car.

The plane is the quickest but most expensive option. A number of airlines offer flights from San Jose to Drake Bay’s new airport. Expect to pay in excess of $100 each way.

During the dry season, it is possible to drive to Drake Bay. There are three river crossings involved so you definitely need a 4×4.

The most fun way of getting to Drake Bay is by boat. You can either drive or catch a bus to the town of Sierpe from where the boats depart for Drake Bay twice a day from the dock next to La Perla del Sur Hotel. The departures are advertised as 11.30 am and 4 pm. But in reality, these times are quite flexible – the boats leave when their captains decide that they sold enough tickets.

The boat ride takes about an hour and travels through the Térraba-Sierpe mangrove forest park and then continues along the stunning coastline.

Our boat ride was practically a mangrove tour in itself, which was great for those of us who haven’t seen the mangroves before. The rains that made the road to Drake Bay all but impassible also flooded the forest that we were sailing through. We were literally cruising through a flooded forest like you do in the Amazon or in Australia’s Kakadu National Park. We even got to do some wildlife watching on the way spotting a few herons and crocodiles.

Once we cruised out of the forest and into the ocean, the ride became more of a wild adventure than a relaxing cruise. The boat rocked on the large swells as the waves crashed onto the rocks jutting out of the water between our navigational path and the shoreline.

Thankfully the boat driver was an expert seaman and navigated the waves with such skill that he got a wild round of applause from everyone on board. It must’ve been the adrenaline from what some of us considered to be a near-death death experience. But that was before we experienced the boat ride to Corcovado, but that’s a different story entirely.

So, if you ever wondered if, Costa Rica is safe to travel around, the answer is yes, but wear a life jacket!

Drake Bay is one of the best places to witness the Humpback whale migration in Costa Rica. Whales travel to these waters from the south, as far as Antarctica, and from the north, from USA and Canada

The best time to go whale watching in Drake Bay is from mid-July to October when the whales migrate from their feeding grounds in Antarctica to their breeding grounds in the tropical waters of the Osa Peninsula. This is a good time to see newborn calves travelling with their mothers.

From November to April you get to see the whales travelling from northwest USA and Canada. This is supposed to be a less plentiful migration, although whales are still frequently seen.

We booked our tour with Divine Dolphin and since we were a group of nine, we had the boat to ourselves. We left from the main beach in Drake Bay around 8 am and within half an hour our boat was surrounded by a large pod of Pantropical spotted dolphins.

These adorable cetaceans stayed with us for about 15 minutes, riding the bow wave of our boat. There was a very young dolphin among them that was always surrounded by protective adults. It is not uncommon to see huge pods of Pantropical spotted dolphins close to shore, though our pod had maybe three dozen individuals.

Other commonly-seen dolphins include Spotted Dolphins, Bottlenose Dolphins, Spinner Dolphins, Common Dolphins and Roughtooth Dolphins. But since it was a whale watching tour, our captain was keen to find us the whales, rather than specifically look for more dolphins.

The captain’s efforts paid off and about half an hour later we came across a female Humpback whale with a young calf. We followed them for a while, keeping a respectful distance away, but the whales decided to keep a low profile and stayed mainly below the surface. Although they did approach the boat quite closely a couple of times and we could see their white bellies even through the water.

Humpback calves are born in tropical waters and weigh about two tonnes. Each day they consume up to 600 litters of mother’s milk. And humpback’s milk contains a whopping 60 per cent fat.

The newborn calves need all the nutrition they can get. Their main job is to fatten up quickly for their first journey to Antarctica or towards the Arctic Circle in a few months’ time.

Once the whales disappeared, we headed to a deserted beach where we spent about an hour chilling and exploring. That hour on the beach was perhaps the most relaxed hour of our entire Costa Rica journey. With not a soul on the beach, it almost felt like we were shipwrecked on a deserted island.

We returned to Drake Bay around 1.30 pm and spent a lazy afternoon watching Scarlet macaws from our hammocks. On the way to dinner, we spotted a Variable seedeater and a very excited Cherrie’s tanager that was flirting with a side view mirror of a parked truck.

If you are a keen birdwatcher, you should take the Morning Bird Walk. The walk starts at 5:30 am and lasts about 3 hours. You can expect to see a wide variety of species including Yellow-throated Toucans, Golden-naped Woodpecker, Charming Hummingbird, Black-cheeked Ant-tanager (Costa Rica endemic), Scarlet Macaws, Spot-crowned Euphonia, Riverside Wren, Chesnut-backed Antbird, and Mangrove Hummingbird.

If you are not an early riser, then the Night Walk is for you. Departing at 6 pm for 2.5 hours, the Night Walk is the perfect opportunity to see some of Costa Rica’s famous Poison arrow frogs, adorable tree frogs, opossums, kinkajou, anteaters, as well as lizards, snakes and many cool insects.

Caño Island is one of the best diving and snorkelling sites in Costa Rica. The island is located at the crossroads of two ocean currents and acts as a rest stop for many migrating marine species. Apart from whales and dolphins, you can see White-tipped Reef Sharks, rays, Grunt fish, sea turtles and a plethora of colourful reef fish.

Drake Divers offer a range of diving and snorkelling tours on Caño Island, about 1-hr by boat from Drake Bay.

If the laid back atmosphere starts to feel too relaxed, get your blood pumping on a Canyoning and Rappelling Tour. This 6-hour adventure includes a hike through stunning primary rainforest to Tanadua Biological Station, rappelling into a canyon, diving in the river with many waterfalls. This tour does require a decent level of fitness and a spirit of adventure.

For a more low-key adventure, consider hiring a kayak and exploring the waterways around Drake Bay. You can hire kayaks at Drake Bay Wilderness Resort or Aguila de Osa Inn.

Depending on your interests you could pedal to the famously idyllic San Josecito Beach or to the nearby Cocalito beach. Alternatively, for a calmer trip explore the Agujitas River. Whichever route you choose, you are likely to see a variety of wildlife species including kingfishers, Tiger-herons, Night-herons, toucans, Black hawks, and if you are lucky, you can spot Howler and Spider monkeys, White-faced capuchins, and even River Otters.

Where to stay in Drake Bay

For a small and remote town, Drake Bay has a an incredible variety of accommodation, including some of the most luxurious eco lodges in Costa Rica.

If you want to wrap yourself in comfort, concider Copa De Arbol Beach & Rainforest Resort. Set in a rainforest setting these stunning cabins are less than 100 meters from the beach. Another stunning property is Drake Bay Greenleaf that offers a variety of beach view or jungle view bungalow with stunning terraces.

In mid-range category, the family-run Sunset Lodge offers ecologically-built wooden bungalows furnished with handmade rustic furniture. While the beach-front The Sunset Tucano Lodge is perfect for those who would like to get away from it all in a secluded location.

For budget-friendly options, check out the quiet Encanto Lodge with its spacious rooms and comfortable beds, and Hotel Casa Gitana Corcovado famous for its delicious food.