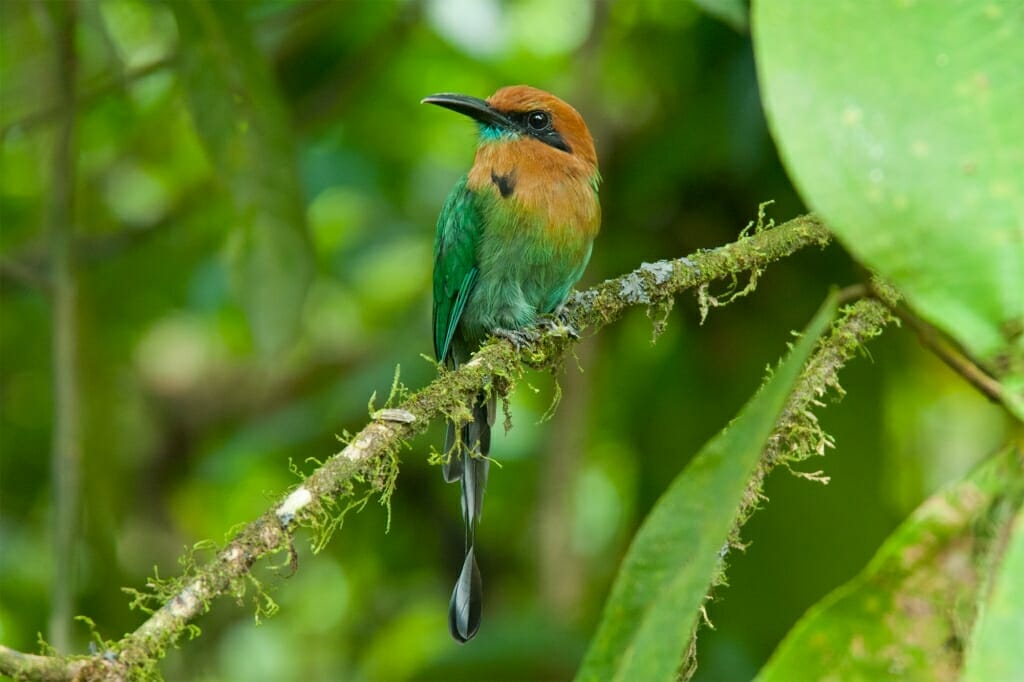 One of the main reasons we visited Costa Rica’s north-eastern lowlands, as part of our wildlife watching itinerary, was to see the Honduran white bats at Tirimbina Reserve. Sadly, the bats roosting habitat in Tirimbina was destroyed by the recent floods and no one knew where the bats relocated to.

Luckily, the guide on the spotlighting walk at Tirimbina suggested visiting the nearby La Selva Biological Station, where the bats are also often seen. This gave us the perfect excuse to do some wildlife watching at La Selva.

We drove to La Selva after lunch and once we were assigned a guide, we promptly told him of our wish to see the bats. He seemed to know exactly where to go. We followed him along a well-maintained path into the forest and almost straight away spotted a young Mexican porcupine well concealed on a branch over the trail.

Further along, we came across very photogenic Broad-billed Motmot – one of the most adorable birds in Costa Rica.

Once we reached a particular spot on the path, the guide lead us off the trail to a Heliconia plant where a family of eight white fluffy bats was roosting under a large leaf. Honduran white bats at last.

We didn’t stay long so that we wouldn’t disturb the bats, but it was great to see them. They are by far the best-looking members of the microbat family.

Another pleasant surprise at La Selva was the Black and greed poison frog. Not much bigger than the Strawberry poison frog, it is almost as colorful.

During the walk, we quickly realized that there is more to wildlife watching at La Selva Biological station, than Honduran white bats.

After a quick lunch in town and some more bird-watching at Tirimbina,  we returned to La Selva for the night walk. It started off slowly – Bullfrogs, Common Mexican tree frog, Common rain frog and a few sleeping insects.

What I wanted to see the most was the Red-eyed tree frog. This species is usually quite common at La Selva, but it’s been avoiding us all night. Eventually, I picked up an eye-shine halfway up a tree that turned out to belong to the critter we were looking for. Given it was the only representative of its kind, we spent a bit of time adoring the striking markings on its sides and thighs and the bright orange webbing on its feet.

We only spotted one mammal on the night walk at La Selva, but it was a species we haven’t seen before – a Common opossum so we were thrilled to see it.

La Selva Biological Station can be reached by car – it is about a 2-hr drive from San José airport. The closest major town to La Selva is Puerto Viejo – 7 km away.

Most people visit La Selva for a Jungle Walk or a Night Walk.  These can be booked on the spot at the station’s visitor centre.