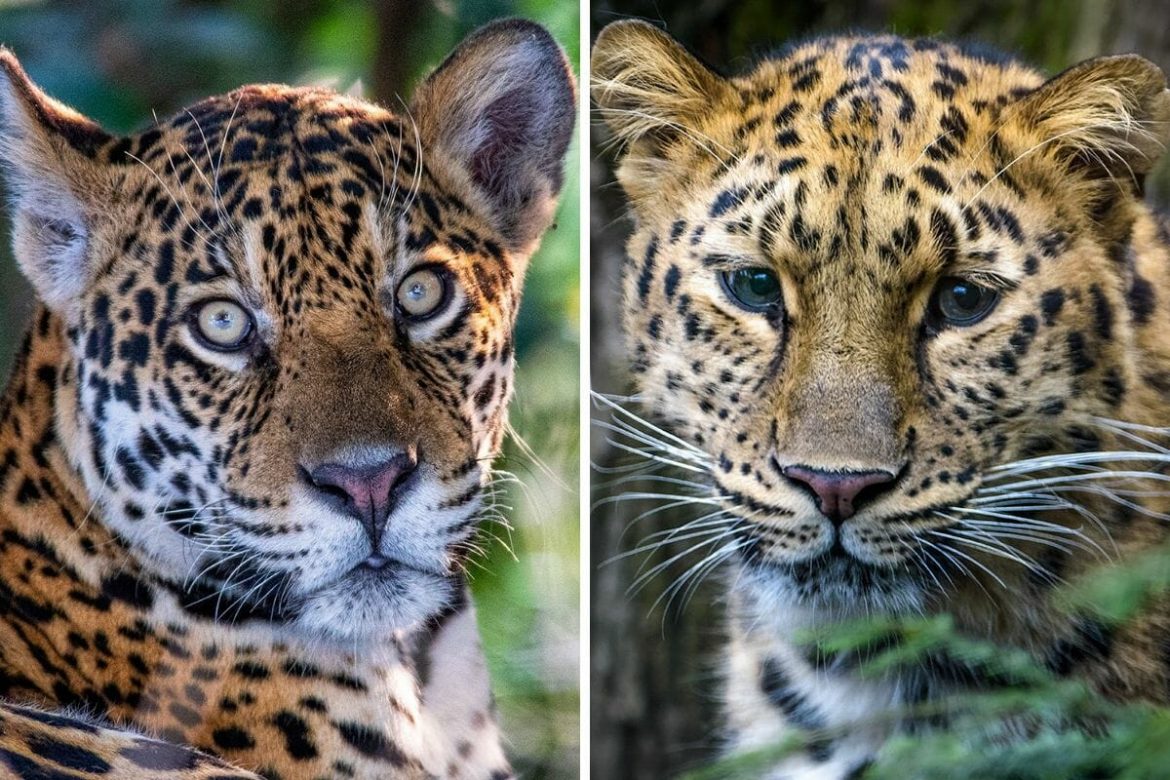 Jaguar vs leopard –  the two magnificent spotted big cats that are so similar in appearance, most people find them indistinguishable. But can you learn to tell them apart? Well, the good news is, you will never have to guess which of these two cats you are looking at in the wild. This is because Jaguars and leopards live on different continents.

If you are in Latin America, the only big cat you can come across is the jaguar.

And if you see a spotted big cat in Africa, Asia, the Middle East or Russia, it will be the leopard. Unless, of course, you are lucky enough to spot the snow leopard in the Himalayas, but these cats are instantly recognizable by their thick, smoky coats. And cheetahs in Africa have a much slighter body shape. If you are curious about cheetahs, check out my guide: Cheetah vs Leopard – How to tell the two cats apart.

However, while you’ll never have to guess which of the two large spotted cats you are looking at in the wild, the jaguar and the leopard become quite difficult to tell apart when taken out of the geographical context. So, what is the difference between jaguar and leopard?

In this post hide
1. The body shape
1.1. Jaguar and Leopard Size Comparisson
1.2. Is Jaguar stronger than a Leopard?
2. The head
3. The tail
4. Coat pattern
5. Is Black panther a Jaguar or a Leopard?
6. Top predator vs Intermediate predator
7. Man-eating
8. Swimming and Love of Water
9. Speed
10. Population
11. Conservation Status
12. Where to see jaguars and leopards in the wild
13. Jaguar vs Leopard Self Quiz
14. More about Wild Cats

The main physical characteristic in which the two cats differ is their body shape. The jaguar is stockier and more muscular than the leopard, with a shorter body, shorter legs, and a broader chest. It also tends to have a large barrel-like abdomen. Male jaguars, in particular, often look as if they swallowed a truck tire or have miraculously fallen pregnant, like the animal on the image below taken in the Brazilian Pantanal.

The leopard is much more delicately built than its South American cousin. It has a more slender and longer body, longer legs and generally has a lighter appearance. However, despite its light frame, the leopard is very strong and can drag large carcasses of its prey up a tree.

Is Jaguar stronger than a Leopard?

Considering that the jaguar has a more solid, more muscular built, it is a stronger cat of the two. It also has the most powerful jaw muscles among big cats allowing it to crush the bones of its prey with a single bite.

However, the leopard is not a lightweight either. It can drag carcases of its prey, which could be 3 times the leopard’s weight, up into the trees away from other predators and scavengers.

Another way to tell the difference between jaguar and leopard is by looking at their heads. Just like their body shape, the size and shape of each animal’s head are quite different. Jaguars generally have large heads with a broad forehead, wide jaws and round shape to their faces. In comparison, leopards tend to have smaller and more delicate heads.

The differences in these cats’ heads are easily explained in terms of hunting technics. As I already mentioned, the jaguar has the most powerful bite in relation to body size among wild cats. It uses its powerful jaws to crush the skulls of its prey. You may have heard of jaguars hunting caimans in the Pantanal by occasionally crushing the reptiles’ skulls.

While the leopard kills its prey by the suffocating bite to the throat (in case of larger prey) or to the back of the neck (with smaller prey).

Another physical difference between jaguar and leopard, the length of their tails can also be explained by their habits. The leopard has a longer tail, necessary for keeping balance when climbing trees. Jaguars are also good climbers, but their short tails hint that they are not as agile in the trees as the leopards.

And the reason the jaguar doesn’t need to climb as much is that it doesn’t have any natural predators. As the only big cat in the Americas, the jaguar reigns supreme in its habitat and doesn’t have to drag its prey up into the trees.

Leopards, on the other hand, have to protect their diners from other predators, like lions, hyenas or tigers, depending on where they live.

Perhaps one of the easiest ways to tell the difference between leopard and jaguar is by the pattern of their spots. Both jaguars and leopards have spotted coats that feature black rosettes on a cream or orange background. This pattern provides excellent camouflage for the cats in the dappled light of the forest. The rosettes effectively break the shape of the animal allowing it to merge with its environment.

An interesting study by the University of Bristol used computers to simulate what the tiger looks like to its prey, particularly to ‘dichromat’ species – those which cannot differentiate between red and green. Scientists have found that while tigers appear bright orange to humans, deer see them as green.

The same probably goes for leopards and jaguars – at least some of their prey might see them as green with black spots, virtually indistinguishable against the background of green leaves and blotchy sunlight.

Is Black panther a Jaguar or a Leopard?

The term black panther is applied to both leopards and jaguars, causing a great deal of confusion. A black panther is not a different type of a big cat. It is simply a black morph of either a leopard or a jaguar.

The black fur is caused by a genetic condition known as melanism, where the natural pigmentation turns black. If you look closely at a black jaguar or a black leopard, you will notice that the rosette pattern is still present on their coat, it is just obscured by the black pigmentation.

Melanism is a common mutation in wild cats, and it is thought to increase crypsis, the ability of the animal to avoid detection by other animals. It is, therefore, not surprising that black cats are more common in densely forested habitats where less natural light penetrates the thick canopy and a dark-coloured predator has a higher chance of remaining unseen by its prey.

Black leopards are significantly more common, especially in parts of Asia, where they are frequently seen on wildlife safaris. Black African leopards are much rarer. And black jaguars are rarer still.

The jaguar and the leopard inhabit slightly different niches in their ecosystems. As the only big cat in the Americas, the jaguar is the top predator. Its distribution and activity patterns are determined primarily by its prey availability (and by the degree of human disturbance in its habitat).

The leopard, on the other hand, is an intermediate predator that shares its habitat with lions in Africa and tigers in Asia. So, safety from the larger predators is a concern for the leopard that influences where it lives and when it hunts.

Interestingly, there are very few records of man-eating jaguars, while the leopards are known for targeting humans as prey. Jim Corbett, the British hunter who lived in India in the early 20th century recorded two man-eating leopards that have killed 400 and 125 people, respectively. Occasional attacks of leopards on people are still reported from rural India.

Swimming and Love of Water

Jaguars and leopards both can swim very well, but jaguars love water and specialize in hunting caiman and capybaras on the riverbanks. Leopards generally avoid water and don’t tend to hunt crocodiles, preferring deer and other terrestrial prey.

Both the jaguar and the leopard are ambush hunters. They painstakingly sneak up on their prey until they are within striking distance. The final charge is the sudden burst of speed and power.

Having a lighter, longer body, the leopard is a little faster than the jaguar. It can reach a speed of 56-60 km/h. The jaguar, however, is no lazy sloth and can charge comfortably at 50 km/h.

The jaguar (Panthera onca) is unique among big cats in that, all the jaguars, ranging across 18 different countries belong to the single interconnected population, there are no different subspecies of the jaguar.

The leopard (Panthera pardus), on the other hand, is distributed across multiple isolated populations from South Africa to Sri Lanka. The total number of leopard subspecies has been debated over the years, but as of 2017, the Cat Classification Task Force of the Cat Specialist Group recognizes the following 8 subspecies.

However, some of the leopard subspecies are in greater peril than the species overall.

The Amur leopard of the Russian Fareast is one of the most endangered wild cats on earth, with less than 100 individuals remaining in the wild. It is listed as Critically Endangered and faces a serious risk of extinction.

The Javan leopard is restricted to the Indonesian island of Java. With approximately 250 individuals remaining in the wild, it is also listed as Critically Endangered.

The Persian leopard occurs from Turkey and Iran into Afghanistan and Central Asia. Its current population is estimated at fewer than 870-1290 mature individuals and considered declining, despite being listed as Endangered on the IUCN Red List.

Where to see jaguars and leopards in the wild

Leopards have a much wider distribution, making them easier for the two cats to spot in the wild. Most African safaris will give you a good chance of seeing a leopard, as well as a visit to Udawalawe National Park in Sri Lanka.

For the best chance of spotting wild jaguars, head to the Brazilian Pantanal to the small fishing community of Porto Jofre, which is developing a reputation as the jaguar watching capital of the world.

And before you go, here’s a chance to practice your observation skills. Can you spot the difference between leopard and jaguar? The correct answers are in the comments below. Here is a summary of the distinguishing features first.

Jaguar vs Leopard Self Quiz

Check your answers in the comments below.