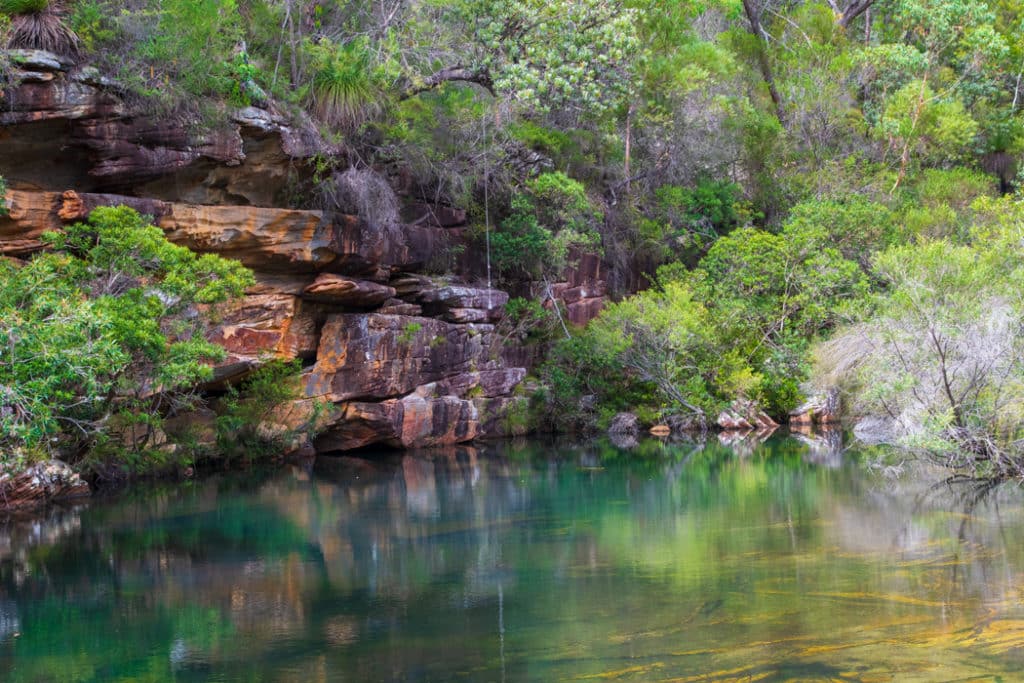 Looking for a tranquil swimming hole in Sydney? Check out this stunning spot on Kangaroo Creek, Royal National Park.

Kangaroo Creek in Royal National Park hides many secret swimming holes concealed along a network of barely-trodden trails. In this post, I am introducing one of these secrets – a spot as stunning as it is tranquil.

Exploring Royal National Park with my friend Steve is always an adventure. Steve is not one to follow well-trodden trails, he probably blazed some of these trails over the years. So for our last adventure, we went looking for a secret swimming hole on Kangaroo Creek that he hasn’t visited for a few years.

As you read this post, please keep in mind, that pristine places like this swimming hole will only remain pristine if we treat them with care. See Vivienne’s comment below about the damage done to the area by disrespectful visitors. Avoid using sunscreen or any other chemicals on your skin if you wish to swim in the creek.

Also, keep in mind that you need some navigational experience to reach the swimming hole. If you are a novice bushwalker, please don’t attempt this walk on your own – people do get lost in this area and there are no clear or signposted trails.

The start of the trail was easy. We parked at Audley at the Currawong Flat picnic area and headed towards the signpost for Robertson Roundabout near the bathrooms. Without any preamble, the trail began as a set of steep stone stairs leading to the top of the ridge above Audley and the Hacking River.

Once we reached the top, we came to a signposted junction and took the trail to the right, Engadine Track, following the signs to Kangaroo Creek. At first, the trail descended gently through lush eucalypt forest peppered with wonderfully gnarly angophoras. Since we were on top of the ridge, we could see the forest stretching forever. This part of the National park has never been logged, so it looks exactly the way it did for thousands of years. It always amazes me that you can find such well-preserved areas within an hour’s drive of Sydney CBD.

And there wasn’t a single soul on the trail with us. Out of what seemed to be hundreds of people at Audley, no one felt inclined to follow a steep unmarked trail past the public bathrooms.

A side benefit of this trail being largely deserted was the abundance of reptiles that we spotted on the walk. We saw a Goanna at Audley and now added skinks and dragons to our list.

After a while, we reached a set of steep metal ladders, the last of which brought us to the level of the creek where Engadine and Kangaroo creeks meet. It’s a very picturesque area with a few places to swim in and plenty of flat rocks to sit on. The only people at the creek were a couple of walkers who were leaving just as we arrived.

There are a few little waterfalls to check out here and some pretty interesting rocks. One particularly huge boulder lying over Kangaroo Creek must’ve tumbled down from the escarpment a long time ago. It looks wonderfully out of place on the flat creek bed.

Towards the Secret Swimming Hole

After poking around the confluence of the creeks for a bit we headed back to where the ladder meets the creek bank. The trail from here on was practically indistinct, but it was not difficult to follow. At first.

We turned left from the stairs and walked along the rock ledge above Kangaroo creek keeping the creek on our right. But after about 250 meters, the trail came to an end. Later we realized that we should’ve crossed the creek here and continued on the other side. There is even a little cairn perched on top of the rock here to mark the spot. There is also an unusually-shaped tree trunk that can be used as a landmark (seem the image below).

We, of course, missed all the signals. Since Steve doesn’t need a trail to go places, he didn’t think to look for one. Instead, he headed up the slope of the escarpment and blazed his own trail. I’m quite a fan of bush bashing and scrambling over rocks so I didn’t complain. But if you decide to follow in our footsteps and visit the secret swimming hole, do cross the creek at the end of the first stretch of the trail.

The benefit to going off trail was an encounter with an Eastern water dragon. I almost put my hand right on this guy’s tail as I was climbing over a particularly large boulder. Amazingly, it didn’t run away, just moved out of my way and sat on the rock watching me clamber past.

We tore through the bush for about 500 meters, then descended to the creek and finally crossed it. Walked for another 200 or so meters and came to a stunning swimming hole on the creek. It was framed by the orange-hued sandstone cliffs that reflected in the still dark emerald water of Kangaroo creek.

The ruggedness of the cliffs, the silence of the forest and the fact that we haven’t met any people since we left the main trail combined to give an impression of a very remote and ancient scene. There was an old rope swing hanging off a tree growing on top of a cliff that made me feel like it belonged to a civilization long since gone. It was definitely an attention-grabbing scene.

The creek is deep enough for a good swim here and the sloping rock shelf provides easy access to the water. There isn’t too much room to spread around, but there is an area of flat rocks right by the edge of the water to throw your towel.

As dramatic as this swimming hole was, that was not the spot Steve had in mind. About 100 meters upstream from this spot there is another interesting area on the creek that, depending on the water level, could also be great for swimming. It’s a much more open space with shallower water that is so clear you can see every tiny pebble on the bottom.

There are all sorts of rock ledges and holes in the creek bed that make this area fun for wading in the water, though you still can swim in the deeper part of the creek.

In one spot, there is a mini swimming hole with a perfectly straight edge that made it look like a natural infinity pool. You can see it in the image above. How does such a shape occur by natural erosion is anyone’s guess.

On the left bank of the creek, there is a great rock overhang that provides much-needed shade on a hot summer day. We found a large flat rock under the overhang and chilled out there long enough to eat our sandwiches and wash them down with hot coffee.

I would imagine this cave would’ve been inhabited by the Aboriginal people in the past, although we didn’t find any stencils on its walls.

READ MORE: Curracurrong Falls – Everything you need to know about Sydney’s most unique waterfall

On the way back, we took the ‘correct’ trail and walked down the left bank of the creek for about 700 meters, waded across and emerged right by the rock with a little cairn and that funky-shaped tree.

Back at the confluence of the creeks we heard the call of a pilotbird and spent some time exploring the forest around the creeks. In the end, Steve called in a family of variegated wrens and an eastern yellow robin, but the pilotbird evaded us.

We slowly made our way back up the metal stairs and met the third person of the day – a lone hiker heading to the creek. That’s how popular this trail is!