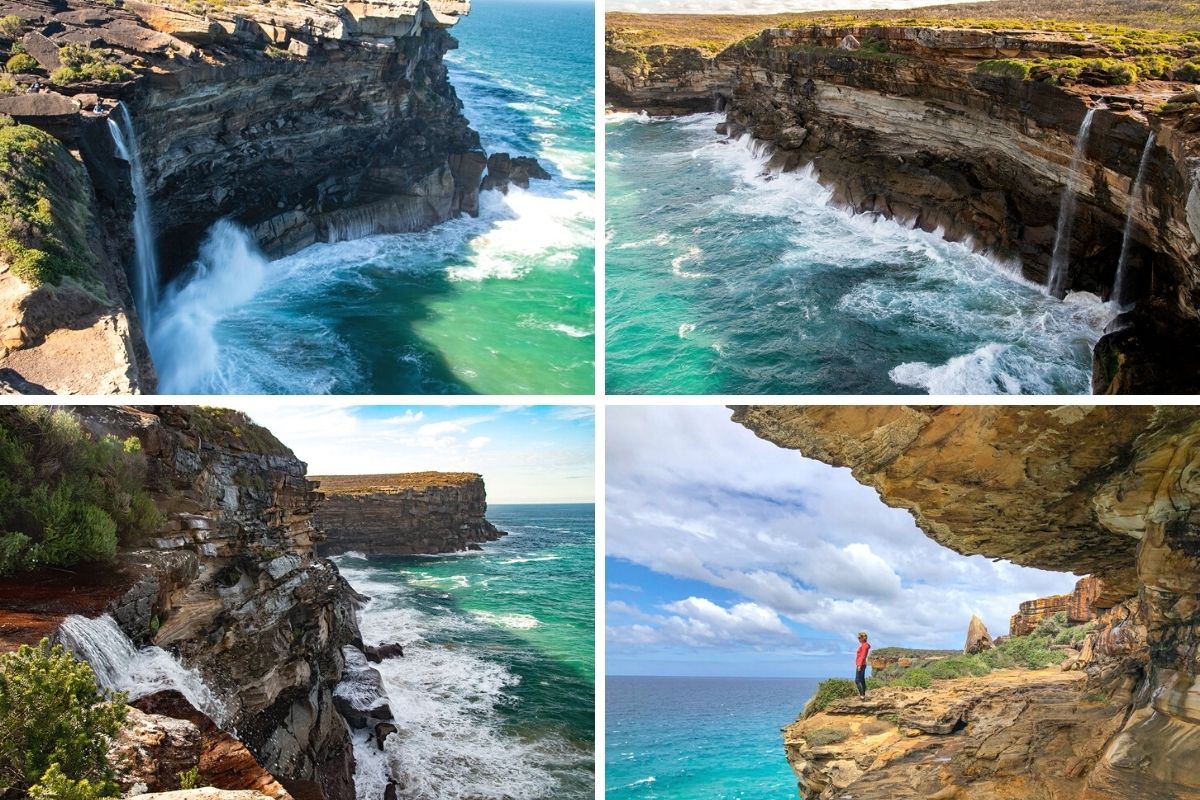 The walk from Garie Beach to Curracurrong Falls walk in Royal National Park is one of the most spectacular coastal walks in Sydney. Not only does it take you through a spectacular coastline, but it also leads to Sydney’s most unusual waterfall.

Curracurrong Falls is the only waterfall in Sydney (and one of only 3 in Australia) that flows directly into the sea. According to Wikipedia, there are only 47 such waterfalls in the world. The only two I have seen are the Sterling and Bowden falls on Milford Sound in New Zealand. But while New Zealand’s falls empty into the narrow sound, Curracurrong Falls drop straight into the Pacific Ocean.

Curracurrong Falls are fed by Curracurrong Creek and drop 82 meters from the top of the cliff towards the churning surf below. It is actually two waterfalls in one – the creek splits into two streams as it flows over the edge of the cliff.

How do you get to Curracurrong Falls?

Track at a glance

Technically, the trail is known as Garie Beach to Eagle Rock, but since the falls are located at Eagle Rock and because I find them far more interesting than the rock, Garie Beach to Curracurrong Falls seems like a better name for the track.

Garie Beach to Eagle Rock track can’t be accessed by train, so we drove to the National Park and parked at Garie Beach car park. While there were quite a few cars parked in the lot, there were hardly any people around, only a few surfers out among the waves and a couple of fishermen on the beach.

The hike starts with a stroll across the expansive Garie Beach towards the towering headland. Like most beaches in Australia, Garie beach is home to silver gulls and crested terns, one of which was so nonchalant that I was able to walk right up to it.

At the northern end of the beach, your way is blocked by an almost sheer wall of the headland, and this is where the track becomes quite strenuous. It climbs the endless succession of beautifully-hewn sandstone steps, quickly ascending 105 meters via a 510-meter track. I have to admit, I needed quite a few ‘photo’ stops to catch my breath during the climb.

The climb ends at Garie Beach Lookout, which gives panoramic views of Garie beach, the forest-covered undulating headlands of Royal National Park, and the blue-green expanse of the Pacific Ocean. This view reminds me of the sweeping vista of Port Stephens from the summit of Mt Tomaree.

The longest (2.7km) part of Garie Beach to Eagle Rock track meanders along a metal boardwalk through the coastal scrub across the headland. In July, many shrubs were in flower and gigantic shoots of grass trees towered over the scrub. There was so much new life to discover that I could’ve spent half the day on this section alone.

And all this emerging life was set against the dramatic backdrop of the rugged coastline and the bright blues and greens of the ocean. In the shallows, near the foot of the cliffs, the water was brilliantly blue-green. In Russian, we have a term for exactly this colour, literally translated as “colour of the sea wave”.

Before reaching the Eagle rock lookout, the trail crosses a gully with Curra Brook Creek running along the bottom. If you are not prone to vertigo, you can scramble to the edge of the cliff here and see the creek tumbling over the lip of the cliff towards the ocean.

From this vantage point, you can only see the top of this waterfall, but you can see it in its entirety from Eagle rock. This is not Carracurrong falls, however, but Curra Brook falls.

You get the first view of Carracurrong falls from an unsignposted Eagle Rock lookout further down the trail. From this lookout, you can see the cliff face formation known as Eagle Rock in the context of the surrounding landscape. The formation looks amazingly similar the shape of an eagle’s head, complete with an eye socket. Although from the anatomical perspective, it would’ve been the bird’s nostril.

Most people pause on this flat clifftop to enjoy the view of Eagle Rock, but if you inch your way to the edge of the cliff, you will see the entire drop of Carracurrong Falls. A word of warning: the falls are visible only from the edge of the cliff, and you need to be VERY careful approaching the edge of a 100-meter-high cliff. Rockfalls are not common, but they do happen.

There is a very picturesque concealed lookout for the falls, but it is difficult to find unless someone shows you the way. I will try my best to explain how to get to it.

There is no defined path, but what you want to do is to scramble down some rocks towards the creek, so you are just below the cliff top. Then veer right, hugging the side of the cliff to the lookout.

If you can’t find this spot, don’t worry, you can get a good view of the falls from Eagle Rock.

Continuing on the trail, we soon came to a creek crossing with stepping stones over its narrowest part. This is Carracurrong creek which feeds Carracurrong Falls.

Once you cross the creek, it is a short walk to Eagle Rock itself. You are level with the rock here, so the rock is not visible from the trail. But there is a small rough track that ducks into the bush from the main trail and emerges on the clifftop next to the top of Eagle rock.

Here, if you face south, towards Wollongong and approach the edge of the cliff (with caution!), you will get an amazing view of Carracurrong falls and the smaller Curra Brook waterfall in the distance.

As you watch Curracurrong Falls, remember how unique these falls are, you will not find another waterfall like this in Sydney or even in all of Eastern Australia. While it’s not as epic as the 268-meter-high Wallaman Falls in Queensland, it is very scenic.

On particularly windy days, Curracurrong Falls seem to defy the laws of physics and flow upwards rather than down, like in this video taken from the ABC News helicopter. It would, of course, be quite dangerous to be on the clifftops in gale-force winds like that.

The return journey follows the same trail back. And just as we thought that the top highlights of the day were behind us, we spotted a Humpback whale incredibly close to the coastal rock shelf. We watched it go into a dive as it raised its tail above water before disappearing for a few minutes. Royal National Park is one of the best places in Sydney for whale watching from the shore.

After that little bit of impromptu whale watching, we re-traced our steps to Garie beach, stopping to photograph the multicoloured flowers now and then. By the time we reached Garie beach, our feet were getting tired, so we opted for a barefoot stroll along the beach, stepping in and out of the waterline.

Is Garie Beach to Curracurrong Falls track worth it?

So, was Garie Beach to Eagle rock track worth it? A resounding yes! Even after seeing a large part of Royal National Park’s coastline, I found this track to be absolutely spectacular. And Curracurrong falls, in my opinion, are much more spectacular than the famous Wedding Cake Rock near Bundeena. In any case, Curracurrong falls are a must-see for any nature lovers in Sydney.

Each time Gaiti and I venture into epic nature, we reproach ourselves for not doing this more often. So my post-covid resolution is to take at least one outdoor adventure in Sydney every couple of weeks.

How to get to Garie Beach

Unlike the southern and the northern ends of the Coast Track, Garie Beach can’t be accessed by public transport. The easiest option to reach Garie Beach is to drive.

Drive: Garie beach is just under 54km from Sydney CBD, and the drive takes just over an hour. Parking is available at the Garie Beach Picnic area, although during the summer months, it fills up quickly.

Shuttle: If you prefer not to drive, Park Connections offers a shuttle service between Sutherland Station and Garie Beach, as well as other destinations in Royal National Park.

A sunny winter day (between June and August) is the best time to visit the falls. The trails from Garie Beach and Wattamolla run along the top of the headland, exposed to the warmth of the winter sun.

Spring and Autumn can also be good if it is not too hot. If you do decide to take one of these walks in 30+ degree heat of Sydney summer, make sure you have plenty of water with you, wear a hat and use sunscreen to avoid the inevitable farmer’s tan look.

In terms of the time of the day, early morning is always best for trail walking. But if you are a keen photographer, you will want to photograph Curracurrong Falls in the golden light of the late afternoon. Of course, then, you run the risk of running out of daylight for your walk back to either Wattamolla or Garie Beach.

What are your favourite escapes in Sydney? Share your thoughts in the commnets below.