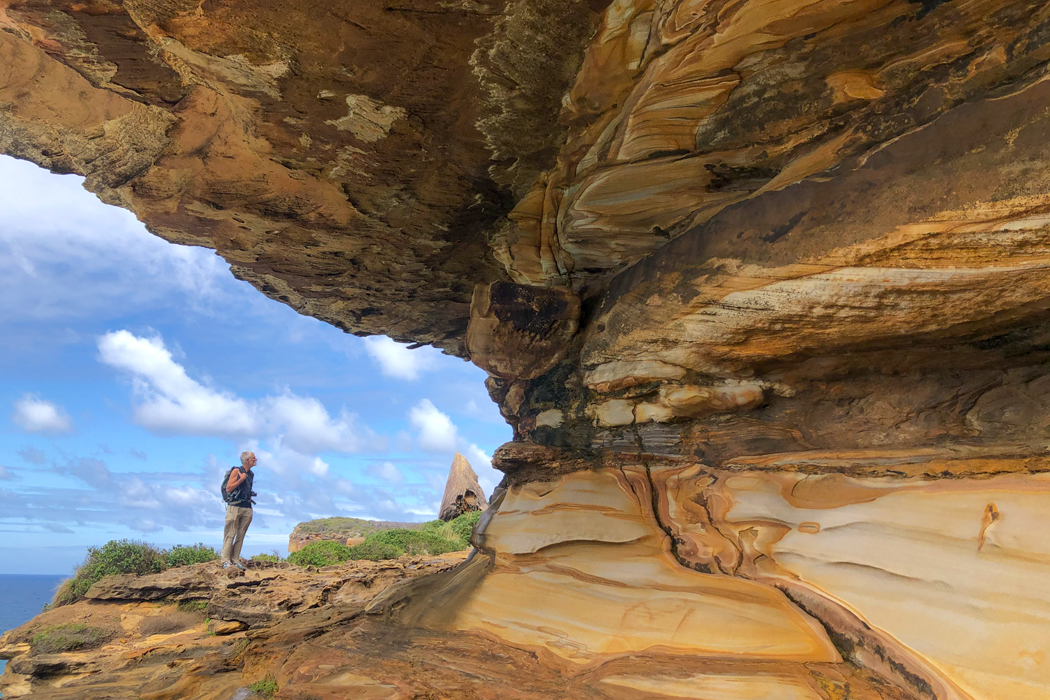 One of the best birdwatching locations in Royal National Park, Curra Moors loop track is also one of the easiest ways of getting to Curracurrong Falls as it follows a mostly flat management trail through coastal heathland. It is not as dramatic as the two coastal trails from Garie beach or from Wattamolla, but it is a beautiful walk, especially if you enjoy birds and wildflowers. For details on the two coastal trails, see this guide to Curracurrong Falls and Eagle Rock walks.

We walked Curra Moors loop trail as part of a birdwatching adventure with my friend Steve and managed to see the trail in two different settings – under a moody overcast sky on the way to the coast and under the clear sky and bright sunshine on the way back. So, in this article, you’ll get an idea of what the trail looks like in any weather.

From the car park on Sir Bertram Stevens Drive, Curra Moors track starts heading downhill through the woodland dominated by angophoras and scribbly gums. After the initial descent, the trail opens up as it enters the coastal heath that is the dominant vegetation type along most of the trail. The path is easy to walk – it is a sandy management trail that runs flat for most of the walk.

After about 2.5km the trail crosses Curra brook. You can walk across it – there isn’t much water in the brook even after the rain. By the time we reached the crossing, the sky started to clear and the temperature began to rise.

Another 200 meters along, the trail comes to a signposted fork. To the right is Curra Moors South trail, to the left is Curra Moors North. These two trails make a loop trail, so it’s not a big deal which trail you walk first.

We headed down the north fork and found quite a lot of birds. Well, if it wasn’t for Steve, who’s been birding in Royal for decades and even wrote a guide to birds of Royal National Park, we probably wouldn’t have seen many of them. Steve found us such rarities as Chestnut-rumped heath wrens, Beautiful firetails, and some of the more common but beautiful birds, like the Rufus whistlers, fantails, and White-browed scrubwrens.

One of Steve’s many talents is imitating bird calls. So what would start as a speck in the sky at first, would eventually materialize into beautiful birds that came to investigate the strange calls. That’s how we got to watch an adorable family of four Chestnut-rumped heath wrens – one of the species that serious birders come to find in Royal. Another species high on most birdwatchers’ lists is the emu-wren – an adorable little critter with a fine tail, that I am yet to see.

The birds we didn’t have any trouble spotting were the magnificent Yellow-tailed black cockatoos feeding on banksia seeds in the bushes growing along the trail.

As more of the blue sky appeared, it transformed the landscape into a colourful palette of greens, reds and yellows, framed by the distant blue of the ocean that now looked much more enticing.

The second crossing of Curra brook broke up the trail about 540 meters after the fork, reminding us that at the end of the walk, Sydney’s most unique waterfall was waiting for us. From the second crossing, it’s just under a kilometer to the coast where Curra Moors track meets the Coast Track that runs along the cliff tops between Bundeena and Otford.

There was just one more thing we wanted to check out before heading to our very scenic lunch spot at the undercliff lookout. Steve knows a spot where a colony of Cunningham skinks lives in the cracks between the rocks. They are hard critters to spot in Royal, unlike at the Jenolan Caves in the Blue Mountains where they are hard to miss. But even there, when you do spot them, you usually only catch a view of a rapidly retreating back end.

So when we got to the boardwalk of the Coast Track, we took a slight detour to see these large skinks. They picked a very scenic spot for their colony – right on the edge of the cliff with stunning ocean views about 200 meters from the end of Curra Moors track towards Garie beach.

READ MORE: Australian Animals – The Wierd and Wonderful Creatures of Down Under

After watching the skinks for a bit, we returned to the spot where Curra Moors trail meets the Coast Track right next to Curracurrong Falls. This waterfall is quite unique – it’s the only waterfall in Sydney (and one of only three in Australia) that flows directly into the ocean. You can view Curracurrong Falls either from Eagle Rock or from a very picturesque undercliff lookout right here at the coastal end of Curra Moors loop track.

READ MORE: Curracurrong Falls – Everything you need to know about Sydney’s most unique waterfall

The undercliff lookout is a very scenic spot. To find it, follow the elevated boardwalk towards Eagle Rock until the trail veers left towards the Curracurrong creek crossing. Here, instead of following the boardwalk, jump down onto the rocks and walk straight ahead towards the cut in the cliff where Curracurrong creek runs off the edge of the cliff and plunges into the ocean below.

There is no trail as such here, but you only want to climb down to the lower rock ledge and then follow it to the right as it hugs the cliff face. As soon as you walk under the cliff, you’ll know you’ve arrived.

The waterfall is only visible from the edge of the cliff. But once you’ve checked it out the huge overhang provides a super scenic spot for a picnic lunch.

There are also some interesting rock formations here to check out before climbing back to the top of the cliff. And of course, during the humpback migration (May to October), it is a good perch for spotting whales as they cruise between their feeding grounds in Antarctica and their calving grounds on the Great Barrier Reef.

Once you are ready for the return trip, you could retrace your steps the way you came or complete Curra Moors Loop track by following the Coast Track towards Garie beach for 2.3 km until you come to the junction with Curra Moors South trail and follow that trail back to the car park.

How to get to Curra Moors Track

The only way to reach Curra Moors trail is by driving.